Water-level meeting: not a happy camper in the house

People came to last night's forum on Great Lakes water levels with stories on their lips and anger in their words.
Jun 14, 2007 11:11 AM By: Carol Martin 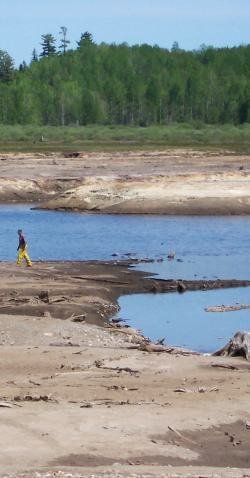 People came to last night's forum on Great Lakes water levels with stories on their lips and anger in their words.

"What was happening last year that caused the Lake Superior shoreline to migrate 300 metres out?" asked Frank O'Connor of Batchawana Bay.

Dave Edgar told how the water level on his dock dropped 15 inches between September 13 and October 17, 2006.

Pat Sheppard said the water went down 24 inches in one year at Batchawana Bay.

All present wanted to know why.

- John Kangas from the Great Lakes and Ohio River Division of the U.S. Army Corps of Engineers in Chicago

Everyone wanted to know what the Joint International Commission (IJC) was doing about the problem and what they themselves can do about it.

Shirley Russell of Gros Cap demanded to know why something wasn't done sooner and what sort of shape the lake will be in when the commission finishes its five-year study of problems affecting water loss in the Great Lakes.

The IJC recently announced initiation of the $17-million study to try to determine exactly how much water the lake is losing, why and how.

Last night, the IJC member on hand, Tom McAuley, was called to task for what people said was ineffective management of lake levels.

"I'm sorry I have no good news for you," said McAuley. "I wish I could give you a simple answer, but I can't."

During his presentation, David Fay from the weather office talked about problems that he said may seem simple at first glance, but are in fact very complex.

"For the past nine years, Lake Superior net basin supplies have been at a net loss," said Fay. "This mean that more water is leaving the lake than is going in."

Fay said water finds its way into the lake from runoff, precipitation and upstream lakes.

Water leaves the lake through outflow, evaporation and consumption.

In response to questions about American projects that divert water from the Great Lakes, the IJC's McAuley said that such projects are carefully monitored.

The IJC does its best to monitor both outflow and consumption and to regulate both of these through diversion projects that may affect water levels in the whole Great Lakes system and ultimately Lake Superior, he said.

"In my mental notes I have a subcategory for diversions," McCauley said. "I call it water the Americans are stealing from the lake."

McAuley said that the IJC is an independent body consisting of both Americans and Canadians and that he knows the Americans are not stealing water from the lake.

"It's climate change," he said. "Lake Superior is a very large lake and it hasn't frozen over in years."

McAuley and Fay agreed that more water is evaporating from the lake between the months of September and February in recent times than ever before in recorded history.

"The lowest level in the lake was in 1926 and we are just one centimeter above that right now," said weatherman Fay. "I expect it will drop below that by September this year."

Fay said he's seen credible models that predict catastrophic water loss in the lake over the next few years as well.

When asked why people seem so reluctant to hear that climate change is to blame for dropping lake levels, Fay said it's because they want a quick fix.

"You've heard what they said about diversion projects and dredging and other myths," he said. "They are looking for some tap they could just magically turn off and things would get back to normal."

Fay said the truth is much more complex and the five-year study recently begun by the IJC is just the beginning of the work that needs to be done to find out why lake levels are dropping.

"When it comes to climate or weather or natural things, people are naturally frustrated because those are things they can't control," he said.

But he also said it's too early to tell whether the climate changes affecting the Great Lakes are part of a natural cycle or man-made.

"We won't likely be able to prove that it is or is not part of a natural cycle in this five-year study either because there are just so many variables in the study of climatology," Fay said. "But most of the models do predict that in 40 to 50 years from now the lakes will be lower because the planet will be warmer and there will be more evaporation."

Fay said that people on the shores of Lake Superior better be prepared for a lot more fluctuations in water levels over the coming years.

If nothing else, climate change has proven to be variable, he said.

The different models for climate change Fay has seen predict that, by 2050, levels in Lake Superior will fall between 12 and 36 more centimeters at highly variable rates, depending on rainfall and other environmental factors.

(NOTE: The photo used to illustrated this article was taken recently by a SooToday.com reader on the Montreal River. Here's the note he sent us to accompany it: "Where is all the water? Not only is Lake Superior low, so is the Montreal River basin. The water level is at least 25-30 feet below normal levels.)