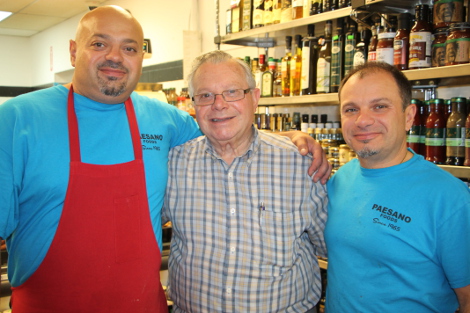 Loyal customers, friends and family dropped by the store at 305 Wellington Street West to enjoy espresso, desserts and samples of delicious Paesano food.

Business owner Eugene (Gigi) Palarchio told SooToday the secret to Paesano Foods success, apart from good old fashioned hard work and innovation, is that “a lot of my customers are friends.”

Paesano Foods has certainly made a lot of them over the past 50 years.

Palarchio estimated the store serves between 300 to 500 customers a day, Monday to Saturday.

“A lot of them drop by just to say ‘hi,’ which is nice,” Palarchio said.

Gigi, who began helping out in the store as a child, eventually became co-owner of the business with his father and uncle Eugene Buffone (now deceased).

Gigi has been the sole owner of the business for the past six years.

Gigi’s brother Fiore has worked at the store for the past 21 years.

Occasionally, Gigi’s daughter Nikki helps out in the store.

Palarchio family members have also started other businesses in the local food sector.

What sets Paesano Foods apart from the rest?

“We grew from being an old fashioned butcher shop to adding prepared foods (including the original Paesano Dinner for Two), frozen entrees and specially marinated meats ready for your oven or barbecue,” Gigi said.

“All you’ve got to do is cut the bag and barbecue them.”

“We started that kind of innovation and took it to a different level and a lot of people have imitated us…we were the first people to do marinated meats packaged for your convenience and now you see it everywhere,” Gigi said.

“We’re very specialized, we’re innovative with a lot of different varieties of sausage (about 25 varieties, he estimated), a lot of people imitate us.”

“Probably there’s no other small place like this that does the volume we do,” Gigi said.

Many Paesano Foods staff members are long-serving, and have become like family members, Palarchio said.

Among them are Emily Lepore with 35 years of service, Nella Romano with 21, Ron Millette with 24.

“My whole family’s passionate about food.”

“The experience we have with food, we have lots of knowledge, so if people come in here we give them recipes, and we give them advice, if we don’t have something in stock we’ll find it.”

“My Dad has always taught me to make the customer happy and feel important so that when they leave they’ll want to come back…we go that extra step and give them an espresso if they want it, they feel like coming here is like an experience.”

All of this, Gigi said, sets Paesano Foods apart from the big chain grocery stores.

Competition is something Gigi doesn’t worry about.

“My Dad always told me never try and be like the competition, do your own thing and be innovative and never mind what everybody else does.”

“We’ve seen the competition imitate us.”

Now 52, Gigi says “I enjoy what I do, and I’m going to stay in this as long as I can and hopefully we’ll celebrate a 75th anniversary.”

“You can still have a small business and be successful if you’re willing to work hard.”