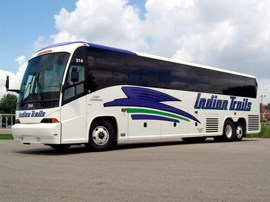 For the over 36 million Americans who experience hearing loss, a motor coach trip creates a struggle to hear which stop is next or listen to the tour guide explain the history of an area.

No longer for patrons of Indian Trails, Inc., which has aspired to be the first company in the United States to install hearing loop technology in a motor coach.   “Why should hearing loss prevent you from enjoying a motor coach trip?” asks Jeff Deason, sales director for Indian Trails.

Hearing loops transmit audio signals via a magnetic field created by a wire that loops around the interior of the coach.

The transmitter is attached to the audio/video system.

A hearing aid equipped with a telecoil can pick up these signals, somewhat like Wi-Fi, and the sound is reproduced in the ear without the extraneous noise or blurring that many users experience with hearing aids.

Todd Billin, president of Hearing Loop Systems of Grand Rapids, Michigan, notes that: “Inductive loops are the only real hearing assistance solution for transportation and transient applications. Busses (city and tour), trains and subways all present special challenges to communicate to passengers, especially those with hearing loss.”

Hearing loops have been in use in the United Kingdom and Europe for many years with systems in a host of different public settings, but they are just now gaining popularity in the United States.

The systems were recently installed in 488 New York City Transit information booths and the New York City Taxi and Limousine Commission recently approved hearing loops for cabbies who want to install them in their vehicles.

The system was also featured on NPR’s Science Friday (July 2010).

“I was driving between sales calls when I heard the Science Friday program,” said Deason. “My father suffers from hearing loss and I thought it was a natural fit for a coach. I did a little research and it turns out that Michigan is a hotbed of hearing loop systems, with almost all the churches on the west side of the state having had the system installed. As church groups make up a large share of our business, it just makes sense.”

Deason contacted Billin, who worked with the engineering firm Contacta, Inc. to come up with a motor coach solution.

“This is the first such installation in the U.S. that I am aware of,” he says. “While I found the bus to be quiet overall, without the loop, I was unable to understand either audio source through my hearing aids. With the installation, I experienced clean, clear sound from both the onboard audio-video system and the microphone.”

Deason says that with both charter and intercity service, it is a great asset to Indian Trails customers to have the ability to hear announcements.

“The cost is relatively small and it appears that there is very little maintenance required. It is in operation when the coach is running.”

The number of people with hearing loss is projected to double from the current 36 million within the next decade.

In the summer of 2010, the Hearing Loss Association of America and the American Academy of Audiology launched a “Get in the Hearing Loop” initiative to educate and promote the use of hearing loops.

An audio sample that demonstrates loop technology can be heard here.

Indian Trails, Inc. operates one of the largest and newest fleets of deluxe motor coaches in Michigan.

Services include charters, tours, shuttles, airport transfers, casino runs and daily scheduled routes throughout Michigan and into Chicago as well as Milwaukee.