(Updated) Terry Sheehan hustles us a piece of Snow Cake 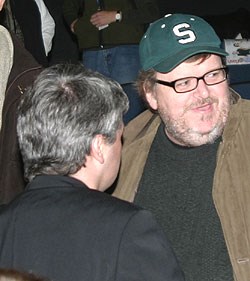 And we've further learned that, as a result, the Snow Cake team is now thinking of filming as many as six scenes here in the Sault.

The film's location manager will be here next week on a scouting trip, with Sheehan serving as tour guide.

You'll remember that it was Sheehan who spearheaded the City's bid to have the Canadian Music Hall of Fame established on Sault Ste. Marie's waterfront.

That was on Monday, February 21.

And the Ward 2 Councillor has been busier than a beaver ever since.

Sheehan invites Moore to shoot here By Friday of the same week, Sheehan was picking Michael Moore's brain for advice on attracting more film productions here, suggesting that the Sault would be a great place to film for Moore's upcoming documentaries.

Moore's previous work, including the Academy Award-winning Bowling for Columbine, has painted Canada as a peaceful, caring nation.

(EDITOR'S NOTE: Our imagination goes into overdrive on the idea of Michael Moore doing interviews here. We encourage readers to use our News Response forum to offer suggestions on who Michael Moore might 'ambush' in the Sault and why.)

Sheehan followed up with a note to Moore, enclosing a Soo Greyhounds cap so the filmmaker will be suitably apparelled during his next visit to the Sault.

Sheehan was also quick-like-a-bunny to follow up on SooToday.com's disclosure last month that Sigourney Weaver was coming to Wawa to film Snow Cake with a joint Canadian-U.K. production team.

On March 3, when Welsh director Marc Evans and production manager Bora Bulajic were meeting SooToday.com's Carol Martin, MCTV's Jennifer Keating and other local media goddesses in Wawa, Sheehan spent an hour on the phone with Snow Cake location manager Anthony Kadak, a veteran of such films as F/X 2, American Psycho 2 and Cube 2: Hypercube.

Sometime this coming week, probably on Tuesday, Kadak will be in the Sault to scout some locations.

Kadak will look at some highway locations near the Sault.

Within the City, he wants to see some intersections, some truck stops and some restaurants with drive-throughs.

He also wants to scope out the Sault Ste. Marie Airport, both as a possible location and for its logisitics capability for handling all the stuff that must be brought north for the production.

Sheehan is also rendering assistance in other ways.

A former lodge manager at Searchmont, he's trying to wrangle snow-making equipment for the Snow Cake production team, who have twigged on to the fact that even a place like Wawa might not have tons of fresh fluffy snow in April.

Your 15 milliseconds of fame

And Sheehan will talk to Kadak this week about recruiting extras for the film.

Some involved in the production tell SooToday.com they're not sure Wawa will be able to provide all the extras needed and some recruiting may be done in the Sault as well.

If you're interested in appearing in Snow Cake as an extra, be sure to check SooToday.com frequently for further updates.