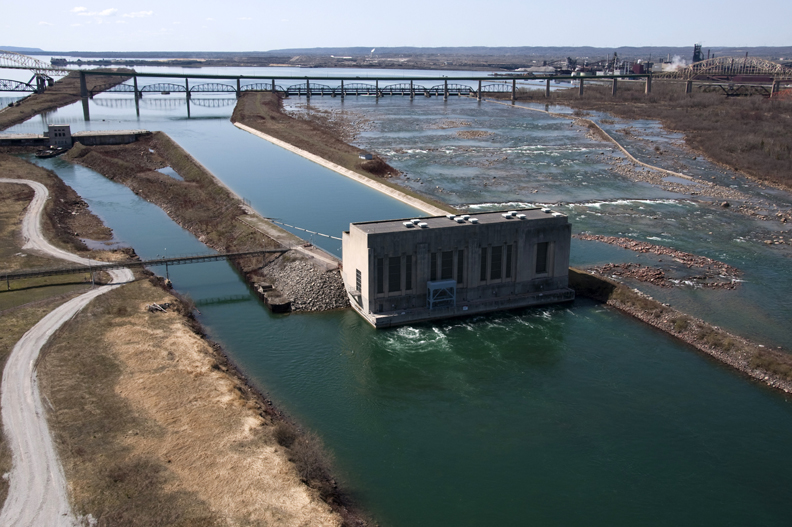 This amount is 800 m3/s greater than the July outflow.

This outflow is as prescribed by Plan 1977-A.

The August outflow will be released by discharging about 2128 m3/s through the three hydropower plants and passing most of the remaining flow through the control structure at the head of the St. Marys Rapids.

The gate setting of the control structure will be increased to six gates fully open on 1 August.

As a result, the flow and water levels will increase significantly in the St Marys Rapids.

Although there will be no change to the setting of Gate #1 which supplies water to the channel north of the Fishery Remedial Dike, with six gates fully open in the main rapids, water will overtop the dike along the north side of the rapids.

This past month the water supply to the Lake Superior basin was well above average while that to the Lakes Michigan-Huron basin was below average.

Currently, the Lake Superior level is about 6 cm below its long-term average beginning-of-August level, and 16 cm above the level recorded a year ago. It is 26 cm above its chart datum level.

This past month the level of Lake Superior rose 14 cm, while on average it rises 4 cm during the month of July.

The level of Lake Superior is expected to fall slightly or remain stable during August.

The level of Lakes Michigan-Huron remained stable this past month, which is typical during July.

The level of Lakes Michigan-Huron is 48 cm below its long-term average beginning-of-August level, and is 6 cm higher than it was a year ago.

Lakes Michigan-Huron is 8 cm above its chart datum level.

The level of Lakes Michigan-Huron is expected to fall slightly or remain stable during August.

The Board continues to monitor conditions both on Lake Superior and downstream, and will advise the International Joint Commission accordingly on those conditions.

Mr. Jaymie Gadal is the Board Member for Canada.

BG Margaret Burcham is the United States Board Member.

Additional information can be found on the Internet at the Board’s homepage: