A Coast Guard Auxiliary aircrew conducted an overflight of the area Sunday morning and reported no signs of pollution
May 30, 2016 10:00 AM By: SooToday Staff 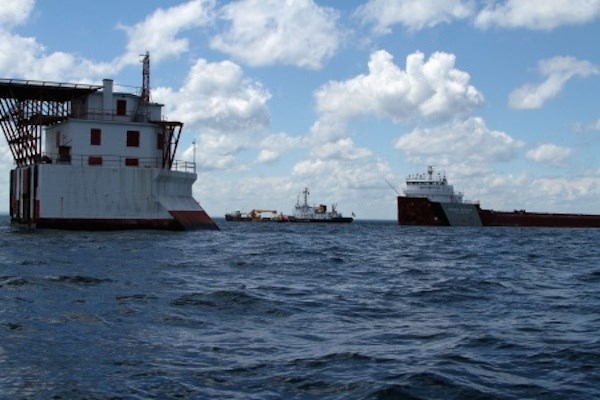 **************************
SAULT STE MARIE, MI - The Coast Guard continues to monitor and respond to the motor vessel Roger Blough, Sunday, after the vessel ran aground Friday afternoon on Gros Cap Reef in Whitefish Bay in Lake Superior.

Plans continue to progress to safely free the Blough from Gros Cap Reef in conjunction with Canadian partners and company representatives.

The Coast Guard Cutter Mobile Bay, homeported in Sturgeon Bay, Wisconsin, has arrived on scene and a 500 yard safety zone has been established around the Blough to protect passing vessels from potential hazards associated with salvage operations.

Sault Ste. Marie Vessel Traffic Service has also increased its measures on commercial traffic to ensure the safe passage of shipping near the safety zone.

The Roger Blough has activated its vessel response plan, taking precautionary measures to ensure safety of the the environment.

This includes coordination with their oil spill response organization to deploy oil containment equipment as well as underwater dive surveys to more effectively assess the damage and unground the vessel.

“All indications thus far seem to reveal that the damage is in the forward section of the vessel and all fuel tanks are in the rear section,” said Ken Gerasimos, a representative of Key Lakes Inc., the operating company of the Roger Blough. “No fuel tanks are connected to the outer skin of the ship.”

A Coast Guard Auxiliary aircrew conducted an overflight of the area Sunday morning and reported no signs of pollution.

The chance of a fuel spill remains minimal and flooding on the Blough remains stable.

The crew remains in good condition.

The National Transportation Safety Board is scheduled to arrive on Monday, May 30, to assist the Coast Guard in the investigation into the cause of  the grounding.

More information will be released as it becomes available.