With absolutely no fanfare, the first passenger train operating under the Railmark moniker left the yard Thursday morning even as an agreement with the city remains unsigned. 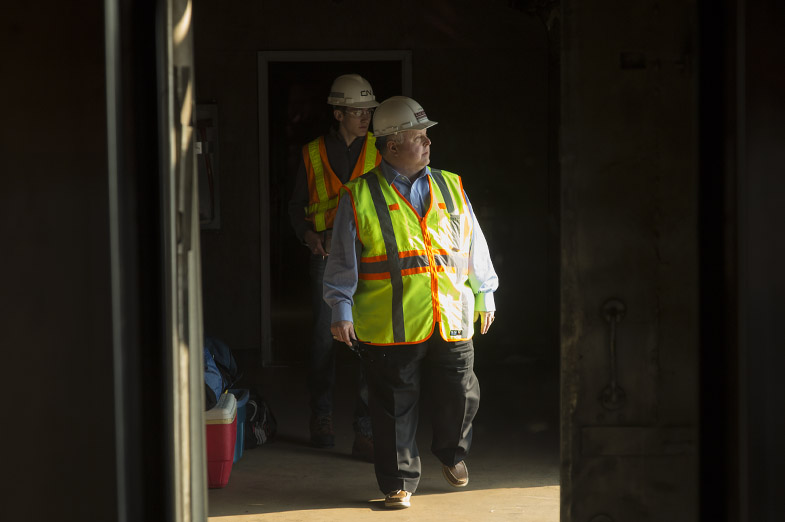 With absolutely no fanfare, the first passenger train operating under the Railmark moniker left the yard Thursday morning even as an agreement with the city remains unsigned.

The company was to have taken over operation of the Sault to Hearst passenger service from CN as of Friday, but B. Allen Brown, president and CEO of Railmark, said the unsigned agreement with the city of Sault Ste. Marie is the cause of the delay in service.

“That was causing some concern with my bankers. We were in a chicken and egg mode for the last few days,” said Brown, who was at the CN yard on Carmen’s Way Thursday to see his company’s first train leave Sault Ste. Marie.

Sault Ste. Marie Mayor Christian Provenzano said city council agreed to prepare an agreement between the city and Railmark in principle, passing a resolution during the April 13, 2015 meeting, but he has not seen the final agreement.

The city is in charge of distributing subsidy money from the federal government to Railmark.

“We have to know what we are entering into and what the consequences are. Those agreements haven’t crossed my desk as of yet,” said Provenzano.

He said questions regarding the delay of the agreement should be directed to Tom Dodds, CEO of the Sault Ste. Marie Economic Development Corporation (EDC).

“The EDC has been quarterbacking this,” said Provenzano

Absent for today’s departure was any kind send-off that may have been expected from the likes of city administration, such as Dodds or Provenzano or the Coalition for Algoma Passenger Trains (CAPT).

A CAPT event celebrating the 100th anniversary of the service was held last Spring, complete with balloons, banners and musicians playing throughout the 300-mile journey.

In March, CAPT organized an event at Mill Square in Sault Ste. Marie which featured live music, food and drink and which served as a sort of trade show for businesses who depend on the line.

So why not hold a similar event celebrating the operating of the first Railmark train on Thursday?

“I think there was still some wondering if it was going or not,” said Linda Savory-Gordon, co-chair of CAPT.

Railmark was selected in the fall by CN from among three companies that bid to take over the run, and the ACR Passenger Service Stakeholders Working Group, of which Dodds is a key member, lobbied the federal government to provide funding to allow Railmark to take over.

On April 1, MP Bryan Hayes announced the government of Canada would provide $5.3-million subsidy over three years to continue operation of the service.

Dodds said on Monday he was concerned about the transition and Provenzano echoed that statement this morning, in regards to the Agawa Canyon Tour Train.

“It is my understanding the tour train might not have the infrastructure to make bookings for this tourist season,” Provenzano said by phone.

“If that is the case it’s a real alarm and cause for concern,” he added.

Calls to Dodds for comment today were not immediately returned.

Tammy Jacobson, the solitary passenger on-board when the train pulled away from the CN Rail yard, had her choice of seat on the train.

“Nobody else knows the train is running, if I hadn’t called I wouldn’t be here,” she said.

(PHOTO: Railmark president and CEO B. Allen Brown tours the boxcar of the Algoma Star Passenger Train prior to it's departure Thursday morning from the CN Rail yard in Sault Ste. Marie. Kenneth Armstrong/SooToday)