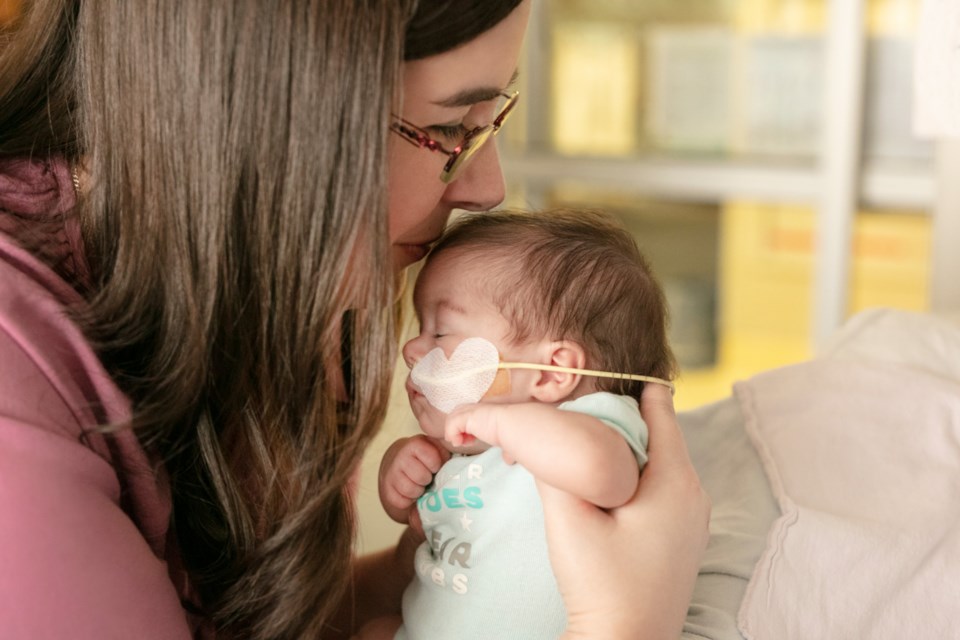 Seven-month-old Leah Sperry of Sault Ste. Marie is the smallest cystic fibrosis patient in the history of Mount Sinai Hospital in Toronto.

Heather and Brad Sperry were pregnant with Leah when a routine ultrasound in July 2018 detected problems.

Heather was then referred to both the genetics and high-risk obstetrics programs at Mount Sinai Hospital, which required her to travel from Sault Ste. Marie to Toronto on a weekly basis.

“From there, we were coming down every week for tests and procedures and checkups,” Sperry said. “Genetic-wise, we wound up being clear and things were okay, but from that, there was a problem detected with the pregnancy - similar to what we had also had happen to our son.”

But the Sperry family now had a new situation to deal with, as Leah went to Mount Sinai for further testing.

“That referred us into the high-risk obstetrics program at Mount Sinai,” said Sperry. “So then they were following us every week - we were either flying or driving down for that, and then in October, things started to change and it was becoming more problematic, so they admitted me to Mount Sinai for daily monitoring and ultrasounds.”

While in Mount Sinai’s antenatal inpatient unit for intensive monitoring this past fall, Leah’s heart rate became irregular due to the placenta not functioning properly.

“The decision finally came in November, when things were getting a lot more critical that the baby had to be delivered,” Sperry said.

Leah Sperry was delivered just six-and-a-half-months into pregnancy Nov. 4, 2018, weighing in at a mere 680 grams.

Just to put that into perspective, Sperry says Leah could have probably fit into a large Tim Hortons coffee cup.

Then, just five days after Leah was born, her father, Brad, fell ill and was taken into Mount Sinai’s emergency department.

Diagnosed with supraventricular tachycardia (SVT), pneumonia and mono, Brad was unable to see Leah for the first few weeks of her life.

“They found out that he had a cardiac issue going on as well, as he was very sick,” said Sperry. “So then he was unable to go into the NICU because [it was] just too much infection and control risk for our daughter and all the other children.”

“So then he was basically isolated.”

Meanwhile, Dr. Sharon Unger - a doctor at Mount Sinai who also serves as medical director of the province’s human donor milk bank there - knew that something wasn’t adding up when observing some of Leah’s symptoms.

“We obviously didn’t know that she had cystic fibrosis at that time,” Unger told SooToday. “Her Mom kept saying to me, ‘she’s coughing and she’s sneezing,’ and I’ve never seen a baby who’s essentially a pound-and-a-half cough and sneeze and so on before. That doesn’t happen in the first couple of weeks of life in such a small baby.”

“So I kept trying check her for various viruses that were going around in the community, I kept thinking, ‘does she have a cold? What’s going on?’ Her Mom was describing all the symptoms of CF - we just didn’t put it all together until the blood work came back and explained what was going on,” she continued. “But her mother was so observant, she was really telling me what was going on, and I was trying hard to figure it out, to pay attention to the mom - we kept testing and testing, but it took that newborn screening to come back for us to figure it all out.”

On day 21 of Leah’s life, she was diagnosed with cystic fibrosis following a number of medical episodes due to respiratory and digestive issues.

Leah and her mother were transferred to the respirology department at The Hospital for Sick Children Feb. 25.

They’ve been there ever since, but it hasn’t been an easy ride.

“She’s had four coding critical staff assist events, and the last one, which was here in March, she had fully coded - it was a code blue, required four minutes of compressions,” said Sperry. “That as a very close one.”

Sperry says her husband regularly travels between Sault Ste. Marie and Toronto with their two-and-a-half-year-old son, Kevin, in tow.

“It’s stressful, and it’s hard for him, because he’s the one going back and forth, and someone has to work,” she said. “He has home life that he’s trying to juggle, as well as everything that’s going on down here.”

“It’s been challenging, and it’s been hard for him because he can’t be here for the day-to-day of what’s going on with her [Leah], and he’s also managing everything at home.”

Sperry is grateful that so many people from Sault Ste. Marie and Toronto have stepped up to help the Sperry family, including family members, the Twinkie Foundation and Emmanuel United Church.

“The Sault really has stepped up to help us quite a bit, which is so appreciated,” she said.

The Sperry family will eventually be going back to Mount Sinai Hospital in order to attend long term follow-up clinic, and will continue to take Leah there for the first three years of her life.

“I really look forward to seeing them back,” Unger said. “It’s really pretty cool for me to be able to take care of such a small, fragile, sick baby.”

“In a year-and-a-half, she will sit down at the table and colour with me, and in three years when we see them back, she’ll be talking to me. That’s a really neat part of my job.”

Sperry, who has now had health issues affect both of her children, says that the health problems that have plagued her family have made her grateful for the time that she spends with them.

“It’s the wildest roller coaster ride you could possibly imagine,” she said. “It is. It’s very difficult, but they’re your kids. You do what you have to do, and you get through it.”