Frustrated with city police, some downtown business owners are now talking about taking the law into their own hands
Sep 11, 2020 8:42 AM By: David Helwig 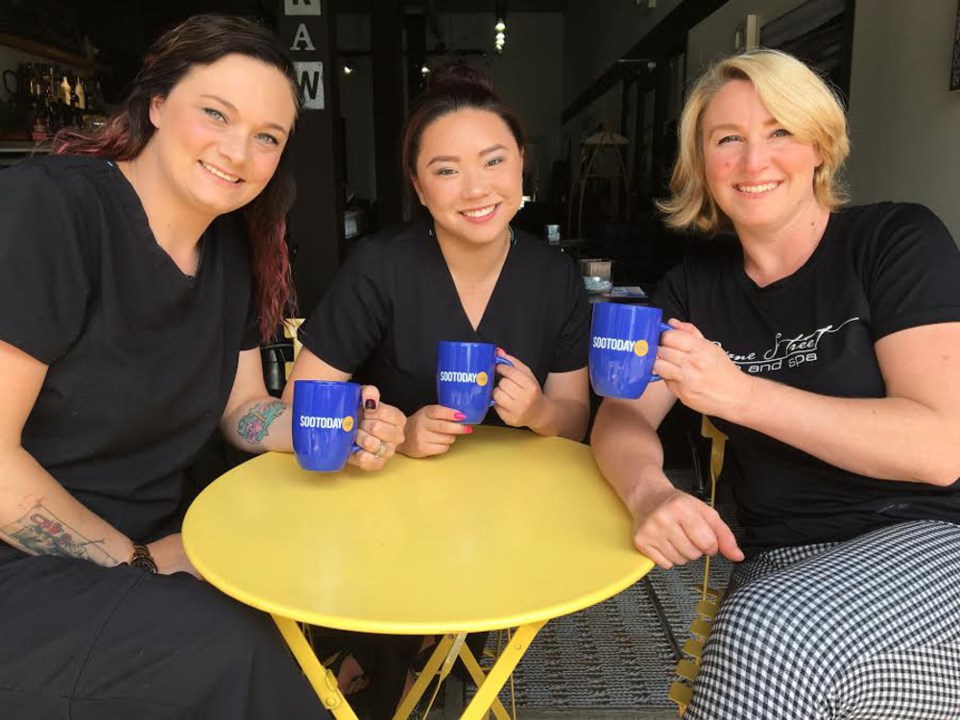 Krista Nolan is shown at right with Mane Street employees Rachelle Anderson and Sophie Giroux in this file photo from July 12, 2017. Darren Taylor/SooToday

The business community's concerns about frequency and visibility of downtown police patrols turned into exasperation this week after Mane Street Cafe and Lounge reported much of its patio furniture was stolen early Wednesday.

As the theft was discussed at a Downtown Association meeting later that day, there was even talk about business owners taking matters into their own hands to protect their establishments.

"Honestly, I'm at the point where I'll be a vigilante myself if I have to," said Mane Street owner Krista Nolan.

"I'm going to be honest with you about that. If I see these guys in action, I will take action," Nolan told Downtown Association directors.

Mane Street was one of the first Queen Street establishments to invest in a storefront patio after city officials decided three years ago to allow them.

Nolan said this week's theft of half her lounge furniture and many decorative plants was just one of many incidents she's had to deal with over the past few months.

Street people moved in with the pandemic

"It certainly heightened after the [COVID-19] shutdown in March," she said.

"The street people moved right in. I've seen more buggies with bags in them than I've ever seen before. I've seen vestibules that are still empty.... Case's Music made it known that they were camping out and having fires behind the piano there."

"This [Wednesday] morning, some patio furniture went missing along with many plants. I've learned not to put too many pretty things out because they all have to get torn down," Nolan said.

'Multiple people drove by, but never one cop'

"I understand the reasoning for restraint in having to tear down an entire patio every single day. I feel for them."

"I had two guys sitting on my patio from 1:30 in the morning until 3 when the patio furniture went missing."

"They're on the patio. Multiple people drove by but never one cop. They made it very clear that there's no coverage. They're not patrolling because they're apparently short-staffed and they're attending calls all day."

"I was under the impression that they were patrolling but they're not."

"I figured that if at one point they came by after the bar closed at 2 o'clock that they would have probably scampered off."

"There should be at least a couple of patrol cars assigned to the downtown core at some point in the middle of the night."

'The courts are the problem'

Wednesday's theft was recorded on surveillance video and Nolan said she was told by police that the suspect was known to them and had been just released from jail.

"According to the police officer that I spoke with, the courts aren't doing anything about it. They're pressing charges. It's the same people that are getting thrown in jail. They go to court and they throw it out. So the courts are the problem."

Nolan said that last month, a man overdosed on her patio.

"Actually he died beside my patio but went into cardiac arrest on my patio."

She believes downtown methadone clinics are part of the problem.

"This is another problem that I have, if there's some how, some way that we can ensure that we don't get any more clinics because it's contributing to the fact that they are moving to the downtown core. If they're going to set up a clinic, I believe they should go to the heart of some of these places like Jamestown."

"Instead, they're just bringing everyone downtown to the point where they're actually hanging out overnight waiting for these places to open."

Later Wednesday, Nolan said a man who frequents the area was screaming at her patio customers from the walkaround that directs pedestrians around her patio.

This week's news comes on the heels of reports from Richard Kim, owner of the nearby Studio Dance Arts, that persons using substances have taken over the roof of his Queen Street building.

Kim said last month that he's discovered a lot of drug paraphernalia – even blow-up dolls – in the alleyway behind his business.

But no one representing police showed up at the August or September meetings.

"I haven't heard from the police service since our initial conversation,' said association staffer Ashlyn McMillan.

"I sent emails to Lincoln [Loutit, manager of corporate communications, planning and research at Sault Ste. Marie Police Service] and the chief and I didn't get a response. They are clearly very busy," McMillan said.

Loutit tells SooToday that police are happy to partner with the Downtown Association, but he says a partnership has to work both ways.

Police have so far not been advised of dates and times of any meetings, he said.

He adds that many other parts of the city require police attention, and the association's coverage area – six blocks of Queen Street between Pim and Dennis – is far from being the only component of the city's core, which also includes Gore and Bay streets, the boardwalk and Whitefish Island.

"It's completely insufficient that an entire evening would go by without patrols," argues Downtown Association chair Kristi Cistaro.

"We will continue to follow up with police services to see what we can do to increase those patrols and get that police service member back engaged with this board and attending these meetings on a regular basis."

Jump station at the mall

Board member Angela Romano suggested an owner of a vacant storefront might be willing to provide space for police to work in.

Romano is a regular fixture in the city's commercial core, walking the full length of the downtown daily.

"I've seen the bike patrols in early August. There was one day I saw two different officers go by within an hour of each other. I had that happen maybe two or three times. Other than that, I haven't seen a lot of increased patrols."

'I don't know where they are, but I can tell you they're not visible'

"I'm on my cameras constantly. I've seen a constable on a bike once. I don't know where they are, but I can tell you that they're not visible. Cops in general are not visible. There's no patrolling."

Two community mobilization officers are expected to be permanently assigned to the Station Mall satellite station by the end of September, she said

"There are bike patrols, foot patrols happening from my understanding," the councillor said.

"We can't have police services continuing to do the same stuff," said Paul Scornaienchi, the Downtown Association's vice chair.

"This cycle has to stop. Something different has to happen."

"A lot of the substance abusers are taking a look at where they're comfortable doing things. I was shocked to hear that they're comfortable being in your patio space from one o'clock in the morning. We can't have police services continuing to do the same stuff," Scornaienchi told Nolan.

"Be collaborative and express to police services every small, little thing that we see, because it's those stats that will get us through this," Scornaienchi advised.

Like Nolan, Scornaienchi was talking this week about the possibility of downtown merchants taking security into their own hands.

"It's not unstriking, I don't think, for our membership to put together a security committee and have part of our membership patrol the police, with certain qualifications and maybe do's and don'ts. I don't know how dangerous that is."

"Having membership patrols, I think you're getting into a lot of liability and I'd be really concerned about someone potentially coming on to a situation where they weren't equipped to deal with it," she said.

"Also, if you have membership, they're more emotionally charged about their business, their street. I think that could definitely cause some problems in terms of how they would react. I would be worried about safety."

Downtown Association directors talked about the possibility of bringing back the Crime Stoppers patrols, which used volunteers, many of them students enrolled in college law and security programs.

That might be difficult given the current pandemic restrictions, they were told.

"Maybe they'd be willing to offer some patrols on certain nights of the week in exchange for some social media promotion from the Downtown Association," Romano said.

The association will now write to Police Chief Stevenson and Deputy Chief Robert MacLachlan, asking once again that police send someone to their monthly board meetings.

"Resources are stretched thin all over the place but that doesn't mean we can ignore the problem," said board chair Cistaro.