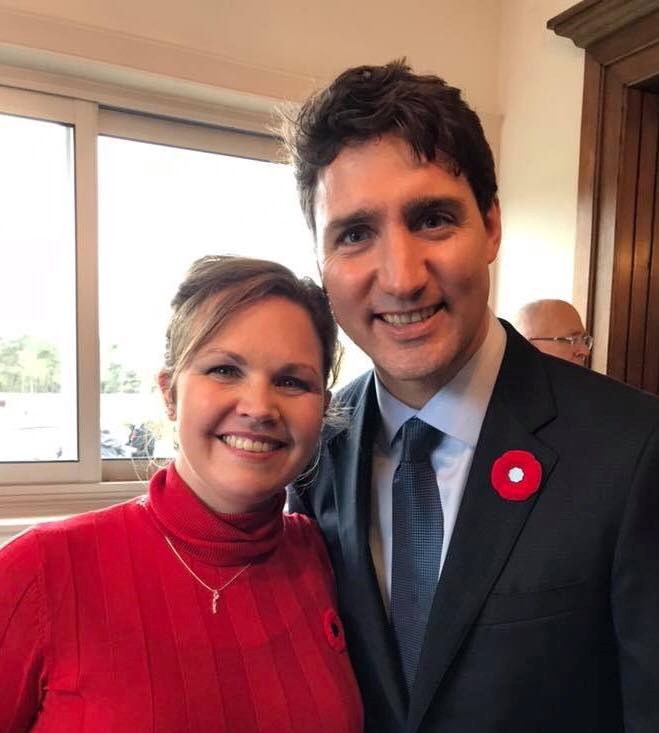 A Thessalon-area native was on the world stage Saturday morning.

There, she met Prime Minister Justin Trudeau and other federal government dignitaries, one day before Trudeau attends a Remembrance Day ceremony in Paris.

Brooks is a music and choir teacher at Ecole Jeanine Manuel in Lille, France, where she lives and works with her husband Jean-Charles Collard, a primary school teacher, and her two young children.

Brooks has lived and worked in France since 2009.

“A colleague and friend of mine asked me to sing ‘O Canada’ and the French national anthem at the Vimy cemetery, and then about three days ago she said ‘there’s been a change in plans.’”

Brooks learned the ceremony would be moved to the Canadian National Vimy Memorial, with the prime minister in attendance.

“I was thrilled. What an honour,” Brooks told SooToday in  a telephone interview from France Saturday.

“It was a beautiful ceremony.”

The ceremony was limited to approximately 50 people, Brooks said.

“In the First World War, a lot of the area where we now live was hit hard. As you drive up to the monument at Vimy, you see this massive white monument high up on the hill. It moves you to tears. It’s such a wonderful homage to the Canadian soldiers who died there. It’s this peaceful, white, yet sombre monument. Singing at the foot of it was very impressive,” Brooks said.

The singer met Prime Minister Trudeau at a reception after the ceremony.

“He came around and chatted with me about my singing and told me ‘good job.’ We compared notes as parents who have young children,” Brooks chuckled.

Brooks received voice and music training in Sault Ste. Marie from Agnes McCarthy and Paul Dingle before earning an undergraduate degree in vocal performance and her Bachelor of Education degree at the University of Western Ontario.

“My parents (Merv and Kim Brooks) were amazing. Twice a week they would drive me to the Sault for voice training,” Brooks said, adding she usually returns to Canada to visit her family once a year.