The greatest under-18 chess players in Canada and chess grandmasters of all ages from around the world are in Sault Ste. Marie this week.

The youth tournament finished up Monday and the winners are going on to represent Canada in the world championships in what organizers agree could be called the ‘Olympic-level’ of under-18 chess.

Around 265 youth from across the country showed up for that tournament — which ended Monday — and 135 players from 19 countries showed up for the open which will continue on until Sunday.

This is the first time either of these events are being held in the Sault, a pretty out of the way location for something this big.

Players at the top levels are usually focused on increasing their chess rating and they do that most efficiently by beating those who already have high ratings.

The way he describes it, it’s sort of like the paradox of trying to get cool kids at your party who only want to go there if it's already cool — but replace 'cool kids' with ‘grandmasters’.

Organizers can try and boost the liklihood of a prestigous turnout by sponsoring grandmasters with free hotels and entrance fees and by offering big cash prizes.

Peredun said thanks to two $20,000 donations from the Economic Development Corporation and the city, they were able to offer one of the biggest cash pots in Canadian history, the top prize being $6000.

The help from the city must have worked — six grandmasters showed up this year including the world’s youngest current grandmaster, all the way from India, 15-year old Aryan Chopra.

Chopra — who became a grandmaster when he was 14 — said his goal is to be the top rated chess player in the world.

The child prodigy’s entry into the world of chess is almost like a superhero origin story and begins with three injuries that involve some sort of damage to his head. 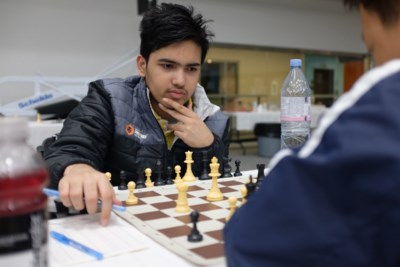 Aryan Chorpra, 15, from India is currently the world's youngest chess grandmaster. The child prodigy hopes to someday be the world champion. The faint scar on his head is from when a car hit him when he was six, an incident that led him on his chess journey. Jeff Klassen/SooToday

When he was one year old he fell down 16 concrete stairs and when he was two he fell off a balcony and his skull suffered a hairline fracture.

When Chopra was six years old he was sitting down in the driveway playing when a car reversed and, amost running him over, knocked him in the head and his mother rushed him to the hospital as blood poured out everywhere.

He still has a scar on his forehead from this incident.

While recuperating in bed, his dad gave him a chess board.

“Then my journey started,” recalled Chopra, who immediately took a liking to the game.

Soon the child was explaining things about the game to his dad, then after just learning a few rules like castling he entered a local championship in the under-7 category, and won.

Things took off from there.

“He had a knack, got results, (and) this again motivated him," said his mother Mamta Chopra.

Chopra’s mother explained that while achieving grandmaster at 14 is amazing, it’s been done before.

What makes her son's prospects seem good for eventually becoming the world champion is that he achieved that title by only playing around 50 tournaments — others usually take two or three times as many tournaments to achieve his level she said.

Chopra’s goal now is to just increase his chess rating so that he gets more invitations and sponsorships to tournaments.

Chopra said there are no shortcuts to being good at chess — he uses his natural ability but also works as hard as he can.

“To become a good chess player you need one hundred percent concentration and love for chess,” said the young prodigy.

The top player in this year’s open tournament is the 2630-rated Ukrainian grandmaster Andrey Vovk.

Vovk trained under Vladimir Grabinsky, a Ukrainian International Master that has trained 12 grandmasters in total and Vovk himself rose up with around eight of them, including his brother Yuri Vovk. 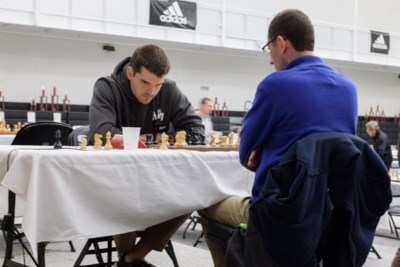 Vovk said at one time he was rated 97th in the world — he’s now 148th — and played against some of the world’s very best including Maxime Vachier-Lagrave and the world’s second highest-ranked player Vladmir Kramnik.

In recent years, Vovk has taken a more relaxed, less-competitive approach to chess and now works professionally as a full-time chess coach and trainer.

The real reason he showed up to the tournament in the Sault is because he wanted to visit friends and family that were in Canada as well as have the opportunity to see a new country.

“When you’re worried about the result you’re more nervous — I don’t like this,” he said.

Joyce Deng, 9, came from Gatineau, QC to play in the youth tournament with her brother Henry, 9.

Deng wasn’t expecting to win, said her father Gordon, but going to event like this is a fun way to get exposed to a new sort of event, city, and to meet new kids. 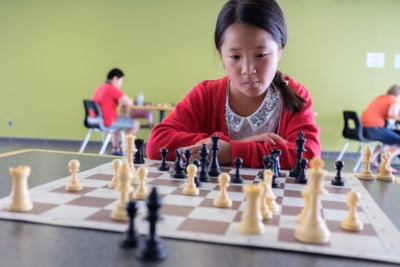 Joyce Deng, 9, from Gatineau, QC said she's into chess mostly because she finds the strategizing fun and she enjoys using her brain. She destroyed the photographer in a quick game on Monday. Jeff Klassen/SooToday

Deng’s dad said he wants her to be better at math and he’s hoping getting his kids involved in chess is a road to that.

Deng takes lessons via the internet with Windsor-based Vlad Drkulec, who also happens to be president of the Chess Federation of Canada.

Deng said she enjoys playing chess because it has “a lot of tactics” and makes you use your brain.

Deng said she wants “to try hard and have fun” with playing, but with more emphasis on the fun.

“If you lose you learn a trick and you can take that trick and use it in another game (yourself),” she said.