The most dangerous man in Iraq 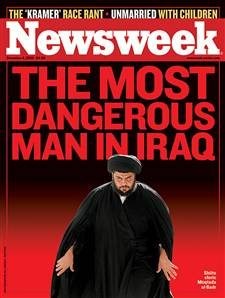 They can spot his men.

"They look like they're pulling security," First Lt. Robert Hartley, tells Newsweek in the current issue's cover story about the Shiite cleric.

Hartley plays cat-and-mouse with Mahdi Army in the Iraqi capital.

The Sadrists use children and young men as lookouts.

When GIs get out of their Humvees to patrol on foot, one of the watchers will fly a kite, or release a flock of pigeons.

Some of Sadr's people have even infiltrated top ranks of the Iraqi police.

Captain Tom Kapla says he knows who they are: "They look at you, and you can tell they want to kill you."

More than anyone, Sadr, leader of the Mahdi Army, personifies the dilemma Washington faces: If American troops leave Iraq quickly, militia leaders like Sadr will be unleashed as never before, and full-scale civil war could follow.

But the longer the American occupation lasts, the less popular America gets - and the more popular Sadr and his ilk become.

In the December 4 Newsweek cover, "The Most Dangerous Man in Iraq" (on newsstands Monday, November 27), a team of correspondents profile Sadr, examining his background and how he grew to be as popular - and dangerous - as he is today in Iraq. Newsweek reports that the story of the U.S. confrontation with Moqtada al-Sadr is, in many ways, the story of American folly in Iraq.

It's a story of ignorance and poor planning, missteps and confusion.

Key policymakers often disagreed about the importance of Sadr and about how to deal with him.

The result was half-measures and hesitation.

But the story isn't just about past failures.

It also contains lessons - and warnings - about the future. In August 2003, there was a plan to arrest Sadr, after an Iraqi judge had secretly issued a warrant for him in connection with the murder of an Iraqi exile who had helped the U.S.

"The pivotal moment was Aug. 19, 2003," Dan Senor, a senior official in the Coalition Provisional Authority at the time, tells Newsweek. "We were down to figuring out the mechanisms of ensuring that the operation was seen as Iraqi, executed on an Iraqi arrest warrant. I remember it was late afternoon and we had just received a snowflake from [U.S. Defense Secretary Donald] Rumsfeld ... with nine different questions, rehashing how we were going to do this, to make sure it was not seen as an American operation." (A "snowflake" was a Rumsfeld memo.) Suddenly word came that insurgents had detonated a massive truck bomb at the United Nations headquarters in Baghdad.

Senor recalls rushing to the scene with Hume Horan, a top U.S. diplomat and Arabist.

Horan leaned over to Senor and said, "We should take down Sadr now, when no one's looking."

But there was enough chaos to deal with already.

The U.N. bombing was "a huge distraction," says Senor, "and the Sadr operation was forgotten." In the winter of 2004, a senior adviser to Ambassador Paul Bremer, the American proconsul in Iraq, was travelling in the south, meeting with friendly clerics and community leaders. "I could see how frightened they were of [Sadr] and his Mahdi Army," recalls the aide, Larry Diamond. "I was driven past an area, a kind of compound where his black-clad army was training for the upcoming revolution to seize power and take over. It just dawned on me that these people were going to make this place an authoritarian hell of a new sort, Taliban style, and would murder a lot of our allies in the process." Diamond told Bremer the U.S. urgently needed to act against Sadr, Newsweek reports.

Bremer responded that he was waiting for a new plan from Coalition forces. "I first wanted to go after him when he had probably fewer than 200 followers," Bremer recalled in an interview with Newsweek last week. "I couldn't make it happen ... the Marines were resisting doing anything."

But in the meantime, on March 28, 2004 Bremer suspended publication of Sadr's newspaper after it ran an editorial praising the 9/11 attacks on America as a "blessing from God." The response was swift: mass demonstrations, which would lead to the first of two Sadr uprisings in 2004.

In a final meeting between Diamond and Bremer on April 1, Diamond pressed the point that the U.S. needed more troops in Iraq.

It was around 8 p.m., and Bremer's dinner was sitting on a tray uneaten.

He looked exhausted. "And he just didn't want to hear it," says Diamond. "In retrospect, I think he had gone to the well on this issue of more troops during 2003, had gotten nowhere ... and had just resigned himself to the fact that these troops just weren't going to come. I think the tragedy is that everyone just gave up." The movement may now be more important than the man, Newsweek reports.

Sadr "is faced with a common problem," says Toby Dodge of the International Institute for Strategic Studies in London. "He can't control the use of his brand name, the use of his legitimacy."

Some elder followers of Sadr's father have broken away, disillusioned with the son.

And some young toughs seem to be freelancing where they can.

If Sadr were to fall, "you'll end up with 30 different movements," says Vali Nasr, a scholar and author who has briefed the Bush administration on Iraq. "There are 30 chieftains who have a tremendous amount of local power. If you remove him, there will be a scramble for who will inherit this movement ... It's a great danger doing that. You may actually make your life much more difficult."