The Christ of Christmas: a message from Billy Graham

The following is the 2005 Christmas message of Billy Graham, who has preached to more people in live audiences than anyone in history, more than 210 million people in more than 185 countries and territories.
0
Dec 25, 2005 12:58 AM By: SooToday.com Staff 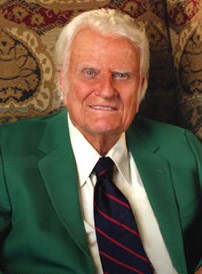 The following is the 2005 Christmas message of Billy Graham, who has preached to more people in live audiences than anyone in history, more than 210 million people in more than 185 countries and territories.

Billy Graham is regularly listed by the Gallup polling organization as one of the "ten most admired men in the world."

In December 2001, he was named an Honorary Knight Commander of the Order of the British Empire (KBE), for international contributions to civic and religious life over 60 years.

Once again the world celebrates Christmas.

People fervently pray that the Spirit of Christmas will pervade the entire world.

In many parts of the world Christmas carolers will stand outside their neighbors' doors and sing "Silent Night! Holy Night!"

Everyone is busily preparing for the holiday season. Yet, in the midst of this preparation, millions of people miss the real meaning of Christmas.

In the midst of the Christmas rush, Christ is oftentimes left out as we forget that it is His birthday we are celebrating.

The precise meaning of that first Christmas is clear: God came to earth in human form.

The impact of His birth was so great that calendars were torn up, prejudices were laid aside and people began to walk in newness of life.

Nearly 2,000 years ago the angel revealed to the wondering and trembling shepherds the glorious news that in the city of David "a Savior has been born to you; he is Christ the Lord" (Luke 2:11, NIV).

The angel had already announced to Joseph the character of Christ's Saviorhood: "You are to give him the name Jesus, because he will save his people from their sins" (Matthew 1:21, NIV).

Israel had looked for One who would deliver them from the bondage of Rome and restore the nation to an even greater glory and prosperity than was enjoyed in the days of King David.

They never dreamed that this little Babe in Bethlehem's manger was the anointed One, the King of kings and the Lord of lords.

Only a few devout people living in close communion with God, such as the aged Simeon, saw the spiritual significance of Christ's birth.

Looking into the face of the holy Babe, Simeon saw One who had come to be "a light for revelation to the Gentiles and for glory to [God's] people Israel" (Luke 2:32, NIV).

For long centuries the children of God had walked in the light of the law and the prophets, but all the while they had looked up to heaven and longed to have God step down.

He became bone of our bone and flesh of our flesh and "made his dwelling among us" (John 1:14, NIV).

The Christmas message is this: "God was reconciling the world to himself in Christ" (2 Corinthians 5:19, NIV).

But because people were blind to their sins, they saw no beauty in Christ that they should desire Him.

They crucified the Christ who yearned to save them from their sins and from the tragic consequences that inevitably followed their rejection of God's anointed One.

The world's primary need today is the Savior, salvation from sin.

Failure to recognize this fact and receive God's remedy for sin is the reason why mankind has failed to prevent recurring wars and revolutions in the world.

Because within the hearts of people is lust for position, power and possessions, the best schemes and endeavors of people will come to naught.

Until these things are rooted out, the world in a moral and a spiritual sense will go backward rather than forward.

Many have preached about the Sermon on the Mount as though that in itself is a sufficient dynamic to bring in a new world order of peace and goodwill among men.

All the religions of the world say, "Do good; do good," but they do not give us the power to do good.

One of the failures of many church leaders is their refusal to believe that our deepest problem is sin.

We have joined hands with the idealists of the world in trying to bring about social reform without first dealing with the root of the problem, which is sin.

Many people have failed to see that the human will is sin-bound, egotistic and in rebellion against the will of God.

We think that in some particular "ism" we hold the secret to universal peace and prosperity.

All religions and ideologies outside God's revelation in the Bible have this in common: They are disguised forms of self-redemption and Christ rejection.

It is beyond us to put away the sin in our own hearts.

We cannot save ourselves, let alone the whole world.

Sin permeates all that we think, feel and do; like a shadow, sin pursues us wherever we go.

It is part and parcel of our being; we cannot eradicate it.

The evils that curse the world are the consequences of hearts deceived by the devil and separated from God.

Thousands of human schemes for social and political improvement will ultimately fail because they do not deal with a person's basic disease.

They change the circumstances but leave the person untouched.

They alter the surroundings but have no power to transform the character.

If humanity is to be saved, if the world is to be transformed, then salvation must come from a source outside ourselves.

Christmas emphasizes the glorious truth that salvation is provided apart from us, that into this sin-cursed world came One whose supreme mission is to save sinners.

We cannot save ourselves because we cannot deliver ourselves from the guilt, the power and the consequences of sin.

Those in rebellion against God have no terms of peace to offer that are acceptable to God.

Only God Himself can make peace, and this He has done through the atoning sacrifice of His Son, Jesus Christ.

Through the merits of Christ's life and death we are offered full and free forgiveness.

Christmas tells us what it cost God to save the world: "For God so loved the world that he gave his one and only Son" (John 3:16, NIV).

Christ is God's great Christmas Gift to the world: "Thanks be to God for his indescribable gift!" (2 Corinthians 9:15, NIV).

Christ does for us what no other has been able to do: He removes our guilt and reconciles us to God.

He raises us from the death of sin to the life of righteousness.

He reconciles us to life and to our fellow humans.

He implants within us new hopes, new aims, new enthusiasms.

He regenerates our affections, our desires and our energies, and He strengthens our wills.

Beautiful, ethical precepts cannot save us, but Christ can.

When Christ comes into a life, He revolutionizes it so that the person becomes a "new creation." This, and this alone, is our hope.