Still time to save our CBC. Maybe 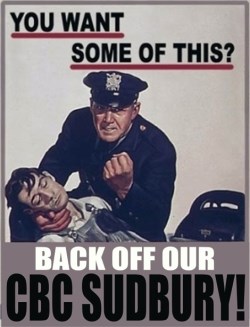 SAVE OUR CBC NORTH

SAULT STE. MARIE - Save our CBC North petitions in Sault Ste. Marie have passed the 1,000 mark since www.saveourcbcnorth.com went live May 9.

Organizers of the campaign were told today by City Councillor Lou Turco, that he's been informed CBC staff will receive pink slips on Wednesday.

Turco helped word a March 27 resolution passed by the Federation of Northern Municipalities that recognized the importance of Northern Ontario media to its regional audience.

"It's about local coverage," said Turco. "CBC North allows us to connect as Northern Ontario communities."

CBC Radio-Canada is cutting 800 jobs across Canada, but Northeastern Ontario is being disproportionately hit.

The Sudbury station will likely lose almost half of its staff, including a number of journalists.

Supporters cringe at what this will mean for regular coverage of news and stories that shape us as a northern entity.

Now is the time for local CBC lovers to support a plea to CBC decision-makers to retract cuts at their Sudbury Station and to rebuild the regional network.

Local petitions will be collected up to and including May 31.

They will then be placed in the hands of key decision-makers at the crown corporation, along with a strong recommendation for increased commitment.

Many northern communities, including Sudbury, North Bay and Timmins, have been running similar grassroots campaigns.

Petitions can be found at Algoma's Water Tower Inn at 360 Great Northern Road, or online at www.saveourcbcnorth.com.