Statements on the death of Corporal Anthony Boneca 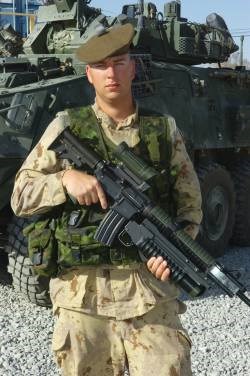 OFFICE OF THE PRIME MINISTER

"On behalf of the Government of Canada, it is with deep sadness that I send my sincere condolences to the family, friends, and comrades of Corporal Anthony Joseph Boneca who was killed this morning in Afghanistan during a combined Afghan National Army and Coalition security operation.

"Our prayers are with the loved ones of Corporal Boneca in these difficult times and we stand proudly as a nation knowing that his sacrifice was not in vain; that he laid down his life for the safety of citizens in both Canada and Afghanistan.

"On behalf of Canadians, I praise Corporal Boneca's courage and self-sacrifice and I take comfort knowing that his memory will live on in the spirit of fellow CF soldiers serving around the world, and in the hearts of his countrymen who pray for their safe return.

"As this tragic moment has illustrated, there are risks to our mission in Afghanistan and I want to thank the men and women still serving there for their unwavering commitment to their mission in spite of these risks. As a country we stand proudly behind you."

Corporal Boneca succumbed to his injuries in Afghanistan.

I encourage my fellow citizens to pause and reflect on this tragic loss for our Canadian Forces. Corporal Boneca's death serves as a further reminder of the dangers faced by our Canadian Forces every day in Afghanistan and also of the steadfastness of our members who each day try to make that country a better place to live.

Today, we honour his memory as a hero who fought for what he believed in.

On behalf of all Canadians, our thoughts and condolences are with Corporal Boneca's family and friends, as well as his extended military family during this difficult time.

"It is with deepest sorrow that I learned of the death of Corporal Anthony Joseph Boneca, who was killed during operations this morning in Afghanistan at approximately 8:30 a.m. local time. Corporal Boneca was a member of the Lake Superior Scottish Regiment, based in Thunder Bay, Ontario.

My sincere condolences go out to the family and friends of this brave soldier, who died in the name of democracy, protecting the freedoms we cherish so strongly as Canadians.

Canada will mourn the loss of Corporal Boneca but he will not be forgotten. His memory will live on through the people whose lives he has touched, while fulfilling our mission to bring peace and security to Afghanistan.

There are risks involved in this operation, but our members are among the best trained, and most experienced soldiers in the world. They are fully prepared for the mission in Afghanistan.

Corporal Boneca's courage in the face of danger demonstrates the tenacity and strength of all our CF members and it is with pride that I say he represents the best of Canada - an inspiration to his countrymen.

I stand in honour of his sacrifice and my thoughts and prayers are with him."