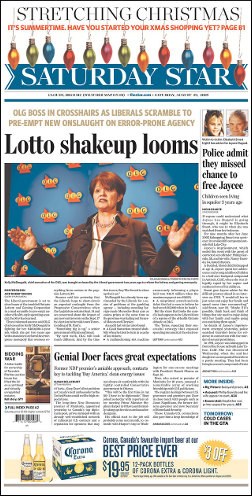 None of these relate to expenses incurred by OLG's board of directors or by me as the chair.

On August 27, 2009, I offered my resignation to the Honourable Dwight Duncan, Minister of Finance.

My resignation was not requested.

It was offered by me because as chair of OLG I am ultimately responsible and accountable within OLG for the actions of the corporation.

The minister has accepted my resignation effective today, August 31, 2009.

I assumed the position of chair of the board of OLG in June 2006.

This coincided with a turbulent time in the corporation's history as the details of inadequate policies and practices within our lottery prize structure came to the attention of the public and Ontario's Ombudsman.

Over the past three years, I and my fellow board members have worked tirelessly to effect cultural change within OLG based on the fundamental principle of integrity and the high values that the people of Ontario expect from a Crown agency.

We have made significant progress and OLG of today is vastly improved.

However, clearly some of the expenses of management executives released today were wholly unacceptable for a public agency and are a clear indication that the cultural transformation is not complete.

I have also concluded that the next phase of the transformation can be best led by a new chair.

Over the coming weeks, I have offered to assist the minister to effect an orderly transition to a new chair and the necessary recruitment of new board members.

Over the two-year period in which these expenses were incurred, a number of different policies and individuals guided and approved these expenses.

After a detailed review of these expenses, immediate action has been taken to mitigate the areas of exposure and to ensure proper oversight and accountability internally.

A new corporate policy for business and travel which includes changes to our expense guidelines for all employees has been implemented.

With annual revenues of almost $6.5 billion, OLG generates more than $1.7 billion in profit each year to help fund hospitals, infrastructure and other priorities across Ontario.

At the same time, we are ultimately responsible to the government and people of Ontario.

As a public agency OLG is rightly expected to adhere to the highest standard of accountability regarding expenses.

There have been many significant achievements by OLG that are a direct result of the hard work and dedication of the board and management.

I believe that the people of Ontario recognize this.

It has been my honour to lead the OLG board during this period of transition and I have confidence in the future of OLG under new leadership to continue to move this organization forward.

Top OLG leadership out amid another scandal