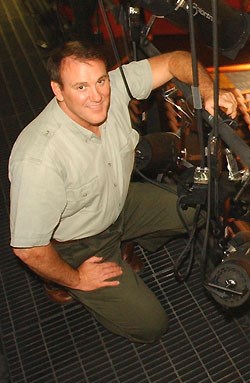 SAULT STE. MARIE, Mich. – With its new arts center being prepared for a grand opening on September 24, Lake Superior State University has hired a facility manager who lists work with Branson, Missouri's Grand Palace and Mackinaw City's Center Stage theaters on his list of experiences.

David Edmondson, a Missouri native, started work as the arts center’s facility manager and technical director on August 1 and has been busy getting the center in shape to bring in the public for the first time since the community received a sneak peak of the center's auditorium during a Detroit Symphony Orchestra appearance in summer 2004.

Edmondson has more than 14 years of experience working in theater and is no stranger to LSSU, having worked in the arts center during the DSO appearance as lighting designer and director.

Before coming to Sault Ste. Marie, Edmondson worked for several years with the Branson, Missouri's Grand Palace Theater in a variety of capacities, including stage manager, flyman, rigger, lighting and laser technician, properties master and stagehand.

The theater, the largest in Branson and host to a number of internationally known artists, is the location of the first Radio City Music Hall Christmas Extravaganza staged outside of New York City. "Coming to LSSU provides me with an opportunity to work in a theater that is starting from the ground up," Edmondson said. "I think I have a lot to share and this is a great place for me to be able to share it. I've worked in a lot of shows in a lot of different places that all had their own challenges."

"The venue is terrific," he said. "It's a very comfortable house. All of that warm wood, acoustical treatments, orchestra shell and other such architectural reinforcement makes it a wonderful place to record."

Through the 1990s, Edmondson worked in the production of shows for artists such as Kenny Rogers, Glen Campbell, Barbara and Louise Mandrel and Piano Man "Dino."

He also worked as properties master and laser light designer for the world premier of "Patsy," a show about country star Patsy Cline.

Edmondson has been called to the stage many times to help set and run performances for stars such as Amy Grant, Vince Gill, George Jones, The Oak Ridge Boys, Diamond Rio, Collective Soul, Jars of Clay, Bill Cosby, Reba and Styx.

"I was part of staging those performances much like I am doing for the events here at the arts center," he said.

Edmondson was a regular part of the Radio City Music Hall Christmas Spectacular, featuring The Rockettes touring unit, which ran for 10 years in Branson.

He was stage manager and properties master for Silver Dollar City and Radio City Productions.

He was also involved with the theater when it played host to the live, nationally televised Miss America Pageant in 1999 and 2000.

Edmondson was hired at Center Stage Theater at Mackinaw Crossings in Mackinaw City, Mich. in 2000.

Under his technical direction and general management, the 850-seat theater soon became known for popular shows during the summer tourist season, including "Lost in the Fifties" and "L'Harmonie," both of which ran for two seasons.

During his tenure in Mackinaw City, Edmondson worked on creating, developing and assisting with the producing of the Northern Nights Laser Show, an outdoor nighttime attraction designed to draw and entertain tourists, visitors and shoppers at the Mackinaw Crossings complex.

In 1994, Edmondson was trained by Star Lasers Inc. of Hollywood to install, repair, maintain, design and program lasers and has since worked on many laser shows, including "The City of Los Angeles Millenium Celebration." He continues to serve as a freelance operator for Star Lasers and has visions of bringing laser light shows to LSSU's arts center, maybe as early as this December. "There's nothing like a good indoor laser light show," he said.

Edmondson said he hopes to make the Christmas and New Year's holidays a memorable season at the arts center and would like to create something as spectacular as the shows he worked on in Branson.

"We have everything here to do it…the talent pool, the tools ... We can provide something that will become as much of a tradition as getting a Christmas tree is for the people of Sault Ste. Marie and surrounding communities."

Since his arrival, Edmondson has been busy settling into the center and preparing it for the grand opening at 11 a.m. on September 24.

The public is encouraged to attend the ceremony, as well as the events surrounding the weekend, including the Butch Thompson Trio at 8 p.m. on September 23 and The Second City at 7:30 p.m. September 25-26.

The schedule is busy, but Edmondson takes it all in stride. "I enjoy it. I've had a lot of fund over the years doing this, and theater is supposed to be fun," he said. "I hope to be able to carry that over to the students."

Edmondson said he is especially looking forward to "seeing the smiles from everyone and having them rave about this place."

For more information about the LSSU arts center and the productions scheduled for the fall semester, visit www.lssu.edu/artscenter.

Tickets are available online and at the Norris Center and arts center box offices.