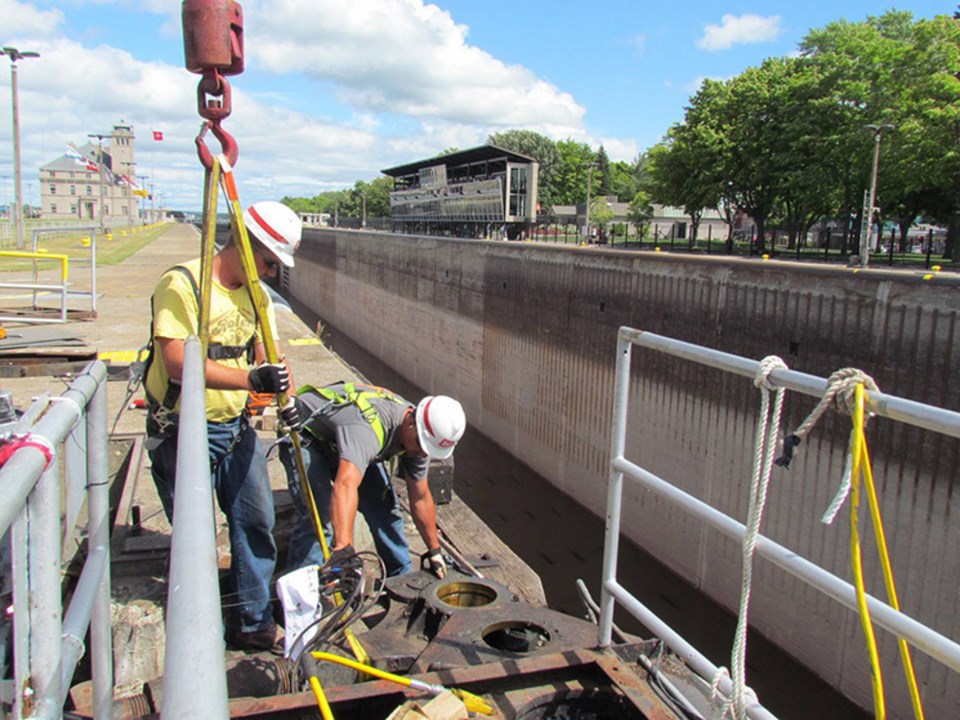 File photo of work being done on Soo Locks in 2015, courtesy U.S. Army Corps of Engineers

It's no secret the Soo Locks are crucial to our area, but a new U.S. Department of Homeland Security report shows an unplanned, emergency six-month shutdown of the 48-year-old Poe Lock in Sault Ste. Marie, Michigan, if it happened, would be an economic disaster.

The report, referred to in a Friday story in the Detroit Free Press, said such a shutdown would close factories and mines, grind auto and appliance production in the U.S. to a halt for most of a year and lead to the loss of 11 million jobs across America.

Homeland Security wrote a shutdown would also have serious effects on the Canadian and Mexican economies, calling the Poe Lock “the Achilles’ heel of the North American industrial economy.”

Sault, Ontario industrial and political figures were not immediately available for comment.

The report was obtained by the Detroit paper through the Freedom of Information Act.

The Poe Lock is the only one of the Soo Locks able to accommodate the impressive 1,000-foot-long ships that transport millions of tons of iron ore from mines in Minnesota and northern Michigan to steel mills along the Great Lakes.

While such a closure may not be imminent, the 1,200-foot long Poe Lock and the smaller MacArthur Lock (built in 1943) have faced repairs and delays over the years, which have led politicians and the manufacturing sector to renew the call for a new lock to be built.

The need for a new lock has been acknowledged and discussed by U.S. politicians for years.

An announcement for a new lock was made in 2009 at a ceremony at the Soo Locks attended by federal, state and local political leaders amid a great deal of hoopla, but very little has been done.

Yet another U.S. government study (costing $1.35 million) to look into the building a new lock was announced in 2015.

The study alone will take two years to complete.

The six-month outage scenario, the Homeland Security report states, could stem from a gate failure at the Poe Lock.

Such a closure during the March to January shipping season would affect 75 percent of the U.S. steel output, Homeland Security states.

Even once the Poe Lock reopened after needed repairs, Homeland Security estimates it would take several months for mines and mills to get back up to full capacity.

In the meantime, unemployment would rise by six percent across the U.S., and by more than 20 percent in Michigan and Indiana.

The department's report, according to the Detroit Free Press article, also points out "there are no plans or solutions that could mitigate the damage from such an outage."

The report acknowledges past studies have suggested moving iron ore by truck or rail in the event of an economically disastrous Poe Lock shutdown.

However, both truck and rail transport are no match for moving iron ore by freighters through the Poe Lock.

The report estimates it would take seven trains with 100 rail cars each or about 3,000 trucks to carry the amount of iron ore a single 1,000-foot freighter could carry through the Locks.

The report also states another option, such as loading steel on to smaller ships or on to rail cars to Escanaba on Lake Michigan, to be shipped out from a port there, would be problematical.

There is doubt if necessary infrastructure could be put in place quickly enough at Escanaba in the event of an emergency at the Poe Lock, and questions would arise over which mills get priority when it came to shipping out the iron ore from that port.