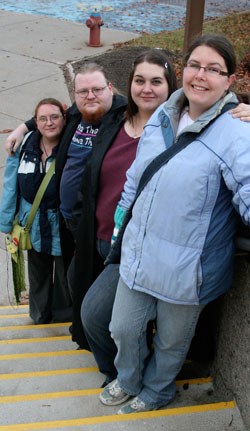 "We're here to show our support for those in the United States who are fighting to get same-sex marriage recognized and for human rights across the board," Rowe told SooToday.com.

Although the Sault's protest drew small numbers, the event was spearheaded by Join the Impact, an equal-rights organization with more than one million supporters world-wide.

Three hundred cities across the United States, as well as communities in ten other countries, simultaneously hosted protests against Proposition 8 and in support of equality.

"The battle may have been fought and won in Canada to allow people to marry whoever they want, but being respected just as another human being is still a problem," said Rowe. "There's still a long way to go in some cases."

As a chaplain with All Seasons Weddings, Zuke has been officiating same-sex marriages for the last four years.

Many of her clients come from the United States.

"It means so much to them to be married, that they often come without witnesses," Zuke said. "They ask me to provide people to sign the paperwork for them because they're so committed to getting married. They'll cross a border without any support just to get that little piece of paper that we take for granted."

On January 10, 2009, International Human Rights Day, Join the Impact will organize another international protest, this time against Defense of Marriage Acts (DOMA) which only allow for marriages between men and women.

Under this legislation, some states will not recognise marriages between men and women if the union took place in another state that allows same-sex marriage.

For more information about Join the Impact, please click here.