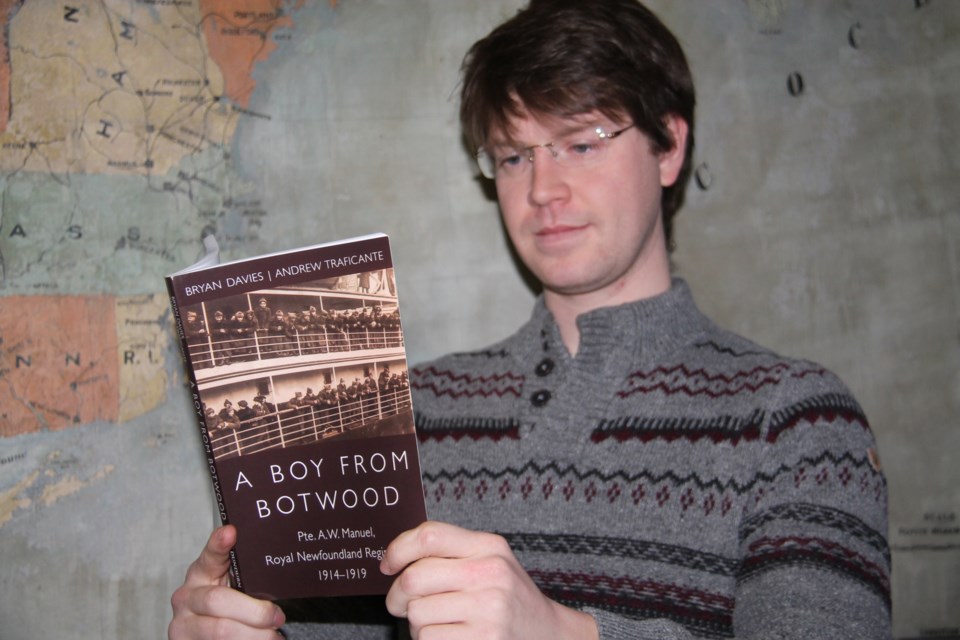 The Sault's Andrew Traficante has co-authored his first book, based upon a valuable historical find. Darren Taylor/SooToday

A Boy from Botwood, by Traficante and Bryan Davies, draws from the 1914-1918 experiences of Private A.W. (Arthur) Manuel of the Royal Newfoundland Regiment.

The book is already being hailed as one of the most detailed records of a Canadian prisoner of war’s experiences.

But along with the heaviness, there is wit and wisdom in its pages.

“I think after reading Arthur’s manuscript, it became really apparent he had a story he really wanted to tell,” Traficante told SooToday.

“He might not have understood how significant the story was, but I was so excited reading it.  It really is an exciting read, and opens up a totally new perspective on war I didn’t even know about.”

There he stayed until the outbreak of the First World War in 1914, when he joined the Royal Newfoundland Regiment and went overseas.

Trained as a sniper, he didn’t like the deadly job.

“He didn’t have the stomach for killing people…I think from the book it’s pretty clear he did his duty, but he feels really bad about it, so he got out of that as soon as he could and became a signaller (responsible for sending military messages),” Traficante said.

Manuel steadfastly refused to discuss his war experiences until, at 83, he decided he would write down his memories and reflections on the brutality and futility of war.

Manuel hired a stenographer, purchased a dictaphone and compiled 400 pages of manuscript.

“Arthur decided he was going to write his story.  From reading the manuscript, it’s apparent he had been researching.  He loved to read and he only had a Grade 8 education, but he was a self-taught scholar, and he had been compiling his research on the First World War since the time he was fighting in it,” Traficante said.

While on leave in London, Manuel also researched politicians, listening to Prime Minister David Lloyd George speak in the British House of Commons.

Manuel thought common soldiers on both sides were victims of mistakes made by generals, mere pawns in an imperial world.

“After the war, he hits the library, he’s very interested in the war and mentions Karl Marx quite a few times in the manuscript,” Traficante said.

Arthur’s unpublished memoir was discovered by grandson David Manuel among the family’s records in 2011.

The grandson met co-author Bryan Davies, a retired Crown Attorney, history enthusiast and friend of Traficante’s family, at a pub in Whitby, Ontario and mentioned the discovery to Davies.

“He turned the memoir over to us and said ‘why don’t you take a read, see if you think it’s interesting?’” Traficante said.

“It wasn’t organized, there weren’t any chapters…(but) what was apparent is that it was an incredible story, that he had fought in the three major battles the Newfoundland Regiment had taken part in.”

“We got back to David and we said ‘this is a really interesting memoir, it should be published.’”

Traficante and Davies took a year and a half to work the 400 pages of text into a 157-page book.

The two men did some of the work in a boardroom at the Algoma Conservatory of Music.

“We’re the authors of the book, but it is Arthur’s memoir, so I would say we edited and compiled his work, writing all the chapter introductions and the forward to the book,” Traficante said.

“I don’t think it was ever his intention to publish his memoir, but we’ve gone through his reminiscences and worked it into that…we’ve taken them and put them into chronological order.”

An historical labour of love for the two authors, Traficante said “it was like putting a jigsaw puzzle together, but we also had to be really careful we stayed true to what he was saying.”

“His message in this book is that war is futile.”

Captured at Passchendaele, Manuel spent the latter part of the war in a German POW camp.

“It was an undocumented camp, it wasn’t on the books, it was a slave labour camp,” Traficante said.

Manuel escaped from the camp, only to be recaptured.

“He was terribly abused,” Traficante said.

In fact, the sadistic labour camp commandant chopped off a piece of Manuel’s left foot with an axe.

The injury was Manuel’s ticket out of the brutal camp.  He was treated for his injury in an enemy hospital, then sent back to a regular POW camp in Bavaria.

“He pretty much made a full recovery in terms of walking,” Traficante said.

The war ended in 1918, the Allies officially victorious upon the signing of the Treaty of Versailles in 1919.

Manuel returned from overseas and spent only a brief time in Newfoundland before he moved to Windsor, Ontario, where he began a long career in the hotel industry.

Despite some horrific experiences, Traficante said Manuel went on to become a husband, father and grandfather, with stories to tell and glimpses of wit in his pages of manuscript.

“I think he was a fairly well-balanced person, going on to become a successful businessman.”

“I just wanted to share the story with other people, and I think Arthur would have agreed.”

Traficante, 30, born and raised in Sault Ste. Marie, is a Sir James Dunn graduate who studied at Queen’s University before earning an education degree from the University of Edinburgh.

He taught in England for several years before returning to Sault Ste. Marie and now works as an Algoma District School Board (ADSB) high school teacher.

A Boy from Botwood goes on sale Jan. 21 in Canada, Feb. 14 in the U.S., and will be available at local bookstores or through Amazon.

Admission is free.  Copies of the book will be available at the door for $20.  Reserved seating is available by emailing the Conservatory at algomaconservatory@algomau.ca or by phone at 705 253 4373, extension 6400. Those attending are asked to indicate their preference for the 2 p.m. or 7 p.m. seating.