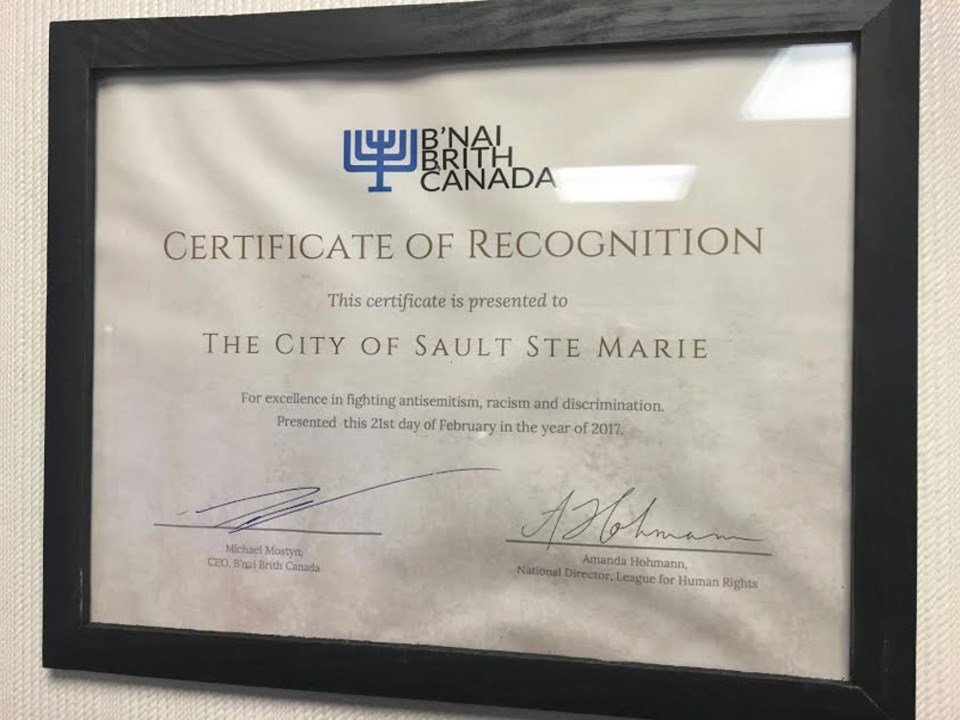 B'nai Brith presented the city of Sault Ste. Marie with this certificate of recognition for its support of the local Jewish community to Mayor Christian Provenzano's office, Feb. 21, 2017. Darren Taylor/SooToday

The city of Sault Ste. Marie has won recognition for its response to a recent incident involving a racist attack.

Sara McCleary, a local writer who contributes to a Jewish online publication, found a swastika and an offensive word scrawled into a snowbank outside her home in January.

City Police were called in to investigate, but no one, to date, has been apprehended regarding the incident.

Regardless, public support for McCleary and the local Jewish community has been strong.

“We gave a certificate of recognition to the city for the response the city showed…the outpouring of support from the city was just fantastic, and we really wanted to recognize that,” Hohmann told SooToday.

Hohmann was in her hometown, having visited and enjoyed Passport to Unity Monday.

“We do human rights work right across the sector, not just the Jewish community, but in this case the Jewish community in the Sault felt particularly targeted with swastikas, so we really wanted to make it clear the larger Jewish Canadian community appreciated the outpouring of support as well.”

“The certificate of recognition we gave to the city is not something we do often…it’s a very rare honour, and it’s something the Sault should be really proud of.”

Hohmann said she and Provenzano had a good discussion and that she appreciated learning of the refugees the Sault has recently taken in.

The certificate is on display in Provenzano’s office.

“Unfortunately, I get calls about incidents like this all the time but to get a call about my hometown, it was particularly difficult for me, but the outpouring of support the community showed was fantastic, I have to say the Sault has really stood head and shoulders above most of Canada when it comes to the reaction we saw to that particular incident,” Hohmann said.