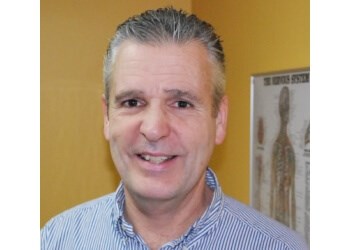 Myers died Saturday after a battle with cancer.

“In his practice, he was more than just a clinician. He was a brilliant mind and a brilliant clinician and people came to him for their physical ailments but in addition to that he was so much more to the patients. He became a mentor to a lot of them, a good friend to many of them, he was a shoulder to cry on, a life coach,” said his son, Dr. Chris Myers, a partner in the Myers Chiropractic Clinic, speaking to SooToday Sunday.

Myers, a Sault native, practiced as a chiropractor in the Sault for over 40 years, beginning in 1978.

“As far as chiropractic in the city of Sault Ste. Marie is concerned, he’s a legend. He was one of the pioneers in the early days of the profession locally. There are countless chiropractors who are currently practicing locally who got into the profession because of him, having been patients to him or worked in his office over the years,” Chris said.

“It was an inspiration growing up with him being a chiropractor, and how he was able to fix my own sports injuries, and working in his office in high school and university, I saw the positive effect he had on people’s lives, physically and mentally. He was so well loved. That motivated me to do the same thing and carry on his legacy.”

“You could see the transformation when people came into the office and when they left the office. They were always feeling better physically, but they always left the office with smiles on their faces, they felt better emotionally and spiritually. He always made them laugh. He loved to laugh and joke around,” Chris said.

In addition to raising his own family, Myers and his wife acted as foster parents to countless children over the years through the Children’s Aid Society.

“For me, he was a great friend. He was my mentor. He taught me a lot, not only about practicing chiropractic but about having a positive attitude,” said Dr. Lorne Jarrett, a fellow Sault chiropractor who, in previous years, shared a professional practice with Myers.

Myers had the ability to sense separate, potentially serious medical problems (apart from chiropractic issues) and would often order blood tests and X-rays for patients.

Myers was diagnosed with an aggressive form of prostate cancer in December 2019.

“Right from the very beginning he was very open about what the problem was, and then once he knew the extent of it, Rod realized it’s better to let people know. He was right up front. He told his patients, he told everybody,” Jarrett said.

Dedicated to staying active and positive for himself and his patients, Myers kept working while undergoing cancer treatments.

“That’s where Rod was happiest, at work,” Jarrett said.

With that same dedication to staying active, Myers encouraged Jarrett, who had retired, to return to chiropractic medicine.

“I’m (currently) semi-retired and working out of his office. About four years ago he said ‘Lorne, you should still be working…my office is yours any time,” Jarrett said.

Jarrett then went back to work at the Myers clinic on weekends to see patients on an emergency basis, as well as patients from outlying communities travelling to the Sault for chiropractic care.

He also worked with Chris Myers in taking care of the practice while Rodney Myers took some time off for cancer treatments.

“Rod and I, not only were we colleagues but we were friends. We lived on the same street for a while. Our families got together when they were very young, on weekends (the two men looking after each other's patients when one went on vacation).”

“He basically lived, breathed and ate chiropractic. You could see the enthusiasm he had for the work that he was doing.”

“In order for the chiropractic profession to be recognized and be considered respectable what you needed were chiropractic practitioners who did their jobs well, had good reputations and were strong advocates, and Rod, I would say, epitomized that,” Love said.

The contribution made by Rodney Myers to chiropractic medicine in the Sault cannot be overstated, Jarrett said.