Sault among 11 Canadian cities chosen to benefit from rural and northern immigration program
Jun 14, 2019 8:34 AM By: Darren Taylor 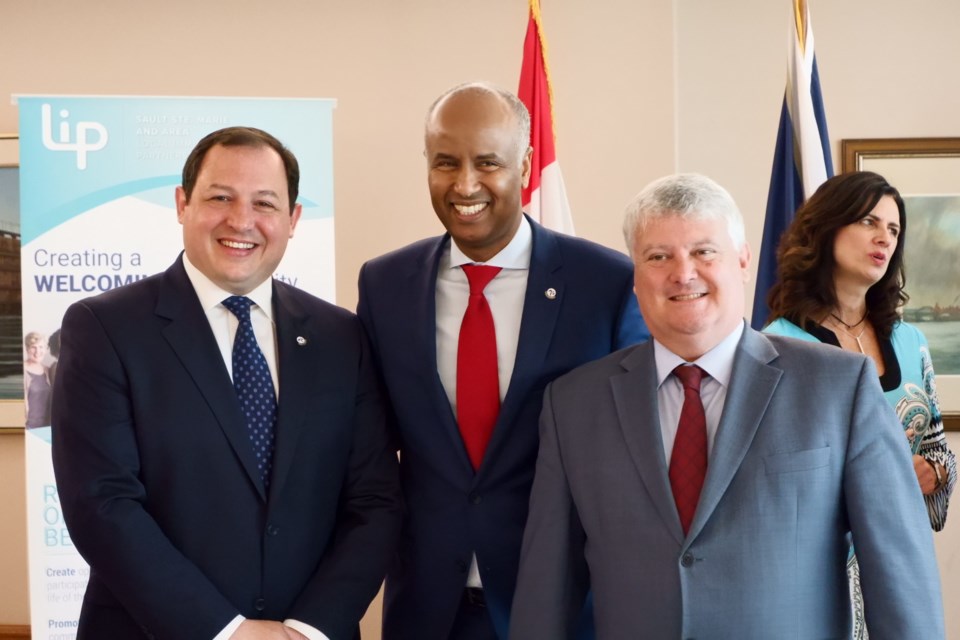 Mayor Christian Provenzano, Ahmed Hussen, Minister of Immigration, Refugees and Citizenship, and MP Terry Sheehan are pictured together at this mornings announcement that Sault Ste. Marie will be one of 11 cities to be part of a new immigration experiment. Donna Hopper/SooToday

Ahmed Hussen, Minister of Immigration, Refugees and Citizenship, has announced 11 rural and northern communities, including Sault Ste. Marie, have been selected as part of the federal government’s new Rural and Northern Immigration Pilot.

“There are hundreds of people who will be retiring from your job market and in order for the Sault to sustain and grow its tax base there will be a need for new workers, a need for an injection of labour,” Hussen said, speaking to SooToday in a telephone interview prior to the announcement.

“We were looking for rural communities that needed immigrants to fill unfilled jobs and also bring in much needed skills that are lacking, and the second criteria was that a community must also have at least a little bit of an infrastructure for welcoming immigrants, (such as) access to language training, access to housing, access to some sort of support initially, so the stronger the presence of those two criteria, the more likely we were able to select that community."

North Bay, Sudbury, Thunder Bay and Timmins are other northern communities on the list for the new program, which will begin in 2020 and last for three years, with the possibility of extending it to five.

The immigrants will come from whichever countries have those workers and skill sets the Sault needs, Hussen said, adding each community will have a great deal of control over which immigrants get the chance to live and work in their areas.

“They’ll ask ‘do these people fit into our local community economic development plan?’ and if the answer is ’yes,’ they endorse those people and the file comes to us and we process it. It’ll be led by the community, we’ll just do the fast processing.”

“If the community says we need 10 truck drivers, two computer engineers and five welders, then that’s what the community decides and we just process the applications. It’s very much geared to what each community identifies in terms of its labour market’s needs and requirements,” Hussen said.

The program is based on the Atlantic Immigration Pilot, launched in March 2017 as part of the Atlantic Growth Strategy. The four Atlantic provinces were able to nominate up to 2,500 workers in 2018 under that pilot to meet labour market needs in the region.

Immigration pilot programs usually have a ceiling of 2,750 immigrants hired nationwide each year, but Hussen said this program will include workers families as well.

“It’s a ‘first come, first served’ in terms of using the quota. I suspect Sault Ste. Marie and Sudbury will use the numbers quicker than the other parts of the country because I feel they’ve always been ahead of the others in terms of advocating for this program...my prediction is the Sault and Sudbury will be the first to use the program and end up using a good number of the allocation.”

Brandon and Gretna-Rhineland-Altona-Plum Coulee in Manitoba, Moose Jaw, Saskatchewan, Claresholm, Alberta and West Kootenay and Vernon in BC are the other communities in the group of 11 picked by the government for the pilot.

“The number of communities that applied for the pilot program, the numbers we received, were overwhelming,” Hussen said.

Hussen said he has already visited some of the communities involved in the Rural and Northern Immigration Pilot program, and would “ideally” like to visit each one.