Trying to raise the tone of a debate by giving candidates advance access to questions is no guarantee they won't go negative on opponents
Jun 6, 2018 9:01 AM By: David Helwig 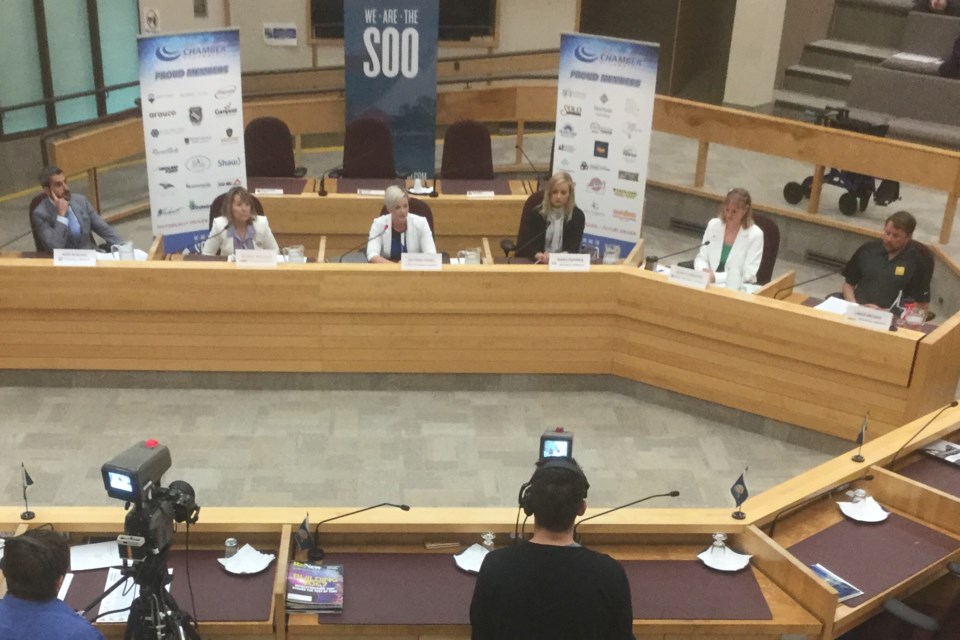 Not one question asked at last night's Chamber of Commerce public forum took any of the local provincial election candidates by surprise.

Advance copies of the questions, mostly submitted by SooToday readers, were quietly fed to candidates earlier in the day in hopes of bringing a more "intellectual" quality to the two-hour televised forum, Rory Ring, the chamber's chief executive officer, tells SooToday.

But the extra time to prepare thoughtful, civil responses didn't stop some candidates from planting low-line kicks on opponents and their party leaders.

Enough mud was thrown by Liberal, NDP and PC hopefuls to rival a bad day on Landslide Hill.

First to strike low last night was Liberal candidate Jaclynne Hamel, who used a question about her own leadership qualities and those of her party leader Kathleen Wynne to springboard into an attack on PC leader Doug Ford.

"If we're going to talk about leaders, I think it's really interesting some of the things we've seen come out about Doug Ford," Hamel said.

"Over the last 24 hours we've seen some interesting news from the [Toronto] Star. And I'm just wondering if he's willing to treat his family like that, how is he going to treat Ontarians?"

"That's the type of leadership I'm worried about. That's why I'm running, because that kind of leadership concerns me," said Hamel, deftly sidestepping the question about Premier Wynne's leadership prowess.

Hamel then similarly used a question about how she planned to raise northern Ontario's profile to pivot into a critique of the PC platform for the north: "While we have a specific platform for the north, the PC's plan is 164 words long. That's what they think of northern Ontario, that it's worth 164 words. There are four promises that I'm not sure how they're going to accomplish."

PC incumbent Romano initially didn't respond to Hamel's attacks but then threw in a jab at New Democrats when he was asked about the massive Ring of Fire chromite mining proposal and its possible ferrochrome smelter in Sault Ste. Marie.

"They have candidates who want to ban mining. They have candidates that believe in the LEAP Manifesto who want to shut down mining and forestry and manufacturing jobs in this province. How is this party ever going to get mining done in Ontario? How are they ever going to move forward the Ring of Fire with those kinds of radical beliefs?" Romano asked.

That lured the NDP's Michele McCleave-Kennedy into the cage match.

"It's interesting that you bring up radical beliefs every time we have a debate," McCleave-Kennedy responded.

Then, Liberal Hamel continued with a flurry of haymaker punches.

"What I find interesting is that Mr. Romano has mentioned Ring of Fire," Hamel said.

"Ring of Fire has to happen before that [ferrochrome] processing facility comes to this community, and what I'd like to point out is that it is missing from the platform. It is not in the plan. There is no monetary commitment. There is no plan to move forward. And furthermore, he speaks of respect, but his leader has said he will bulldoze through those communities."

"Not only that, but how is [Romano] going to deliver on that promise? If it's not in the platform, how is he able to keep his leader on track and how is he able to promise funding for that Ring of Fire when it's not even in their document?" Hamel demanded.

Romano said his number one objective since he was elected MPP has been ensuring that Noront's ferrochrome processing facility comes to Sault Ste. Marie.

"They explicitly stated to me that we were out of the running for the ferrochrome processing facility. I went [to Toronto], I resolved their concerns within one month as your representative."

"None of that would have been possible had it not been for the work I did in the first 30 days after I got elected."

Romano described hiring an Anishinaabemowin teacher and visiting each of the First Nations communities in the Ring of Fire area, meeting local leaders and deliberately staying overnight.

He said he was told: "These Liberals have been coming for 11 years and all they do is they fly in, tell us what they think we want to hear, and then they fly off."

"That is not what consultation is," Romano said. "Promising a billion dollars is not going to get these things done."

"Eleven years since the Ring of Fire was discovered, it hasn't been done yet. Nothing has been accomplished."

"What we need to do is work together with the First Nations," the PC incumbent MPP said.

But Hamel responded by pointing out that the PC platform makes no mention of reconciliation.

She went on to warn about a Conservative wish to dismantle Ontario's climate-change strategy.

"Ditching that program is going to cost us billions," Hamel said. "Not only that, but it....can potentially open up our businesses to legal action."

"The PCs are telling you that they're going to cut your gas prices by scrapping this program, but it's actually said that it'll raise gas prices significantly over the coming years," the Liberal candidate said.

"No, we do not support the carbon tax or cap-and-trade," Romano shot back.

"This is just a perfect example of how out-of-touch this Liberal government has been for the last 15 years, and where it has hurt our economy locally in Ontario."

"It's mandated by the federal government that we must have a $50 tax per ton on carbon. What the Liberals did provincially was cap and trade. So they came up with this interesting system of imaginary credits. They made up this imaginary currency and there's only a few other states that participate – Quebec and California – and we have to trade this imaginary currency with these other places, and we ship 460-plus million dollars to California and Quebec. That does not help us. That hurts us," Romano insisted.

After this, Romano trained his sights on the New Democrats.

"When you look at th NDP platform strategy, they actually want to triple that. They want you to spend $150 a ton for your carbon....We're going to spend like $1.2 billion."

"The Liberals have done so much to cause so much significant waste and mismanagement in the province, hurt our job growth. We are losing manufacturing jobs. We've lost 350,000 jobs in the last 15 years and the NDP is just more of the same," Romano said.

"With the polarization and the vitriol that's happening and the disenfranchisement and the frustration that the voters are feeling to the point where 49 per cent of them aren't even showing up, I think we need to take a step back," Flannigan said.

"The Green Party is committed to doing politics differently so that we can relax, so that we can make decisions that are going to benefit Ontario and the people in this province," she told the meeting.

Holmberg said now that the Liberals have admitted they will not form a government, there's no reason why voters shouldn't consider smaller political entities like her Northern Ontario Party. "We're not delusional, thinking we're going to come and sweep the whole thing and be the next end-all-and-be-all, but we're going to try and make a little bit of history if not a lot of history."

"We want to give individuals more rights over the property they own and make it easier to purchase and develop said property. Canadians should be allowed to do what they want on the property so long as they aren't harming others or the environment."

'I don't want Doug Ford to be my premier'

"Mr. Romano has worked very, very hard throughout this campaign to distance himself from Doug Ford," Hamel said.

"Ask yourself why that is. I've heard from you at the doors that you're concerned with that type of leadership. You're concerned about Doug Ford being at the helm of this province with a majority government and I'm there with you. I'm running because I don't want Doug Ford to be my premier. It's that simple."

Finally, McCleave-Kennedy got in some final shots against Romano and the PCs.

It was organized by the Sault Ste. Marie Chamber of Commerce, SooToday and Algoma University, broadcast live by Shaw TV and livestreamed on SooToday.

Questions were posed to candidates by Algoma U political science students.