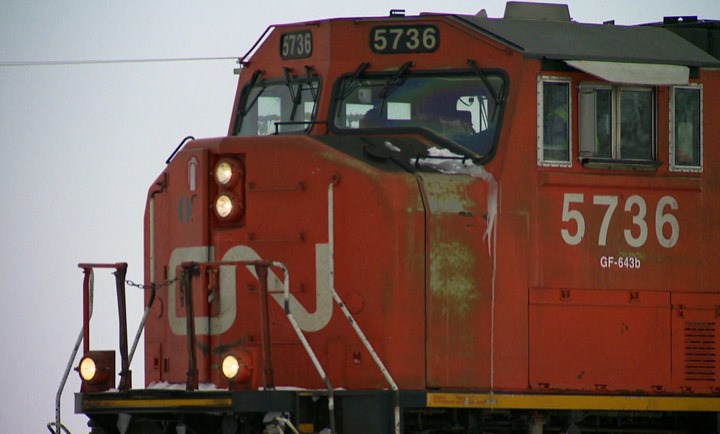 CN workers need rest in order to do their jobs safely.

That from Matt Cain, a Sault-based train conductor and, in a unionized capacity, Teamsters Canada Rail Conference (TCRC) Division 67 chair, representing CN workers in the Sault and Hawk Junction.

Cain and his fellow CN workers will be picketing Friday at the entrance of the local CN office on Carmen’s Way.

“Our contract ended July 23rd of this year. We’ve been bargaining for seven months, but it’s not about money,” Cain said, speaking to SooToday Friday.

“The main issue is quality of life, and rest.”

“A lot of us are working on call 24 and 7. Some of us never know when we’re going to get called out to work, but they expect you to be rested and ready to go. They’ll give you a call and tell you to be at work in two hours, and sometimes you’re gone for up to 40 hours on a trip. It’s really hard to be properly rested at times when you’re in a situation like that.”

Cain said CN job cuts (the company announcing Nov. 15 it would cut approximately 1,600 jobs, “adjusting its resources to demand”) have worsened the matter.

“With all the job cuts, they’re running some of these terminals with just a minimum number of guys. They’ve done a lot of layoffs, new guys and people who have been there for five to eight years. They’re expecting you to work more hours and have less time at home with your family, so your family life, quality of life is being affected and a lot of guys are running around, running these trains when they’re very, very tired, carrying a lot of dangerous commodities on these trains going through communities.”

“It’s very important for us to be well rested and on the ball when we’re working with these dangerous commodities. Our trains are bigger and bigger. As far as we’re concerned the company’s making it harder for us to be rested and fit for our jobs,” Cain said.

Cain said CN workers are asking the company for “more time at home, less sporadic schedules, to know in advance when we’re going to work so we can get the proper rest we need.”

“If you get really sick, drugs are really expensive and you can hit that cap within two or three years and what happens then? You have to buy yourself a plan and that’s very expensive. So, that’s a sticking point as well.”

Cain said both the union and CN are at the table and eager to reach a deal, assisted by federally appointed mediators.

Locally, CN ships out product from Algoma Steel, as well as lumber, goods from Michigan mines, gasoline and other commodities, the strike slowing the wheels of commerce and causing spin-off layoffs across Canada.

“It sure does hurt industry, I’m sure they would be concerned, but I know a lot of the unions in town have expressed their support for what we’re doing. The last thing we want to do is negatively affect our economy and the communities we service, but right now, this is what’s happening. The safety of the railway is in everybody’s best interests, but that means we have to be healthy and well rested to do that,” Cain said.

“This is what this is all about. Safety, and going home safely to our families every day.”

Seven new forest fires confirmed in the region on Wednesday
Jul 8, 2020 7:26 PM
Comments
We welcome your feedback and encourage you to share your thoughts. We ask that you be respectful of others and their points of view, refrain from personal attacks and stay on topic. To learn about our commenting policies and how we moderate, please read our Community Guidelines.