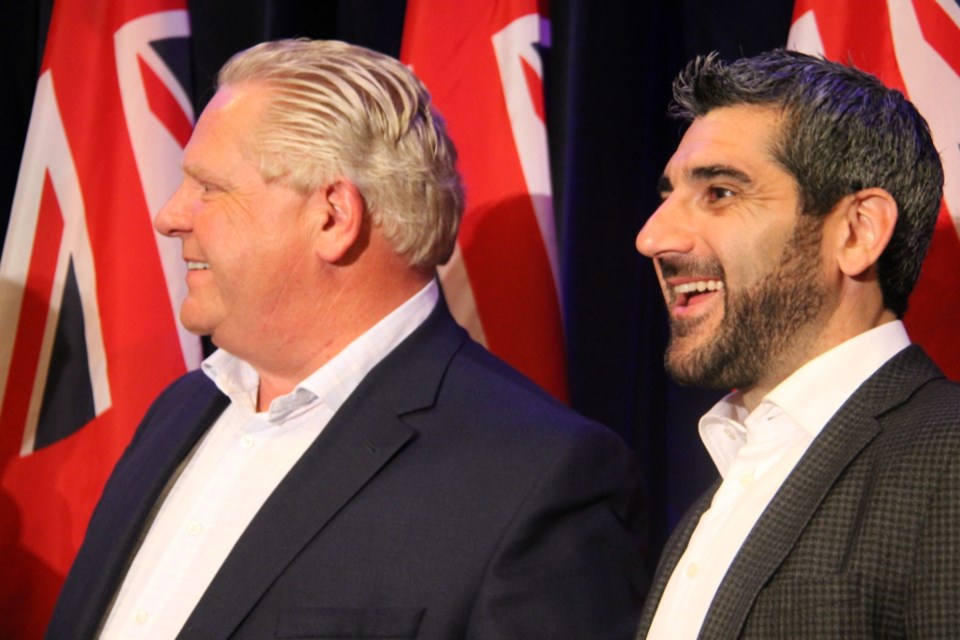 Doug Ford, Progressive Conservative party leader, with Sault MPP Ross Romano at a rally at The Water Tower Inn on May 1, 2018. Darren Taylor/SooToday

Ross Romano is getting nothing but flack from readers of Huffington Post Canada, after the news-and-views website published a story questioning our MPP's claim to be hearing "nothing but compliments" about his government's rollback of labour reforms.

"I'm sure Romano has received positive feedback from some people on the PC bill, but to claim that he hasn't received any negative feedback at all is insulting and treats people like they don't exist or their opinions aren't worth hearing," said one HuffPost reader.

"What Mr. Romano means is that he's gotten 'nothing but compliments' from the people that matter to him. A group which does not, not, not include minimum wage earners," wrote another.

"I call on the opposition MPPs and the people of Mr. Romano's riding to demand his immediate resignation," added a third. "Make as much noise as you can, disrupt question period, refuse to sit at committee meetings Mr. Romano is part of. Hound him every possible chance until he resigns."

Of 70 responses posted to the article by 1:30 p.m. today, not one defended Romano's nothing-but-compliments assertion, made in the Ontario Legislature during an Oct. 31 discussion of the Making Ontario Open for Business Act, 2018.

That bill froze the minimum wage at $14 an hour until 2020 and eliminated two paid sick days for workers.

Here's a full transcript of what the Sault MPP said:

I’m going to say this: I heard a lot of 'shame' coming from the other side of the room, and you know what? I am very proud of what we’re doing – very, very proud of the bill being proposed here. In fact, I’m so proud that I have been getting nothing but compliments from everybody back home – constant compliments because people are happy that we are finally getting rid of Bill 148 and all the negative aspects of it.

This was a job-killing bill. It was making life so much more difficult for businesses. It was making things so much more complicated. People earning what used to be the former minimum wage, actually, would say to me – young people – “Yes, it’s a really great idea that they’re going to move up our wages to $15, but I’m not going to have a job anyway because nobody is going to be able to afford to keep me.” You know what? They get it.

We look at what we’re doing to change the minimum wage. We’re going to increase that wage in 33 months’ time, and then we’re going to tie increases to the rate of inflation. Doesn’t that make a lot of sense? The former government had 15 years to do it, and then waited until right before an election to suddenly increase it by over two dollars an hour, overnight, and expected small businesses out there to be able to survive.

To the member from Niagara Falls: I really have a hard time believing that – really, what separates us, quite frankly, isn’t that much in our ridings in terms of what is important to people and what is important to businesses. All I hear is: Thank you, thank you, thank you to our government for getting rid of this horrible Bill 148, which was making things so complicated for business owners. We heard countless complaints. Just look at the facts: Over 50,000 people lost their jobs in the month of January last year alone. It’s projected to be 90,000 over the year.

We’re here to be open for businesses. We’re here to help businesses compete, because that is what we promised to do and we just keep our promises. Promises made....

McCleary was described by HuffPost as a "constituent," with no mention of his wife Sara McCleary's role in the last provincial election as communications co-ordinator for Romano's New Democratic opponent, Michele McCleave-Kennedy.

Mike McCleary told HuffPost that he had emailed Romano with a detailed list of concerns one week before the Sault MPP spoke at the legislature.

Meanwhile, if McCleary's social media postings last night are any indication, Romano and his constituency office staff haven't heard the last from him:

"Well, sorry to break to you, Ross, I'm not your Neville Chamberlain. I won't play your games of appeasement."

"Starting today, I will be emailing or calling Romano every time I need to call in sick."

"Every time I'm asked to do extra time or switch a schedule, I'm emailing Romano."

"I may even stop by Romano's office when I am sick to drop off a note saying I'm sick, just to prove a point."

"I'll continue to reach out to the community, and every time I hear about a minimum-wage earner struggling to make ends meet, I'm calling and emailing Romano," McCleary said.

Romano has denied interview requests related to this subject from both HuffPost and SooToday.

Horwath expressed disgust at the way Romano argued against an New Democratic motion that would have given cancer patients coverage for take-home cancer medications, comparing life-saving drugs to children squabbling over toys.

"We just can’t fund everything," Romano told the Ontario Legislature.

"Then they’re going to say: 'Well, daddy, I also want an ice cream.' 'Okay, I’ll buy you an ice cream too. All right. Hey, do you want it?' 'Absolutely.' But sooner or later, something’s got to give. I can’t buy them everything. If I’m really going to be reasonable in how I administer – because at the end of the day, we’ve only got so much money spread to go around. In Ontario, we’ve only got about $187 billion to play with. If we already spend over $60 billion on health, and of that we already spend about a billion on our medications for cancer alone, so what about everything else? Do you know what? If you want to fund everything and if the bar is going to be set that we should fund every single medication, even the ones that we barely know anything about – because that’s what this motion is."

“A cancer diagnosis is one of the scariest things anyone can face – it turns lives upside down,” Horwath responded in a news release issued today.

“Ontario can afford to be compassionate. We can afford to give cancer patients more help, more hope and less cost,” the opposition leader said.