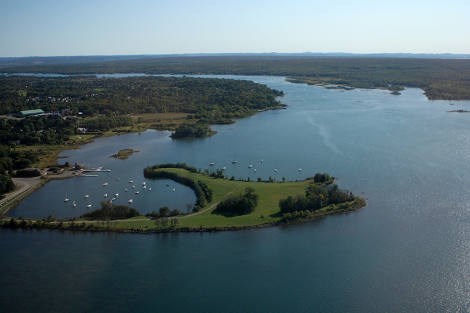 BATCHEWANA FIRST NATION - The Anishinaabeg Joint Commission calls on the governments of the U.S. and Canada, Michigan and Ontario, to do their jobs by investigating and enforcing public safety and clean water regulations in regard to the East End Sewer Treatment Plant in Sault Ste. Marie, Ontario.

The AJC met today for the first time in over a year and members were fueled with motivation to see movement of objectives outlined in the commission’s treaty.

Sault Tribe Unit I Director Cathy Abramson recently testified to the state of Michigan’s Natural Resources Committee, saying: “We have participated on the Binational Public Advisory Council, seeking action by the Canadian municipality, and at the same time working with many agencies to implement solutions to the pollution of the river. Our tribal fishers are the main participants in the St. Marys River fishery, and so we are concerned with all pollutants in Lake Superior and the river, not only the sewage discharge."

But, she acknowledged, sewage problems remain the most frustrating.

“I have personally been to the White House and our Congressional offices and EPA office in Washington, D.C., to show the federal government and officials our plight, unfortunately with few results,” she said. “In order to get better results, we must work together to solve this problem.”

These events caused raw sewage, partially treated sewage as well as solid waste and trash to flow into the St. Marys River, resulting in a rise in E. coli levels and beach closures along the river’s beaches and waterfronts.

The danger to residents and visitors along the river as well as its wildlife is unacceptable and the situation must be rectified.

The AJC’s objectives will be a test of strength and unity to protect the waters on both sides of the border, demanding proper authorities remedy this problem.

Chief Dean Sayers of Batchewana First Nation said: “We are calling on regulatory agencies to do their jobs - we encourage you to exercise your mandate and assume responsibility or we will be taking back jurisdiction to do so ourselves. We will be watching.”

AJC will also be monitoring the proposed shipment of nuclear waste across the Great Lakes.

This international group of bands is adamantly opposed to any kind of nuclear waste storage anywhere near the Cambrian Shield or the Great Lakes Basin and contests the expansion of nuclear energy.

Choosing Ontario as a deep geological repository for the long-term management of Canada’s used nuclear fuel is foolhardy when contemplating the disastrous consequences should safety measures fail.

The government of Ontario does not have the right to risk the safety of not only its own citizens, but also the citizens of First Nations.