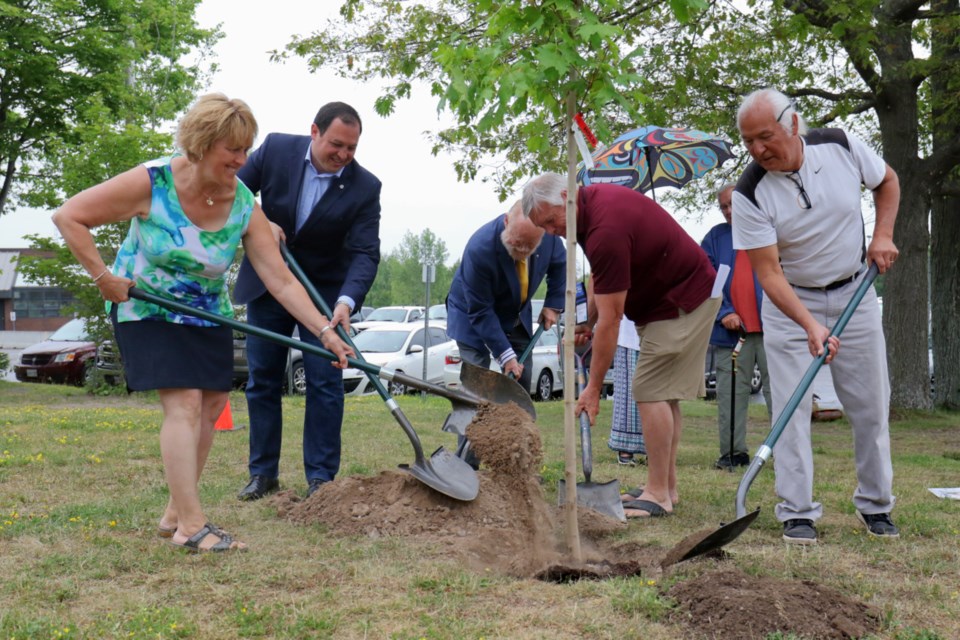 The Ontario Maple Syrup Producers’ Association (OMSPA) kicked off its annual general meeting and summer tour Thursday morning with the planting of a single maple tree on the campus of Sault College.

The OMSPA summer tour will see close to 200 maple syrup producers from across the province engage in a series of discussions, presentations and site tours of maple syrup production sites in the Algoma District over the next three days.

“It’s a sharing of knowledge, so we bring specialists in to give guest presentations on the newest technology, the newest standards, the quality, the innovation,” said OMSPA past president Ray Bonenberg. “So it’s really a coming together, it’s like an educational seminar.”

One of the highlights of this year’s annual general meeting is the unveiling of a new, 80-page feasibility study entitled, Filling Ontario’s Needs: A Maple Syrup Bottling Facility Feasibility Study.

The study claims that if a bottling facility were to be developed, Ontario’s maple syrup output would increase by 25 to 40 per cent.

Access to Crown land, the association says, would also increase that output.

According to the association Ontario possesses three times the hectares of maple dominant forests, and that’s why OMSPA president Brian Bainborough says it’s time to find a way of accessing swaths of Crown land in the name of increasing the province’s production of ‘liquid gold.’

“The biggest thing we need is access to Crown land, and the more access we have to Crown land we have, the more that we can tap,” Bainborough said. “There’s so many thousands of acres just north of here that’s Crown land that has unbelievable maple on it, and if we can get access into it, we can produce more syrup.”