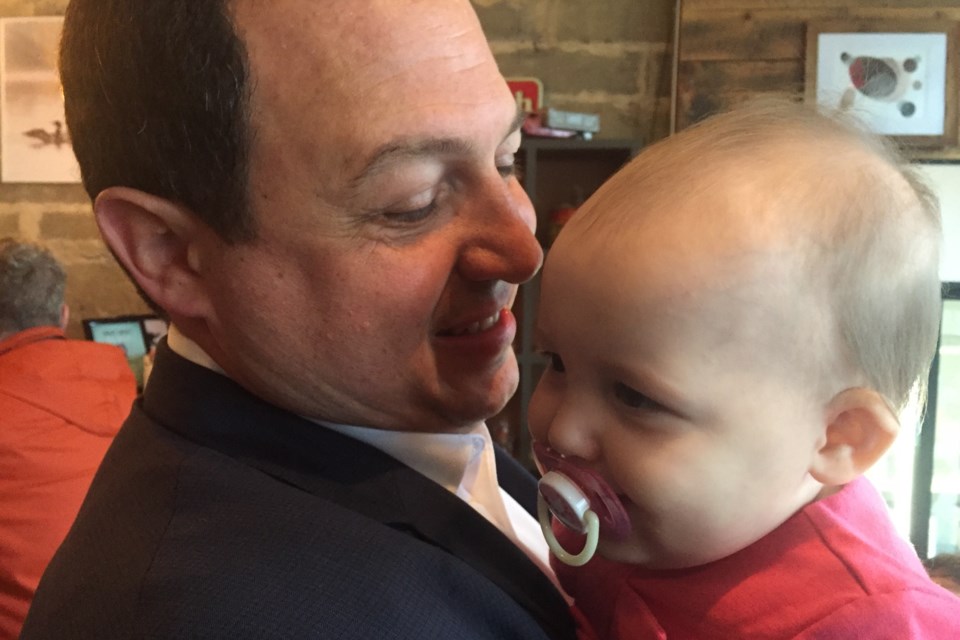 "I want to thank the guys from Outspoken for hosting us," Provenzano told a packed house at the brewhouse at 350 Queen St. E.

"Their patio outside here is a great example of how the city can support and encourage business. That patio is entirely on city property, city planters in fact, and would not have happened had we not worked with and supported these guys and their business," he said.

"You will have noticed other patios popped up along Queen Street this summer. We can thank Outspoken for leading the way."

The mayor's supporters include Ron Irwin, the 81-year-old former mayor, member of Parliament and diplomat.

Irwin will be joining him on the campaign trail, knocking on doors, Provenzano announced.

The mayor ran through a lengthy list of achievements during his first term as mayor.

"While I ran in 2014 because I believed that we needed to do things differently, I believed that our community was headed into a difficult period, although I cannot admit to anticipating the depth of the difficulty at that time."

"I understand and appreciated the instability of the OLG [Ontario Lottery and Gaming Corp.], but we did not know that oil prices would plummet, putting in excess of 500 Tenaris employees out of work, or that Essar Steel would start a very long and difficult receivership process, or that the city would be out millions of tax dollars."

"But those things happened, as events do, and when they happened we did not shrink from them or react hastily. We worked through them calmly and with resolve."

Despite advances made in the past four years, Mayor Provenzano cited a number of challenges remaining in Sault Ste. Marie:

Provenzano nonetheless pointed to a number of opportunities, including leading-edge PUC smart grid and battery storage projects, major capital investment in the steel mill, transit improvements, downtown revitalization and the potential for a billion-dollar ferrochrome smelter.

"Think about all of that," the mayor said.

"Just take a second and think about that we did in just under four years, amidst all those challenging circumstances. Now, think about what we could do if we kept on for another four."