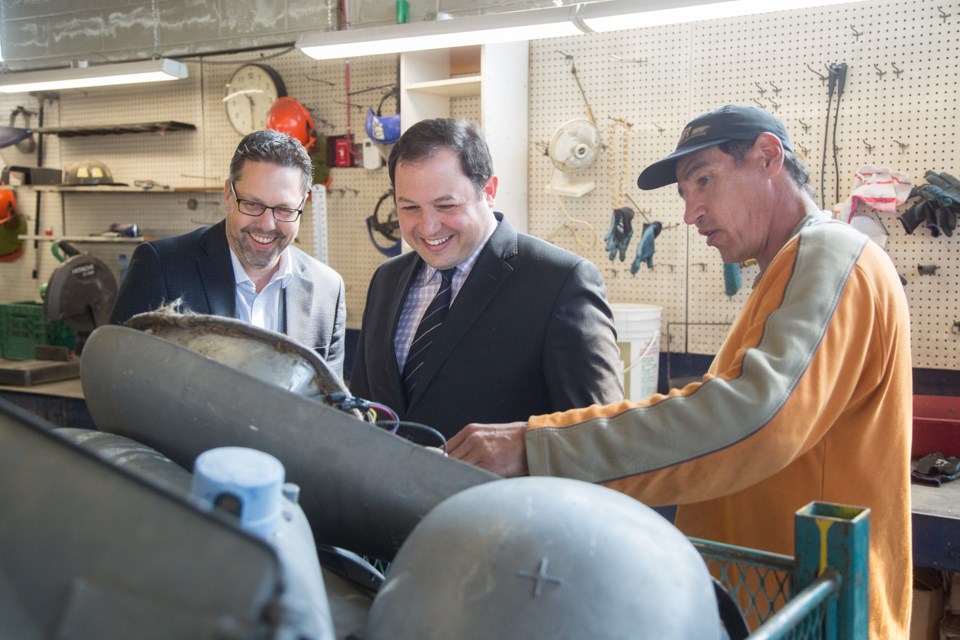 An unconventional partnership which aims to recycle the city’s 9,000 streetlights has been recognized with a national award from Habitat for Humanity.

The initiative, which began about a year ago as a Superior Skills program offered to Ontario Works recipients, involved the processing of the former streetlights — as well as other scrap wire and materials — from Algoma Power and the PUC.

The streetlights are disassembled and separated into their base materials, mostly metals, which can then be recycled or sold for scrap.

The resulting company, Work Co., was created as a partnership between the local Habitat for Humanity and Riversedge Developments.

“It’s all agencies coming together for four new jobs. We’re starting a company in the Sault that employs marginalized people and it’s never been done in Ontario before,” said Nadeau.

The project is self-sustaining, says Nadeau. No public money is being used after the initial training, all salaries come from proceeds of the sale of the scrap metal harvested from the streetlights.

Police Chief Bob Keetch said the police service’s involvement is not unlike the Community Resource Centre on Gore Street — bringing different services together — but this initiative creates revenue.

Keetch said a dinner with Riversedge Development CEO Justus Veldman helped him realize the community policing model can be applied to a revenue-generating venture, not just the offering of community services.

He said the Ministry of Community Safety and Correctional Services has its eye on this initiative.

“That’s a tremendous endorsement of the work that has been done and the model that is being proposed,” said Keetch.

Colin Glassford, director of operations for the local Habitat for Humanity, said they received the Social Enterprise Award from their parent organization in recognition for finding an innovative new stream of revenue during a challenging economy.

“It’s unique. It’s the first time in Canada that anyone has captured this kind of revenue stream,” said Glassford.

A portion of the proceeds will go toward the various building projects the local Habitat for Humanity is involved in, including a two-family semi which will be complete by the end of June.

The revenue created by the Work Co. project will take some pressure off future fundraising efforts, said Glassford.

“We’re a unique charity because all of the administration costs from the organization are paid for through the ReStore. So when people donate [money] to us, they are donating dollars that go to building homes. None of that money covers my salary or any of my staff,” he said.

An ongoing misconception by the public at large, says Glassford, is that recipients receive a home for free.

In fact, the recipients pay a mortgage.

Dominic Parrella, PUC president and CEO, said there is much more value in donating the materials than the approximately eight cents a pound they would receive if they sent the material for processing in southern Ontario.

PUC receives a tax-deductible receipt for donation of the scrap.

Nadeau said these kinds of community partnerships are important, especially during the city’s current economic climate.

“No one person can address the economic deficiencies the community is currently going through. It’s going to take a community and innovative partnerships to get us through what we’re going through,” said Nadeau.