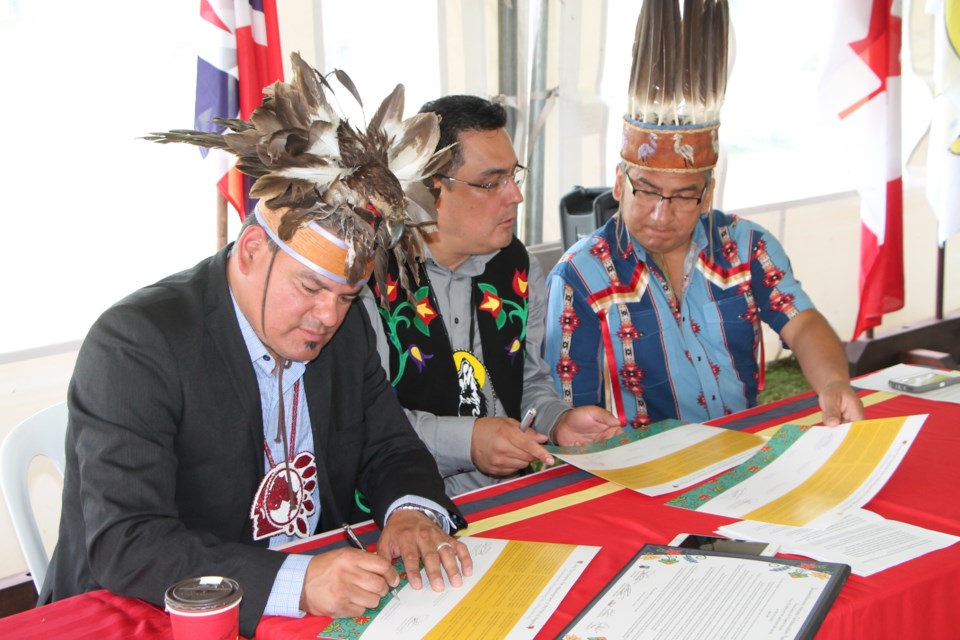 “The area indigenous leaders who are a part of this unity pact recognize that we are part of a larger fabric of people,” said Chief Dean Sayers of the Batchewana First Nation. “We look forward to continued mutual collaboration that will protect and enhance our natural environment.”

The ceremony took place at the same spot where the Robinson-Huron Treaty was ratified in 1850.

The pact speaks to the shared vision amongst area First Nations and the Port of Algoma.

Specifically, it highlights a common understanding of the need to protect nature while generating economic diversification to support a brighter future and quality of life.

“This is a historic day with the signing of the unity pact,” said Chief Paul Syrette of the Garden River First Nation. “The unity pact aligns with the reconciliation and prosperity accord signed earlier this year with the Port of Algoma. The Anishinabeg of Bawating and the Port of Algoma share a common vision to build a strong economic future and a sacred trust that Chief Shingwauk talked about during treaty negotiations in 1850.”

“Today’s historic signing of the unity pact is a commitment to consultation, cooperation and a shared vision between our First Nations communities and the Port of Algoma, and highlights the need to protect nature while advancing important infrastructure projects in Sault Ste. Marie. Investments in infrastructure projects like the Port of Algoma strengthens the economy in our community, as well as across the province," said David Orazietti, MPP

Over the past several months Anishineabeg leadership from several surrounding First Nations have worked closely with Port of Algoma.

Discussions included protocols to accommodate the individuality of each nation and identifying a common vision on how to work together in the spirit of friendship and unity.

“I’m proud to be witness to today’s unity pact signing between local First Nations and the Port of Algoma,” said MP Terry Sheehan. “This unity pact, in combination with the accord signed earlier this year - which I was also honoured to witness - is important to the economic success of Sault Ste. Marie and the surrounding area. Our government was elected on the premise that we can achieve great things when we work together, in our case by building a strong nation-to-nation relationship with First Nations in this country. This unity pact is a great example of that in the private sphere. It marks another milestone in a great partnership.”

Today’s ceremony is a result of Indigenous leadership coming together and making a commitment of unity in order to protect the natural resources. Together, with Port of Algoma, a promise has been made to show respect for our air, water and land as the redevelopment project takes place.

“We are very happy to be a part of the unity pact,” said Anshumali Dwivedi, CEO of the Port of Algoma. “We are undertaking a collaborative process with a shared vision. Mutual respect and understanding are key to this type of project, and reflects the respect Essar Global portfolio companies have for the environment and aboriginal issues. We look forward to continuing to collaborate with area First Nations on building a diversified economy and sustainable environment for future generations to enjoy.”

The Port of Algoma is a redevelopment project that aims to take advantage of the area’s strategic location at the heart of the Great Lakes, on the Trans-Canada Highway and adjacent to U.S. Interstate-75.

Construction of the port is expected to create 1,350 full-time jobs, with an estimated 250 permanent jobs and 1,200 spin-off jobs to be created once the facility is fully operational. Online: www.algomaport.com.

About Port of Algoma

Port of Algoma Inc. (POA) is a portfolio company of Essar Global Fund Limited (EGFL), a global investment fund with majority ownership in a number of world-class assets diversified across core sectors of energy, metals & mining, ports & infrastructure, and services, and has adopted international standards of accounting, health & safety, environmental protection and governance.

POA is held as a part of the ports and infrastructure vertical of the group by Essar Ports and is incorporated as a separate legal entity from Essar Steel Algoma Inc.

POA has separate management and premises from ESAI, and its charter documents and the legal agreements to which it is a party require it to conduct business separately and at arm’s length from ESAI.