It is a major step forward for Sault Ste. Marie's vision for a deep water port. Elected officials, city of Sault Ste.

Darren Taylor
Sep 26, 2014 3:26 PM
Previous Next
1 / 1 A map showing the proposed Port of Algoma seen on September 26, 2014 at the Civic Centre in Sault Ste Marie.Kenneth Armstorng/SooToday
Expand
Previous Next 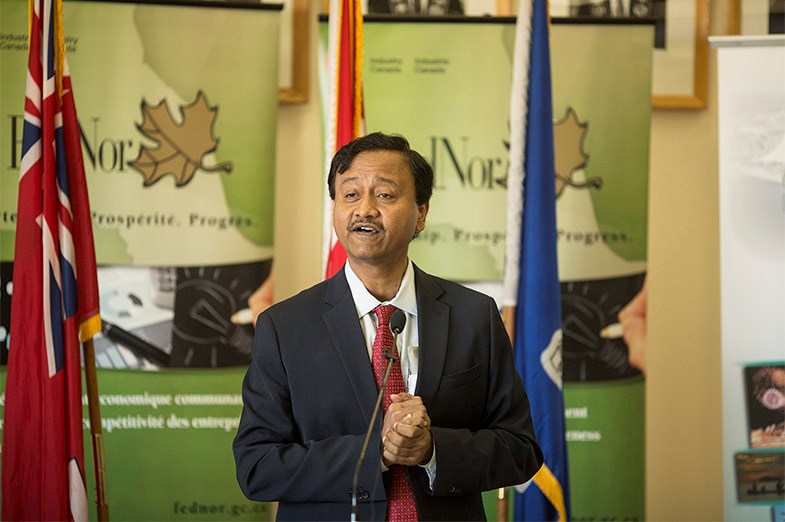 It is a major step forward for Sault Ste. Marie's vision for a deep water port.

Elected officials, city of Sault Ste. Marie staff, and representatives of Essar Steel Algoma gathered at the Civic Centre Friday to announce funding has been provided towards development of a deep water port, which will enable Essar Steel Algoma and other local industrial players to increase output and have a greater opportunity to ship out their goods in the global economy.

The port project, identified as Sault Ste. Marie's greatest economic priority in the years to come, will receive $2,120,000 each from the federal and provincial governments, $800,000 from Essar Steel Algoma and another $300,000 from the city of Sault Ste. Marie (to be formally discussed by city council Monday) for planning and design of the project, environmental assessment and consultation with First Nations communities.

The term "game changer" was echoed by several political and business leaders at Friday's announcement.

Total estimated cost for construction of the port facility, on Essar Steel Algoma property, is $120 million.

It is hoped that the Port of Algoma will be open about 10 years from now, depending on fast the project moves through its various phases.

Essar Steel Algoma CEO Kalyan Ghosh told reporters "we are targeting six to eight months" for the planning and design phase to be completed, but businesses are already welcome to use the existing Essar Steel Algoma dock facilities, to plant seeds for economic growth in the future.

"The port will help us to improve our volumes to the next level which is the four million tonne level (and ship them out to international markets) and reduce our handling costs."

"If we are doing $2 billion in sales today, the port will give us another $800 million of revenue annually," Ghosh said.

Ghosh said the steelmaker will be providing one third of the total cost for the port project, and is hopeful the senior levels of government will come through with the rest.

Ghosh said "the governments understand the importance…the port will generate huge employment and volumes, huge revenue potential, and the government will be able to see that and give us the rest of the money."

Orazietti said the port represents "a bright light" for the city's economic future in the wake of the major economic downturn of 2008.

Sault Mayor Debbie Amaroso said "this port will significantly change the economic climate of this community," pointing to figures that show Essar Steel Algoma in particular will be able to generate hundreds of millions of dollars more in sales annually and that 1700 new, direct and indirect jobs will be created for the Sault and area when the port eventually becomes a reality.

Ghosh said the port "will make it (the steelmaker) one of the most sustainable companies in North America and ready to expand" after a restructuring this summer.

Joining Ghosh was Anshumali Dwivedi, head of business development and investor relations of Essar Ports, based out of Mumbai, India, who shared Ghosh's enthusiasm and said actual construction of the port will take several years and need careful planning.

The involvement of Essar Ports in the harbour project was announced today.

Transportation and Infrastructure Committee Chair Don Mitchell said "this will definitely open up new markets for the north…it will be a game changer for years to come."