Keetch said the intent of the meeting was to 'improve the process in the future'
Nov 5, 2016 8:00 AM By: Kenneth Armstrong 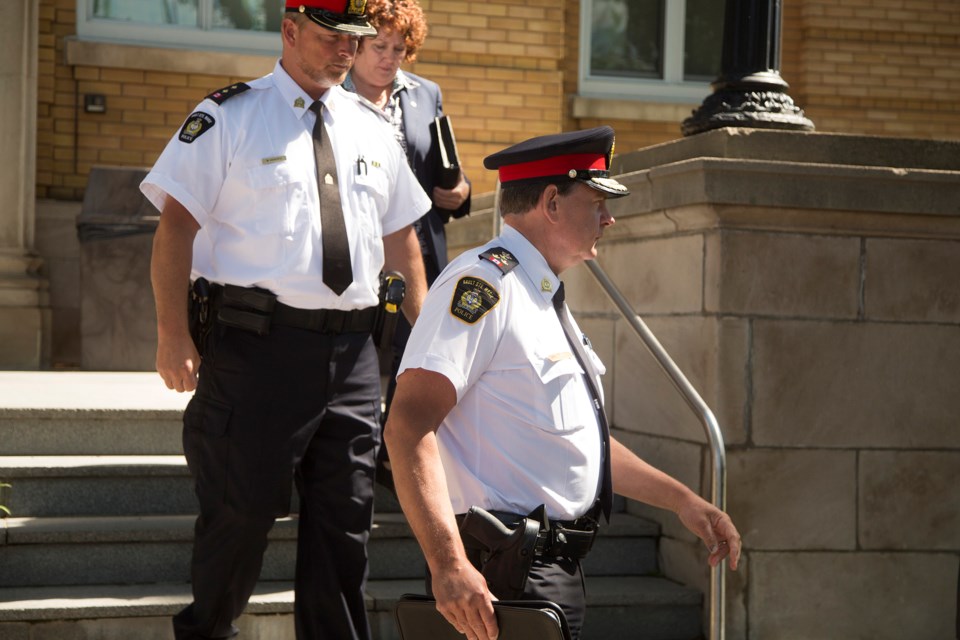 Police Chief Bob Keetch walks out of the court house Jul 28, 2016 as the men charged in the 2011 death of Wesley Hallam make an appearance. Kenneth Armstrong/SooToday

Sault Ste. Marie’s chief of police says he is satisfied with the result of a meeting with the Attorney General’s office regarding the Crown's handling of a controversial plea arrangement in the Wesley Hallam homicide case.

In a press conference held immediately after the July 28 plea that saw Ronald Mitchell, Dylan Jocko and Eric Mearow each convicted of manslaughter in Hallam's 2011 death, Keetch said the police service was disappointed with the outcome and he would request a meeting with the Attorney General of Ontario.

At the time, Keetch said the police service had no prior awareness or input into discussions regarding a reduction of charges for the three men, who had originally faced first-degree murder charges, and said he would request an independent third-party investigation into the handling of the case.

Reached by telephone yesterday, Keetch said the request was never formally made by himself or considered by the office of the Attorney General.

Keetch declined to speak to the specifics of the October meeting, but said he is satisfied with the outcome.

“We had about an hour-and-a-half to two-hour meeting. Good discussions. I thought it was a very positive meeting,” said Keetch.

The intent of the meeting, said Keetch, was not to change or overturn the outcome of the case.

“The intent was to speak to process, improve the process in the future. I am quite confident that was one of the outcomes that we were looking for,” said Keetch.

It is critical, said Keetch, for the police service and local Crown's office to maintain an effective working relationship moving forward.

Keetch said that professional relationship between Crown and police was shown in the recent second-degree murder conviction of Ronald Freeman in the death of Pat Gregoire.

“I heard back from the officers involved in the most recent prosecution and conviction with regards to a murder in our community. They had a great relationship with the Crown and both were extremely satisfied with the outcome of that prosecution,” said Keetch.

After the meeting with Cornish, Keetch sat down with the victim’s mother, Sandra Hallam, to brief her on the outcome of the discussion.

Keetch said the Hallam homicide will have a long-term effect on the entire community.

“We had a very violent crime that occurred in our community that I think offended all of us. That is going to have a lasting impact. Traditionally you don’t see a crime of this nature occur in a community like Sault Ste. Marie. I think it will be a long time before people will forget that,” said Keetch.

The homicide will have a long-term effect on those in the local police service as well, said Keetch.

“Investigators who were assigned to this investigation — obviously it has had a lasting effect on them. Those that worked closely with the Hallam family established an extremely close relationship and watched that family go through tremendous pain throughout this entire investigative process and court process,” said Keetch.

Mearow, Jocko and Mitchell have been in custody since they were arrested in early 2011.

The three men were expected to go to trial for murder but instead pleaded guilty to the charge of manslaughter.

Mitchell was sentenced to 22 months, while Jocko and Mearow received sentences of two years less a day.

Allowances were made in the sentencing of all three men for time already served.