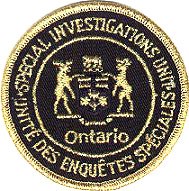 BARRIE, ON, October 5 - The Ontario Provincial Police Association (OPPA) is appalled with recent comments made by Ian Scott, director of the province's Special Investigations Unit (SIU), that attempt to cast doubt upon the integrity of two OPP officers and their association lawyer.

"We must reply to this attack in order to protect the officers, their lawyer and their right to legal counsel," OPPA President Karl Walsh said.

In a news release, dated September 28, SIU stated it had cleared two OPP officers in the shooting death of a Peterborough man in a remote area of northwestern Ontario, but implied the officers and their lawyer acted inappropriately in the preparation of their notes.

The director, having been fully advised of what occurred by his own investigative and forensic units as well as the involved officers who cooperated with the investigation, failed to disclose all of the pertinent details of the incident.

These are the facts.

On June 24 of this year, two officers from the Pickle Lake detachment were investigating a stolen boat occurrence in the Osnaburgh Lake area and came upon Mr. Levi Schaeffer.

When the officers began to speak with the man he began acting in an evasive manner.

When the officers got close to him, he attempted to retreat into his tent.

The officers, not knowing what was in the tent and fearing for their safety, attempted to take control of Mr. Schaeffer.

A short struggle ensued and Mr. Schaeffer pulled a knife from his pocket and attempted to slash the officers.

The officers retreated, drew their firearms and ordered Mr. Schaeffer to drop the knife numerous times, as well as issuing the "police challenge."

Mr. Schaeffer began moving towards the officers with the knife in his hand and he also armed himself with a can of bear spray.

The officers continued to yell at the suspect to drop the knife but it had no effect.

The officers warned the man that if he didn't drop the knife he would be shot.

The man ignored the officers' demands, kept advancing towards them and threatened to kill them.

Due to the landscape of the area, the officers were unable to retreat any further.

One of the officers who feared for his life discharged his firearm striking the man.

The officers immediately began performing first aid on Mr. Schaeffer, but unfortunately, he succumbed to his injuries.

The officers called for assistance and preserved the scene for the SIU investigators.

The officers did everything they could to avert a tragedy but unfortunately, Mr. Schaeffer left them with no choice.

Had they not acted in self-defense, either one or both of them would have been seriously injured or killed.

In reply to the SIU's press release, the OPPA is particularly appalled with the director's inference that the officers' notes were "drafted" for the "approval" of their counsel.

The officers exercised their right, as every citizen in Canada has, to retain and instruct legal counsel.

Given the isolated location of the incident and the lack of reliable communications, some information was reduced to writing.

This is an accepted practice and those documents are protected under solicitor/client privilege.

The suggestion that the notes in the officers' notebooks are anything but independent and reliable is completely false.

The notebooks provided to the SIU contain a very accurate depiction of what occurred on June 24, 2009.

The lawyer did not tell the officers what to write in their notebooks.

"The OPPA has long accepted the fact that there must be civilian oversight of policing in Ontario. For the past many years, relations between the OPPA and the SIU have been quite well established, with each side respecting the job that the other had to do. This situation, however, has put a strain on that relationship," Mr. Walsh said.

"These two officers did nothing wrong either in their dealings with Mr. Schaeffer or with their lawyer. This incident is a tragedy not only for the Schaeffer family but for the officers themselves. The Schaeffer family, the officers and the citizens of Ontario are entitled to have the results of the investigation released to them," Mr. Walsh added.

MISSISSAUGA (September 28, 2009) - The director of the Special Investigations Unit (SIU), Ian Scott, has concluded that there are no reasonable grounds to believe that an Ontario Provincial Police (OPP) officer from the Pickle Lake Detachment committed any criminal offence in relation to the death of a 30-year-old Peterborough man in June of this year.

The SIU investigation determined that on June 24, 2009 at approximately 12:30 p.m., two OPP officers approached Levi Schaeffer in the Osnaburgh Lake area regarding a stolen boat.

There was an interaction of sorts, and the subject officer discharged his firearm at Mr. Schaeffer, causing his death.

Director Scott said, "Beyond that, I am not sure what happened. There is no contemporaneous information of this incident such as civilian witnesses, audio or video recordings, and there were only three individuals at the scene: the now deceased Mr. Schaeffer and the two officers. However, I cannot place sufficient reliance on the information provided by the officers to decide what probably happened.