Paul Harvey Aurandt, known to millions of radio listeners worldwide as Paul Harvey, has died, ABC News is reporting. He was 90. Shown receiving the Presidential Medal of Freedom in 2005 from President George W.
Feb 28, 2009 8:07 PM By: David Helwig 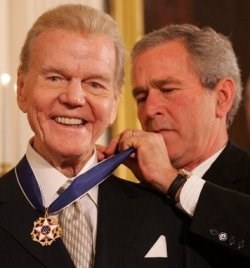 Shown receiving the Presidential Medal of Freedom in 2005 from President George W. Bush, Harvey was best known for his "News and Comment" and "The Rest of the Story" broadcasts.

He died in hospital in Phoenix, surrounded by members of his family.

The following is Harvey's official biography:

During his time in those newsrooms, he has broadcast the news to millions, built an active professional life and established himself as one of the foremost newsmen in the business.

Born and raised in Tulsa, Oklahoma, Mr. Harvey began his radio career in 1933 at KVOO-AM, Tulsa, while he was still in high school.

Later, while attending the University of Tulsa, he continued working at KVOO as an announcer, then as a program director.

After graduation, Mr. Harvey spent three years as a station manager for a local station in Salina, Kansas.

From there, he took a newscasting job at KOMA-AM in Oklahoma City, then moved on to KXOK-AM, St. Louis, where he was director of special events as well as working as a roving reporter.

Mr. Harvey moved to Hawaii in 1940 to cover the U.S. Navy as it began to concentrate its fleet in the Pacific.

He was returning to the United States from that assignment when the Japanese bombed Pearl Harbor.

Paul Harvey enlisted into the Army Air Corps, where he served until 1944.

After leaving the corps, Mr. Harvey moved to Chicago, where in June 1944, he began broadcasting from the ABC affiliate WENR-AM. He quickly became the most listened-to newscaster in Chicago.

Paul Harvey reached audiences way beyond the Windy City in 1951, when he began his coast-to-coast "News and Comment" on the ABC Radio Networks.

On May 10, 1976, Mr. Harvey began another series of programs on the ABC Radio Networks entitled "The Rest of the Story", which delve into the forgotten or little known facts behind stories of famous people and events.

Today, Paul Harvey "News and Comment" and "The Rest of the Story" can be heard every Monday through Saturday.

Paul Harvey News is the largest one-man network in the world, consisting of over 1,200 radio stations, 400 Armed Forces Network stations that broadcast around the world, and 300 newspapers.

Paul Harvey's reach continues to broaden in the 21st Century, as "News and Comment" is streamed on the world wide web twice a day.

Mr. Harvey is married to the former Lynne Cooper of St. Louis.

They have one son, Paul Jr.