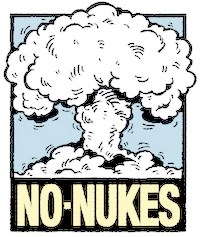 TORONTO - During the Chiefs of Ontario annual health forum on February 22, an emergency meeting was called by Grand Council Chief Patrick Madahbee of the Anishinabek Nation.

Representatives from numerous First Nations and organizations met to discuss the threat posed by the shipment of 16 nuclear steam generators through the Great Lakes and St. Lawrence Seaway.

"First Nations have expressed their adamant opposition to this shipment," said Ontario Regional Chief Angus Toulouse. "The Union of Ontario Indians and the Mohawk communities of Kahnawa:ke, Akwesasne and Tyendinaga are at the forefront of opposing the shipment, and the Chiefs of Ontario will support them in this struggle."

The Anishinaabek, Mushkegowuk, and Onkwehonwe chiefs in assembly, made it clear in their We Are The Land declaration: "What we do to the land - we do to ourselves, and to our future generations. We draw from sacred law, traditional law, customary laws - we need to protect the lands, the waters and all living things for future generations."

The regional chief further stated: "The United Nations Declaration on the Rights of Indigenous Peoples says that states must take effective measures to ensure that no storage or disposal of hazardous materials shall take place in the lands or territories of Indigenous peoples without their free, prior, and informed consent. It is appalling that the government of Canada hasn't even consulted with the affected First Nations on this shipment."

The generators will leave from Owen Sound and pass through Georgian Bay, Lake Huron, Lake Erie, Lake Ontario and the St. Lawrence.

The shipment required approval by the Canadian Nuclear Safety Commission as the shipment size and its radioactivity exceeds allowable transportation limits for a single shipment.

The chiefs in Ontario, comprising the 133 First Nations in Ontario, is a political forum and secretariat for collective decision-making, action and advocacy.