A team of researchers who worked on the documentary 'Painted Land' won a Canadian Screen Award
Mar 8, 2017 8:30 PM By: Kenneth Armstrong 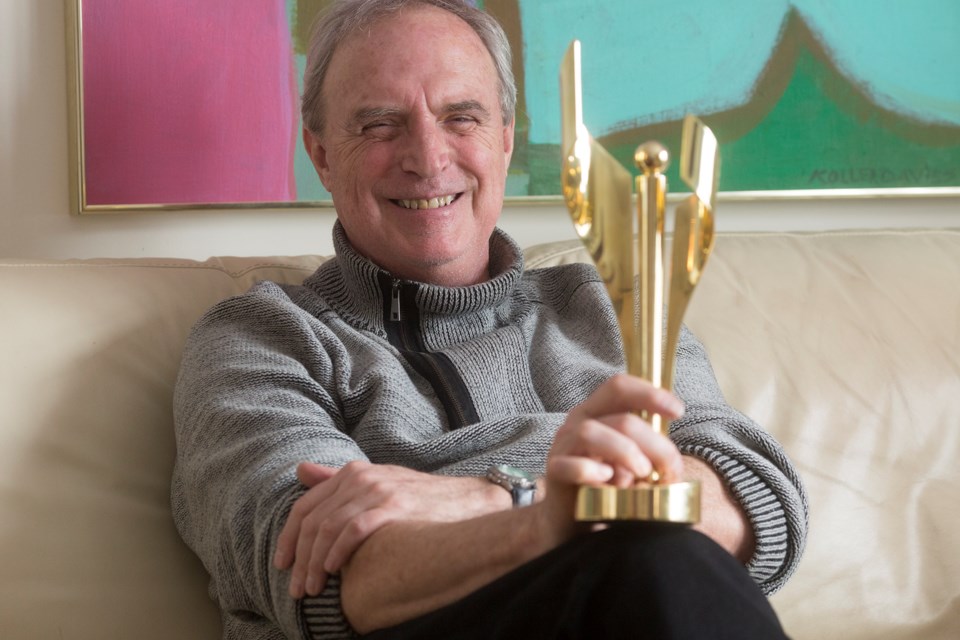 Michael Burtch seen at home today, holding his Canadian Screen Award. Burtch was among the winners of The Barbara Sears Award for Best Editorial Research for the documentary film 'Painted Land'. Kenneth Armstrong/SooToday

When Michael Burtch began his project to find Group of Seven painting sites, he never imagined his research would result in a Canadian Screen Award.

Even while sitting in the audience last night, he was not expecting the end result of that project — the documentary film Painted Land — to take home The Barbara Sears Award for Best Editorial Research.

“Last night we were just enjoying ourselves at the gala. Our category came up and I was ready to applaud someone else when they called our name,” said Burtch.

“I was literally — and I am not being falsely modest — I was really really resigned and honoured just for the group having been nominated,” he added.

Burtch shares the award with Gary and Joanie McGuffin, Nancy Lang, Rebecca Middleton and Emma Hambly, who all worked in a research capacity on the film.

Although he has won a number of awards, Burtch considers this one to be a pinnacle achievement.

“Because it’s about the research, it has a lot of personal meaning to me because so much of what I have done throughout my life has been based on research,” said Burtch.

The project was originally planned to take the form of a coffee table book, Burtch said.

A chance meeting with the principals of White Pine Pictures during the 2013 Algoma Fall Festival showing of West Wind — another Group of Seven documentary — resulted in Burtch’s project morphing into a documentary film.

“We showed them what we were doing and offered to take them up to some of the sights on the tour train. We did that and I think at that point (they) realized there was potential for a documentary in there,” said Burtch.

Although Burtch began researching the actual sites used by the Group of Seven shortly after he arrived in Sault Ste. Marie in 1981, the project really began to take form after his retirement.

“I did a little bit on my own whenever I could, but I was teaching at the university and running the art gallery and raising a family. But when I retired in 2008 I could devote my time to it,” said Burtch.

He recalls Dr. Al Gordon walking into his office one day, ultimately revealing a location of one of the Group of Seven locations in Algonquin Park.

“I am sitting there with an open book with Tom Thompson’s famous painting Northern River and Al says,’I know where that’s painted,’” said Burtch.

Last night, when he banged into Indigenous Affairs minister Carolyn Bennett at the gala, Burtch took the opportunity to advocate for the return of the Algoma Central Railway passenger train service.

“We couldn’t have done the film — or the film would have been a hell of a lot harder to do — without the passenger train,” said Burtch.

Indigenous Affairs is currently handling the Missinabe Cree’s request for funding to operate the ACR passenger service after Transport Canada passed the file over last year.

“(Bennett’s) ministry is really supportive, from what I understand. There needs to be a few more ministries — like Transport Canada — getting involved. I did make a pitch that it would be so good to see the Missinabie Cree run the train and really be able to develop it for everybody,” said Burtch.

Gary McGuffin, who was also named in the award, said many locations showcased in the film would be next to impossible to access now that the train has ceased operation.

Some painting locations, such as Bridal Veil Falls, can still be seen from the Agawa Canyon Tour Train, but Burtch notes you are unable to get out and explore the site in depth.

“Knowing where they painted, for me as an art historian, is to understand how they envisioned the land,” said Burtch.

Prior to yesterday’s gala in Toronto, Burtch took a stroll through the Art Gallery of Ontario.

“Walking through the Group of Seven section and there’s all of these paintings — Batchawana River and Mitchell Lake and Bridal Veil Falls and Solumn Land. It’s great to see all of these iconic paintings and know that they (were painted) here,” said Burtch.

“This is where, I think and most art historians agree, their best work was done. Certainly they did great work on the west coast and east coast and arctic, but they came together here,” he added.