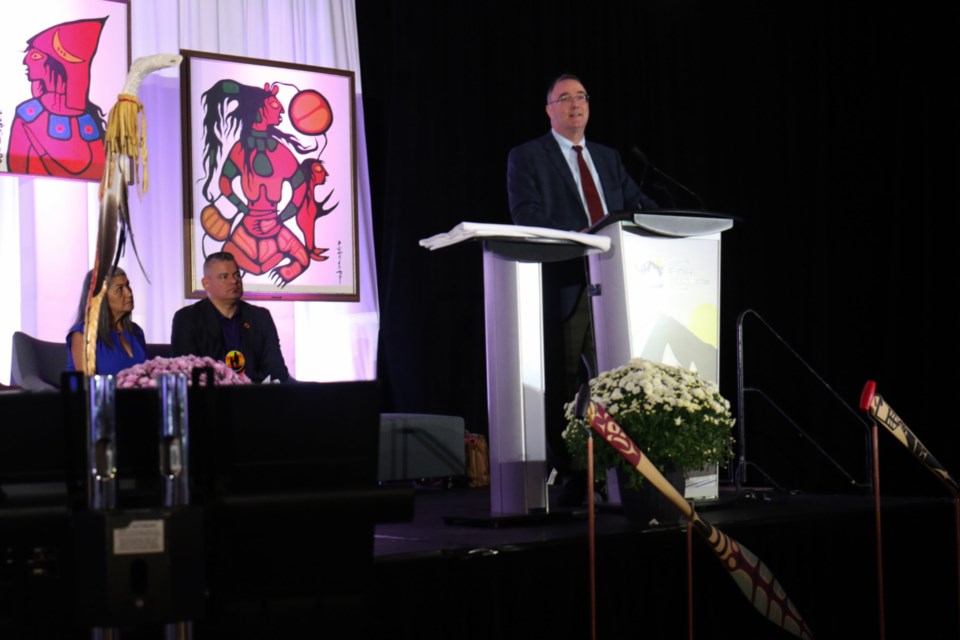 The 5th annual National Building Reconciliation Forum is taking place over the next two days at Algoma University, bringing more than 300 university representatives and leaders from across Canada to the former residential school site to engage in talks surrounding the road to reconciliation between Indigenous and non-Indigenous peoples.

The two-day event kicked off with opening ceremonies during a pre-forum gathering at Bellevue Park Tuesday morning.

“It’s terrific to be in Sault Ste. Marie to gather leaders from across Canada – higher education leaders, chiefs – to reflect on the experience of Indigenous people, the truth and the journey towards reconciliation,” Universities Canada President Paul Davidson told SooToday following his welcoming remarks to delegates Wednesday. “Universities have a powerful role to play in both improving access and success for Indigenous students, but also for advancing research and also for engaging the broader community about the reconciliation journey.”

Algoma University President Asima Vezina says that registration had to be closed about a week-and-a-half ago due to the fact that the forum had already reached maximum capacity.

“It’s a celebration of the work that’s happened over the course of the last five years,” said Vezina. “The fact that we’re doing it on the site of a former residential school, I think, is significant because it’s really given us an opportunity to connect with the truth of Canada’s history from coast to coast.”

“People have come here from over a hundred educational organizations – [a] very significant presence of universities here – and really wanting to deepen their understanding of that particular time period in Canada’s history.”

The former Shingwauk site also held a great deal of significance for organizers when the Algoma University campus was selected as the site for the 5th annual National Building Reconciliation Forum.

“The fact that the university is on the Shingwauk grounds is very, very powerful,” said Davidson. “Yesterday, a number of us spent time with survivors – hearing their firsthand reflections, their firsthand experiences – and it makes it very real when you say, ‘these events took place here.’ This isn’t something you’re reading about in a history book, or something you see in a movie or a film, but right here on these grounds.”

A total of 13 educational workshops are scheduled to take place during the first day of the forum, which will include talks surrounding Indigenous university courses, Truth and Reconciliation Commission calls to action and Indigenized curriculum.

The fifth anniversary of the event also sees the retirement of the forum’s spiritual item – a walking stick – and the introduction of three paddles that were created by a west coast artist.

Vezina says the paddles will travel to each National Building Reconciliation Forum over the next five years.

“These three paddles now will continue the work of the walking stick,” Vezina told SooToday. “They’re meant to represent the elders, the adults and the young people, and it encapsulates spirit, mind and body – and the important work we still have to do in reconciliation.”

“This forum, it’s not just about today and now, but it’s about setting the conditions for this next chapter in what we call reconciliation.”

The event wraps up with closing ceremonies Thursday afternoon with the announcement of the 2020 host for the National Building Reconciliation Forum.

Local hockey rinks tend to be Carr’s home away from home
Feb 22, 2020 9:30 AM
Comments
We welcome your feedback and encourage you to share your thoughts on this story. We ask that you be respectful of others and their points of view, refrain from personal attacks and stay on topic. To learn about our commenting policies and how we moderate, please read our Community Guidelines.