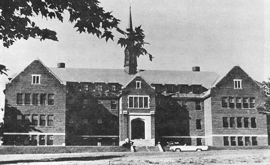 The memorial was unveiled today at a ceremony at the head office of the Union of Ontario Indians as part of the “Honouring Our Children, Families, and Communities affected by Indian Residential Schools Project” initiated by the Truth and Reconciliation Commission.

The TRC was created following the June 11, 2008, apology by the Government of Canada for the damage caused by the network of 139 government- operated schools.

“I really see this monument as a testament to the resilience of our people. We should take that collective strength that the residential school survivors have exhibited, refuse to be treated as victims, and take control of our own destiny. We should look at the monument as a symbol of strength, not of victimhood. It's also to remind visitors to our UOI headquarters that residential schools are a part of their history, as well as ours, and should not be hidden.”

The Grand Council Chief cited a widespread lack of understanding – even among Anishinabek citizens – about Canada’s attempts to use residential schools to forcibly assimilate First Nations children.

“We know that it has only been recently that the truth about Indian Residential Schools has started to be told and documented. We also know that provincial and federal schools have limited and inconsistent curriculum on the subject.”

The Anishinabek Nation project includes a variety of educational resources that document the history of the residential schools, the children who attended them and the inter-generational trauma that resulted.

Materials include a fictitious narrative picture book available in English, French, and Anishninaabemowin that tells the story of a girl who attended Indian residential school, four videos, including one in Anishinaabemowin, about the Indian Residential School system and its effects on the Anishinabek Nation, survivors and their families, and information booklets about inter-generational trauma, the history of the schools and educational resources on the Indian Residential School system.

An educational website will be created to house all of these resources, plus information on the Government of Canada’s apology, settlement agreement, compensation, and health resources.

The Anishinabek Nation established the Union of Ontario Indians as its secretariat in 1949.