Mayor says he will intervene in firefighter dispute with city admins

Mayor Christian Provenzano said it is time to put the issue behind us
Nov 21, 2016 11:40 PM By: Kenneth Armstrong 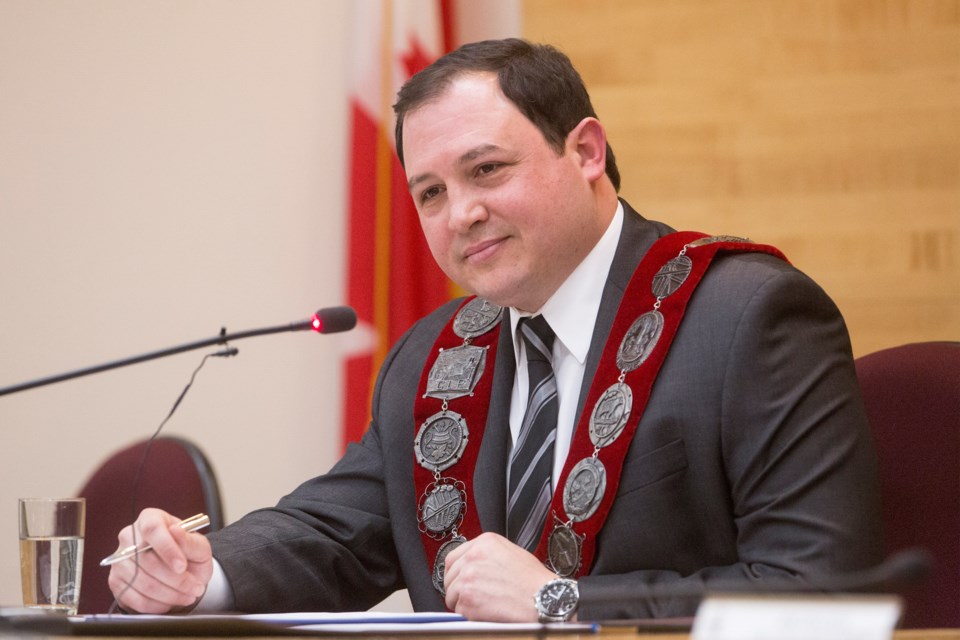 Provenzano made the statement immediately prior to council voting on a motion seeking to have city staff report on the feasibility and cost of initiating a comprehensive risk assessment in 2017 — a full year earlier than planned.

The Sault Ste. Marie Professional Fire Fighters Association (SSMPFFA) originally asked that such an assessment be done prior to council’s Oct. 2015 vote to realign the fire services, and has continued to ask for one to be completed in the year since the plan was implemented.

As with the vote on the original realignment plan — which will see a reduction in 20 firefighters by attrition over three years — tonight’s motion to accelerate the comprehensive risk assessment process, which was tabled by Ward 6 councillor Ross Romano, had split support within council.

The split was not lost on Provenzano, who promised to get more involved in the negotiation process between city administration and the union — something he said he has avoided up until now.

“This issue has to come to a head, for the betterment of our community and for the betterment of the amount of time we are spending on it. I want to assure council that I have heard you and that I will as of now take a different approach myself to try and find a resolution to this issue,” said Provenzano, immediately prior to the vote.

The motion to seek a feasibility report from staff in 2017 was defeated by a vote of 8 to 4.

Prior to the vote, Ward 1 councillor and former Mayor Steve Butland said the loggerheads between city administration and the firefighter is the worst situation he has seen in his 30-plus years in government, and has led to a toxic environment.

Immediately prior to tonight’s meeting at the Civic Centre, the SSMPFFA sent a letter to mayor and council disputing many of the points made tonight doing a report by Fire Chief Mike Figliola.

The chief’s report had been made available Friday as part of city council’s agenda package.

Ward 1 councillor Paul Christian said the decision to reduce the amount of firefighters per truck from four to three has been at the core of a lot of problems with the plan, including a recent Ministry of Labour order the city must comply with by Jan. 27, 2017.

The order was made in regards to  changes to the operating guidelines for firefighters making an interior attack of a single-family dwelling.

City CAO Albert Horsman said the ministry is seeking clarification on that one guideline and that there is no clear and imminent danger.

“We didn’t address it, it was pointed out by the ministry. It seems to me we should have been on this,” said Christian.

In the letter sent to mayor and council , SSMPFFA’s president Richard Bishop has a different take on the order than the CAO.

“This affects the department’s response to single-family dwellings, multi-family residential buildings, hi-rise buildings, nursing homes and long-term care facilities, industrial buildings, schools, arenas and commercial buildings. Essentially, we now have to wait for a second truck to arrive before we can make entry into a hazardous environment. ‘No impact on fire services?’” wrote Bishop.

During his presentation to council earlier in the meeting, Figliola faced questions from councillors about the comprehensive risk assessment, the Ministry of Labour Order, an increase in firefighter injuries over previous years and the composition of units called to the scene of a fire and their response time, among other questions.

Figliola said part of the reason for the realignment of fire services was to put more of an emphasis on public education.

“Our response time is very good, but at the end of the day if you don’t have a smoke alarm in your home and an escape plan, it doesn’t matter how fast we get there, we’re not going to help you,” said Figliola.

He added, “we have a four-minute response time, and a fire that is going unchecked — in two minutes you are going to be asphyxiated and carbon monoxide adheres to your system 500 times more than oxygen.

“You’re not going to get out and you’re probably not going to survive. I know that sounds harsh, but that’s the reality of people dying in fires.”

Figliola did not mention in his report or in his presentation the successful rescue of a man by city firefighters on Aug. 18, 2016 from inside of a burning home on Anita Boulevard.

One firefighter was injured in that fire.

Figliola’s report showed an uptick in injuries sustained by firefighters in 2016, but noted the increase was not ‘significant’

Bishop’s letter took issue with that statement as well.

Despite the failure of the motion seeking an acceleration of the comprehensive risk assessment, it is still planned to be completed in 2018 at the end of the fire services realignment process, said Horseman.

Immediately after the public portion of tonight’s meeting of council, SooToday asked Provenzano why he is stepping in to try and find common ground between the union and city administration.

Provenzano said he has tried to be respectful of city administration’s role in negotiating with the union, but it is time to put the issue ‘behind us’.

“Administration has had this for a year and we still don’t have it in place where we have the cooperation council evidently wants to see between the two parties,” said Provenzano.

“I think it’s my responsibility at this point to step in and try and bring them together,” he added.