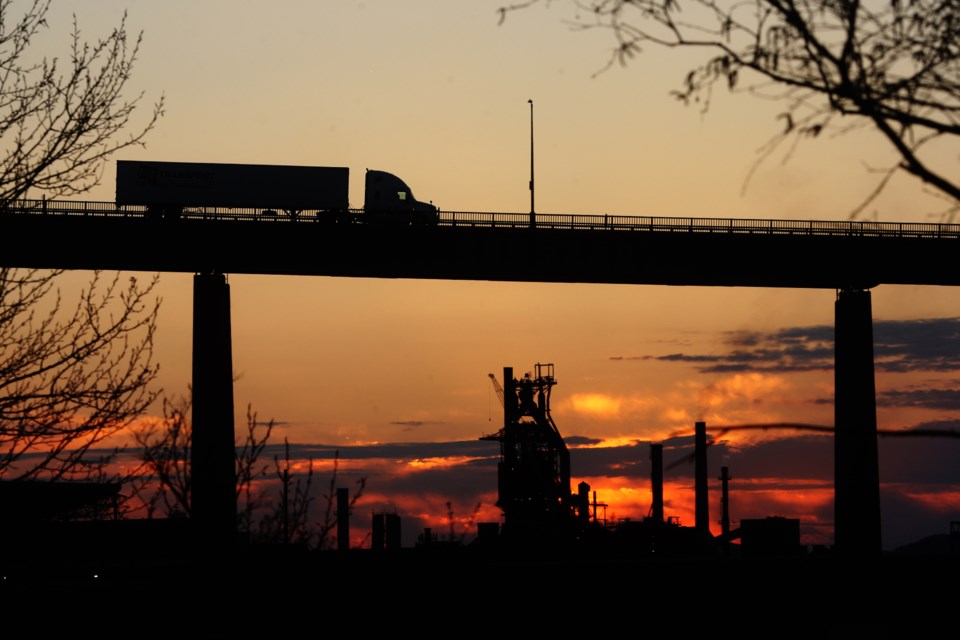 A transport truck drives toward the Canadian point of entry on the International Bridge at sunset with Essar Steel Algoma in the background. Kenneth Armstrong/SooToday
A Toronto-area man was found guilty Friday of human smuggling offences for trying to bring three Nigerian nationals into Canada at the Sault Ste. Marie International Bridge two years ago.

Tamba Gbamanja Junior was convicted of two counts under the Immigration and Refugee Protection Act.

Ontario Court Justice John Condon ruled that the Crown had proven beyond a reasonable doubt that the 31-year-old conspired with another man to bring the trio into this country, using Canadian passports issued to other individuals.

As well, Gbamanja aided and abetted in bringing them into Canada on April 15, 2017 in a manner that contravenes the act, the judge found.

Condon's decision followed a seven-day trial in May, during which the court heard testimony from 11 Crown witnesses, including eight Canada Border Service officers.

Gbamanja took the stand in his own defence and was the only witness called by his lawyer Katie Scott.

Desalu, a Nigerian-born Canadian citizen, pleaded guilty in December to an offence connected to the incident, and was serving a 11-month jail sentence when he testified.

He told the court the two men drove to the Sault in a rented vehicle, spent the night at a local motel and Gbamanja then crossed into the U.S. the following morning.

Gbamanja travelled to Ann Arbor, Mich., where he picked up five people, and then drove back to the Upper Peninsula.

He paid for a motel room in the Michigan Sault for two of his passengers, who didn't have Canadian passports, and drove across the International Bridge with the other three.

When he arrived at Canada customs at 9:20 p.m. he was detained after a border officer scanned the group's passports and found there were flags on two of them.

When Gbamanja was searched, officers found he had a pocketful of receipts that chronicled his 12-hour return trip that day.

As well, the accused had a rolled-up wad of approximately $2,000 in American currency.

In a 55-page written decision, which Condon didn't read in court, the judge reviewed the evidence of all the witnesses.

He described Desalu as "a manipulative and unsavory character whose evidence cannot be trusted and must not be relied upon."

Condon pointed to multiple inconsistencies in the man's testimony, but also said Desalu had inside evidence that was corroborated by other witnesses.

The judge noted that even if the court doesn't believe Desalu, there is other evidence that Gbamanja "knew or was willfully blind to the illegal nature of his actions."

He had knowledge that the people he was transporting were coming into Canada when it was not lawful for them to do so, Condon noted.

The accused's evidence had a "significant number of areas" that lack credibility, he concluded.

Following Gbamanja's conviction, Narissa Somji, a lawyer with the Public Prosecution Service of Canada, asked the judge to revoke the man's bail, and detain him in custody until sentencing.

Gbamanja faces a mandatory minimum sentence of three years in prison, the federal prosecutor said, also indicating the Crown won't be seeking any more time behind bars than that.

Somji argued that the offender is a high-flight risk, and if the court isn't inclined to remand him into custody, he should be ordered to surrender his passport.

As well, the Ottawa-based Crown maintained this is a serious offenced that involves five migrants being brought into Canada without proper identification.

"Confidence in the administration of justice warrants his detention," she said.

Scott countered that her client has been on judicial release, on his own recognizance, since 2017 and has showed up in court in every day.

"The evidence shows he's not a flight risk," the Toronto lawyer said, pointing out he has no prior criminal record.

Gbamanja is a Canadian citizen, but no longer has a passport because it has been seized, she said.

Gbamanja, who was born in Sierra Leone in West Africa, spent five years in Lagos, Nigeria before coming to Canada in 2004. He became a Canadian citizen seven years later.

"Just because this a serious offence doesn't mean Mr. Gbamanja should be put into custody immediately," Scott said.

Revoking bail can have a serious impact on her client, who has a three-year-old son that he needs to make arrangements for, she said.

Somji told the court he currently doesn't have a passport, but has applied for a new one.

Condon rejected the Crown's request, pointing out Gbamanja is employed, has a young child in this country, a history here and health issues stemming from a motor vehicle accident

The judge also noted there is no accusation that he has been involved in any other criminal activity.

As well, Gbamanja can't possess or apply for a Canadian passport, or a passport or visa from any other country.

His outstanding application for a Canadian passport is on hold, but if he is given a passport, he must immediately hand it over to the RCMP, Condon ordered.

Sentencing was put over unti Oct. 15 so that a pre-sentence report can be prepared.