Lawyers to argue whether fatal Morin Street shooting was self-defence

The Crown says the accused's father was stabbed in the back during the incident
Feb 21, 2020 4:30 PM By: Linda Richardson 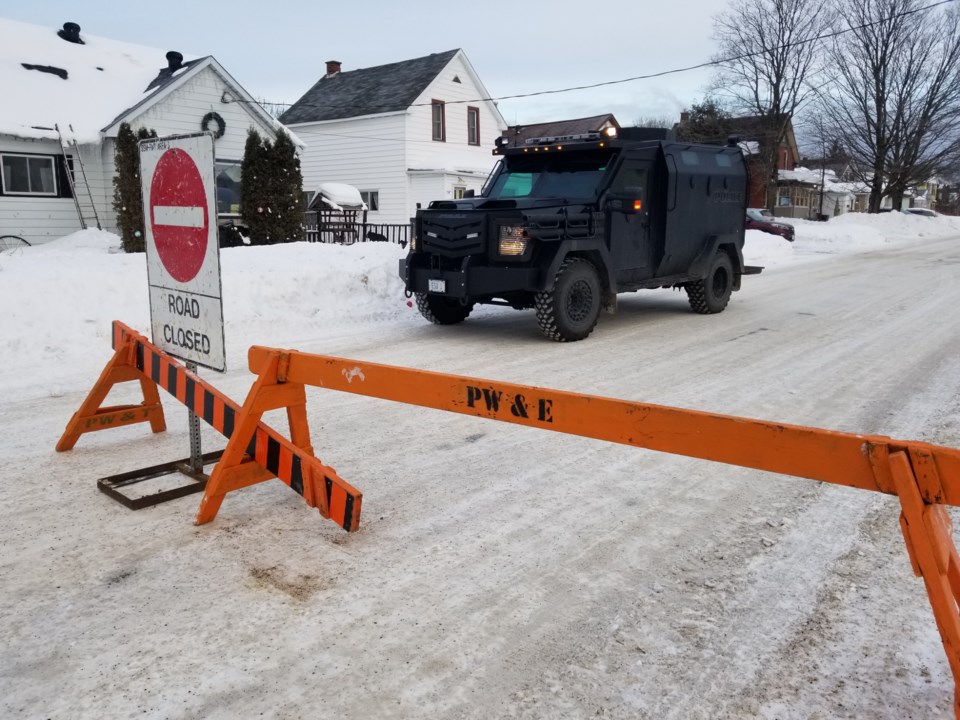 James Hopkin/SooToday
Two years after a fatal shooting linked to a home invasion at his Morin Street residence, Joshua McCabe has pleaded not guilty to manslaughter.

The 33-year-old Sault Ste. Marie man is charged in connection with the Feb. 10, 2018 death of Christopher Swanson.

He also pleaded not guilty to discharging a firearm reckless to life and safety at the outset of his trial before Superior Court Justice Edward Gareau.

On Thursday, assistant Crown attorney Trent Wilson gave the judge a thumbnail sketch of the case, outlining what occurred in the early morning hours of that day.

As well, with the agreement of defence lawyer Don Orazietti, he provided the court with a multitude of material, including a statement of the facts, a transcript from the preliminary hearing and exhibits, such as photographs, a diagram of the home, police officers' notes, video statements, and a surveillance video from outside the Sault Area Hospital emergency department.

McCabe was at his home, along with several friends and his father who had dropped by, when three individuals entered the residence, Wilson said.

They pushed their way in through the door and had at least two weapons — a large machete and a smaller folding knife.

McCabe's father said something to the uninvited guests, who went into another room to talk with two people who were in there.

At some point, he was stabbed in the back, and "the evidence will demonstrate" that his son went to his bedroom and retrieved a rifle, the prosecutor said.

McCabe asked the individuals four or five times  "you want to get shot?" and then fired in their direction, Wilson said.

Swanson was hit in the chest, and was taken to hospital in a car.

The 23-year-old man was deceased when he arrived at emergency.

The Crown called only one witness, a city police identification officer, who was involved in the investigation, and took photographs at the scene and the hospital.

Const. Bradley Sweet was responsible for bringing the exhibits to the trial.

He provided the court with reports on blood swabs taken from the driveway of the Morin Street house, the handle of the machete and the folding knife, as well as a DNA sample from Swanson.

He also showed Gareau the machete, along with packages that contained the knife and a balaclava, which were located in the Cadillac that transported the deceased to the hospital.

Orazietti said he was calling no defence witnesses.

Gareau adjourned the proceedings until March 6 at which time the lawyers will make their submissions, with their arguments centring on the issue of self-defence.

In an interview outside the courtroom, Orazietti said there is not a lot of disagreement about what happened that night.

"The Crown is challenging whether it is self-defence when a person is the subject of a home invasion involving three masked men with a machete and where a family member is injured," the veteran lawyer said.

The defence position is pretty clear, Orazietti said. "He fired one shot in self-defence hitting a person standing outside (the house)."

Wilson said he had no comment when asked about the issue.

McCabe was initially charged with second-degree murder in connection with the death.

Following a preliminary hearing in June 2019, he was committed to stand trial on the manslaughter charge.

A month after Swanson's death police arrested two men charging them with several offences stemming from a home invasion linked to the fatal shooting.

Dallas Solomon, 24, and Branden Hartling, 27, were charged with break and enter with the intent to commit robbery, assault with a weapon, assault causing bodily harm and wearing a disguise with intent.

At a 2019 trial, Ontario Court Justice Romuald Kwolek acquitted the pair on the charges.

Accused in Morin Street shooting to be tried for manslaughter
Jun 3, 2019 8:00 PM