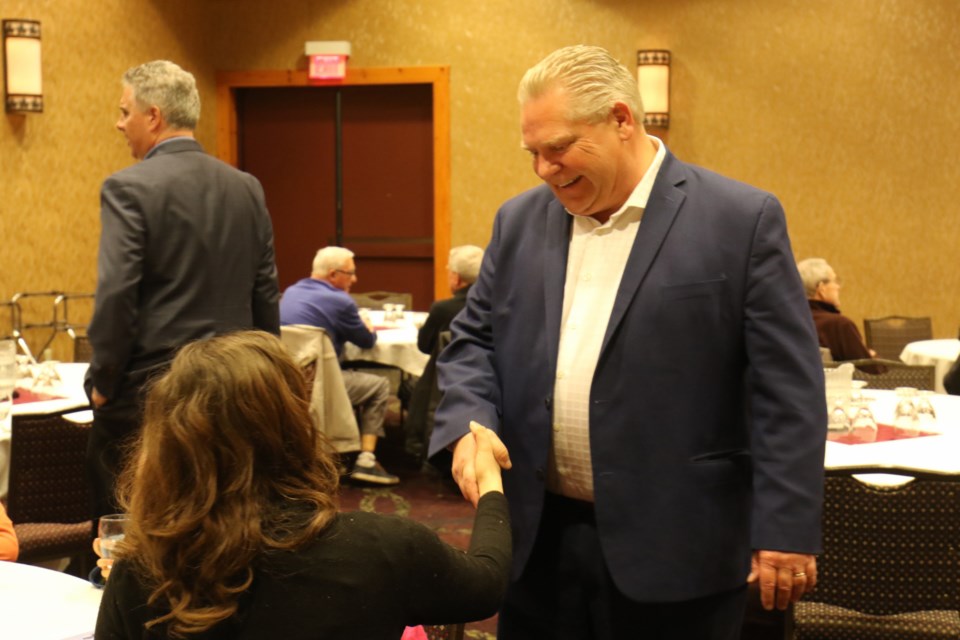 Doug Ford spoke to supporters during a rally at the Water Tower Inn in March morning. James Hopkin/SooToday
NEWS RELEASE
PC PARTY OF ONTARIO
*************************
TORONTO - Ontario PC Leader, Doug Ford, appointed candidates for the 11 remaining ridings for which a nomination meeting had not been scheduled.

“Help is on the way. We are only 47 days away from defeating Kathleen Wynne’s government and giving Ontario the change it needs” said Doug Ford.

“We have a strong team of candidates who are committed to delivering change that works for the people. It’s time for a government that respects the taxpayer, a government that keeps its promises and puts money back into your pockets,” Ford added.

The following individuals have been appointed as Ontario PC candidates for the upcoming 2018 Ontario Election:

Jib Turner (Algoma-Manitoulin)
Born and raised in Little Current, Jib Turner is a fifth-generation owner of Turners of Little Current Ltd. Jib and his wife, Debbie, were the recipients of the 2017 President’s Award for Economic Development from the Elliot Lake and District Chamber of Commerce.

Doug Downey (Barrie-Springwater-Oro-Medonte)
Doug Downey was born and raised in Simcoe County. He is a lawyer and former host of his show, Politically Speaking, on Rogers TV which updated the community on important issues. Doug has served as a Progressive Conservative organizer in Simcoe County for a number of years.

Ray Ferraro (Guelph)
Ray Ferraro is a former Guelph City Councillor and a lifelong community resident who is passionate about serving the people. Ray worked with the Ontario College of Podiatrists and Chiropodists for 10 years, and as a local real estate development consultant.

Mike Harris Jr. (Kitchener-Conestoga)
Mike Harris Jr. has strong roots in the Ontario PC Party and lives in the Kitchener-Waterloo Region with his five children and wife Kim. As a small business owner, Mike knows about the challenges that small businesses have faced under this Liberal Government.

Andrew Lawton (London West)
A former radio personality with 980 CFPL, Andrew is a long-time conservative activist and London-area resident. Andrew is a vocal advocate for mental health and has publicly spoken about his struggles with depression.

Colleen McCleery (Ottawa Centre)
Colleen McCleery is a management consultant who holds a medical degree from Ross University School of Medicine and an M.B.A. from Queen’s University.  Colleen also holds a Bachelor of Applied Science in Systems Design Engineering from the University of Waterloo. A long-time resident of Ottawa, Colleen has a strong understanding of both the private and public sector.

Christina Mitas (Scarborough Centre)
Christina Mitas is a Masters of Arts candidate in Leadership and Policy at the Ontario Institute for Studies in Education (OISE) at the University of Toronto, and serves as the President of the OISE Alumni Association. Christina is passionate about increasing female participation in politics and serves as an Ontario PC Women in Politics Director.

Roshan Nallaratnam (Scarborough Guildwood)
Born in Sri Lanka, Roshan has served as a police officer with the Toronto Police Service for the past nine years. Roshan holds a Bachelor of Computer Science and is a loving husband, and father to three children.

Gary Ellis (Scarborough Southwest)
Gary Ellis is a former high-ranking police officer in the City of Toronto, who served as the superintendent of Scarborough’s 42 Division. Gary currently serves as the head of the Justice Studies program at the University of Guelph-Humber.

Andrew Kirsch (Toronto-St. Paul’s)
A father of two, Andrew Kirsch has led a career as a dedicated public servant in both the Federal and Provincial Governments. A graduate of Brown University, Andrew has also served as a reservist in the Canadian Forces.