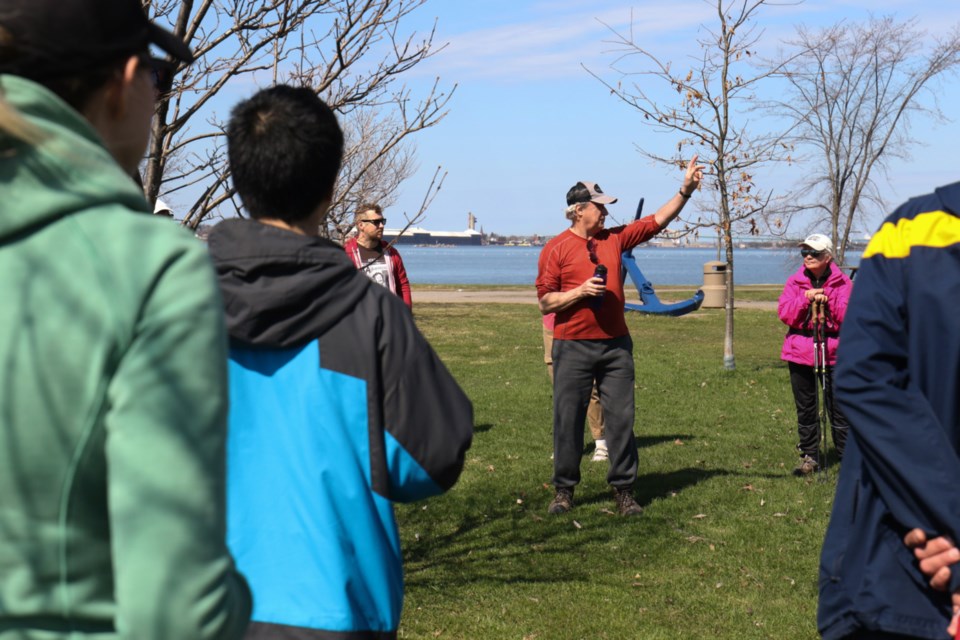 As people began to gather Sunday morning for the Jane’s Walk from Topsail Island to Queen Street Cemetery, facilitator Michael Burtch said it was a survey carried about by Alexander Vidal in 1846 that served as a double-edged sword for Indigenous people residing along the St. Marys River.

The Vidal survey was instrumental in affirming Metis rights in Supreme Court, but it also paved the way for non-Indigenous settlement of the area.

“From Whitefish Island to here, this was all settled by Indigenous and Metis people, and he [Vidal] recorded all of their names - where they lived, and what their plots were like, including Ermatinger and various graveyards,” Burtch told SooToday. “In 2003, the Supreme Court of Canada used that survey in the Powley case to help define Metis rights.”

“The Vidal survey was originally done to sort of become incentive for settlement,” he continued. “It sort of was a two-edged sword. It was used, frankly, to push Indigenous people off the land, and through time it became the proof there was a significant community here.”

Burtch pointed towards an area of Bellevue Park where a stake from the Vidal survey used to be. He feels that the spot should be marked off again - perhaps in the form of a plaque - in order to acknowledge the historic site.

“There used to be - and there isn’t anymore - a stake that was from an 1846 survey by Alexander Vidal, which sort of marked the limits of what would become the village, the town, and then the city of Sault Ste. Marie,” he said. “That’s been removed, but interestingly enough, it’s still - in my understanding - in public works in safe keeping.”

Burtch kicked off his Jane’s Walk tour by talking about an 1836 painting by George Catlin entitled Canoe Race near Sault Ste. Marie, which currently resides in the Smithsonian.

The painting, he says, was one of just three works - that he knows of - done by Catlin during a stopover in the Sault en route to Minnesota.

One of those paintings depicts a view of the settlement of Sault Ste. Marie from the top of the Pim hill, and it also served as Burtch’s segue into his tour of the Queen Street Cemetery, a designated historic landmark that is the last remaining 19th Century rural municipal cemetery in the city.

“It’s designated, but it needs constant upkeep,” Burtch said of the cemetery. “My late wife, she actually donated a book of history that she’d written about the area, the proceeds, to keep that up.”

That program - which assists in the replacement, restoration and maintenance of plaques, monuments and historic cemeteries in Sault Ste. Marie - also enabled Burtch’s wife to conduct an electromagnetic survey in 2003, which uncovered around 200 unmarked graves, Burtch says.

Jane’s Walk guided walking tours were inspired by urban activist and journalist Jane Jacobs, who died in 2006 at 89 years of age.

Jane’s Walk festivals and events happen in cities throughout the world during the first weekend in May.