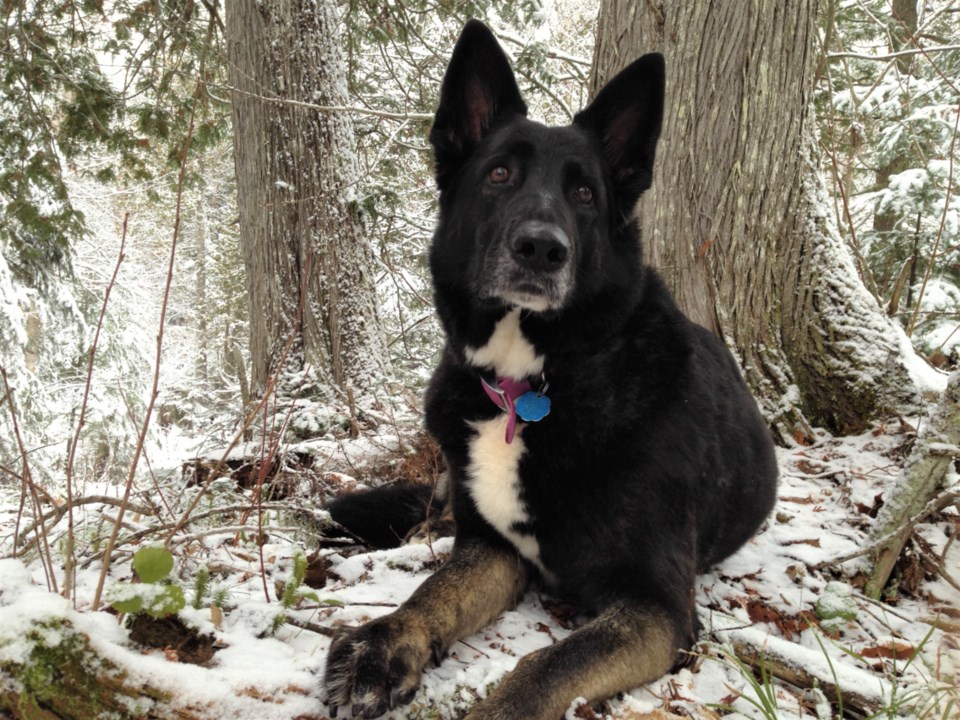 Louise Robillard and partner Andy Chyc were in disbelief when their dog, Shelby, was chosen as the recipient of the 2019 Foreign Loyalty Award during the 58th Annual Premio Internazionale Fedelta del Cane - also known as the international dog loyalty awards - held in Italy last week.

The award, which was bestowed upon Shelby for her bravery in saving Robillard from a potential bear attack last spring, was accepted by Robillard and Chyc via Skype appearance during the awards program held on Friday in honour of Saint Rocco, the patron saint of - among other things - dogs.

Robillard told SooToday that she intends on putting the award - which is supposed to be shipped from Italy sometime in the near future - right next to Shelby’s medal of honour she had received earlier this summer from Purina for her act of courage and bravery.

But this time around, the award was being presented posthumously.

Shelby died this past July due to ongoing complications arising from an autoimmune disease.

“It’s nice to see that she’s recognized in a country overseas like Italy,” said Robillard. “We are quite touched by that.”

“It was really hard to lose Shelby. She was a big part of our life.”

Shelby was a three-year-old former stray when Robillard and Chyc acquired her from the Humane Society in 2008.

The couple wanted a bigger dog to protect their property on Old Garden River Road from the growing threat of coyotes and foxes.

Shelby did just that, getting in between Robillard and a bear on a couple different occasions.

Then, on April 30, 2018, Shelby sacrificed her own safety by getting between Robillard and a bear after they had encountered some bear cubs while walking a trail on Robillard and Chyc’s property.

“She interpreted it as a threat to her cubs, and she just charged,” Robillard recounted. “Shelby, she just stood her ground in front of me, and the bear just hit her.”

“They were rolling and rolling, and just ended up disappearing in the bushes. Shelby was just howling and howling.”

Robillard says the howling stopped soon after, leaving her to wonder if her dog was dead.

“She came out from the other end of the bush - she’s crawling out and trying to make it home,” said Robillard. “She was opened up really, really badly.”

Shelby underwent emergency surgery, requiring more than 50 stitches to close her back up.

Some of her muscles were detached from her spine, and she needed six drains placed in her back to drain the infection.

“The wounds were so deep, she had to heal from the inside out,” Robillard said.

Although it appeared as though Shelby was on the road to recovery, the chain of events that began with the bear attack had taken their toll on the German Shepherd and Chesapeake Bay Retriever mix.

Although heavily medicated and relatively pain-free, Shelby got to a point where couldn’t eat, and couldn’t stand up.

“In the wintertime she developed an autoimmune disease condition, and about three weeks after we came back from Toronto - from the Purina ceremonies - she started getting weaker and weaker,” said Robillard. “The strength just left her, and it was time for us to let her go.”

“She’d had a pretty tough year.”

Robillard says the posthumous award that was bestowed upon Shelby in Italy last week takes on even more meaning now that she’s gone.

“They asked for huge applause for Shelby’s memory,” she said. ”It just catches you in the throat, you know?”

“It was such a lovely tribute.”

Robillard says Shelby “put a mark on her soul.”

“It was a true sacrifice for her,” she said.