Huge fight erupts at Algoma U 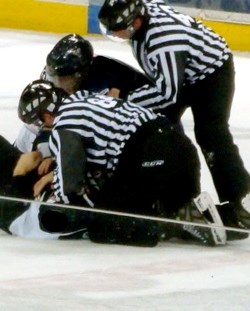 A hockey enthusiast, Robinson had been keeping close tabs on the fighting debate that developed after the death of Don Sanderson.

"I decided to put my money where my mouth was, $10 that is." said Robinson. "I bought a domain name for that amount, put in the same number of hours of work and launched a viral marketing and social media campaign. I thought it would be a great learning experience for my students as well, showing them what you can do with an Internet connection, $10 and 10 hours work."

Robinson created [a] website, asking users to sign a petition to ban hockey fights, and get back to Olympic or playoff-style clean hockey.

Both allow hockey fans to take a stand against fighting in hockey, and post comments further fuelling the debate.

She felt that they seemed more focused on disagreeing with her position on the debate than understanding the potential of an inexpensive website for a cause or a company.

"There's no way I'm signing that petition," said Stephens, a fourth-year Bachelor of Business Administration student at Algoma University. "This sort of thing is what is ruining our game."

And with that comment, Robinson threw down her stick and gloves and challenged Stephens and Olive to create the counter-site for their midterm project.

"I thought, what a great opportunity to drive the concept of marketing on the Internet home," Robinson commented.  "They didn't care what it took to learn the technology, they just wanted to pound my site - one was even e-mailing me at midnight on a Friday night still working on it."

Olive and Stephens quickly launched [a website] and a Facebook group as well ("Keep Fighting in Hockey").

Only 24 hours after their launch, the students' Facebook group was beating up on Robinson's group, created a week prior.

Both websites have received a good response in numbers of petition e-signatures from across Canada and the United States.  "The process was a really invaluable learning experience," commented Brock. "It's not often in a classroom setting that you can truly experience what working in your field of study can be like."

Stephens added: "Lesson learned. We've made $3 on advertising on our site, but you just can't put a price on the experience. If she thinks this is over, it's not.  We're going strong until we make enough noise and keep hockey the way it should be - fighting and all."

The students are hoping to catch the eye of Don Cherry, to deliver the winning blow in the online battle.

"They learned about search engine optimization, blogs, websites and how to monetize them, launching viral marketing campaigns and utilizing social media, with only a bit of guidance from me," beamed Robinson proudly. "It's not if you win or lose the fight, it's how you play the game . . . either way, I win!"

Algoma U is committed to offering a personal education experience unlike any university in Ontario.

As the Canadian home of the internationally recognized MSc CGT from the University of Abertay Dundee, Algoma University is at the forefront of computer games technology education.