How long do you have to live here before you're allowed to be mayor? 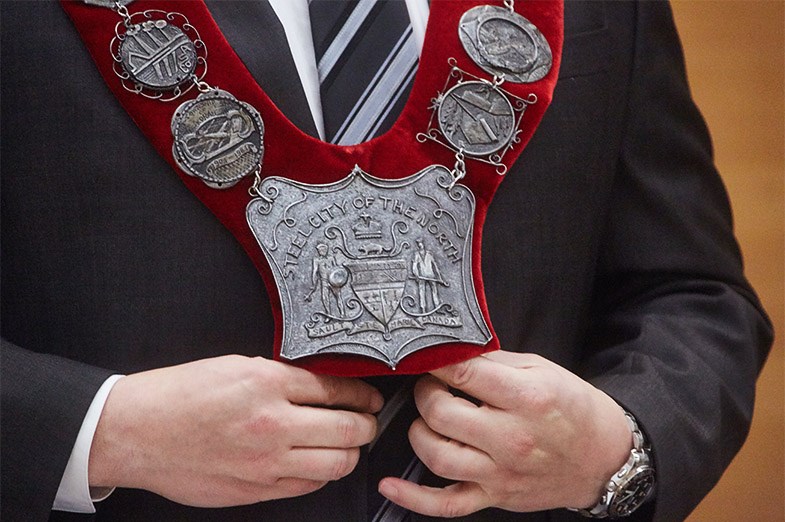 The late Ward 6 councillor Frank Manzo used to accuse people who weren't from around here of being 'carpetbaggers' – a U.S. pejorative term for outsiders or newcomers meddling in the politics of a place where they have no roots.

It was originally used to describe people from northern states who moved south after the Civil War, often seeking lucrative opportunities as southern states reconstructed their economies, often carrying cheap luggage made from carpet fabric.

But Provanzano did question whether challenger Rory RIng should be running for mayor after moving here just two years and nine months earlier.

"I think that comes through bringing some experience, by recognizing that there's an opportunity for change," said Ring, currently on leave as president and chief executive officer of Sault Ste. Marie Chamber of Commerce.

"You need a lot more of this young lady here [gesturing toward his campaign manager Jane McGoldrick, owner of the Queen Street eatery J. Caroline's] who has returned to this community, invested in downtown and is committed to make a future here. I am here committed for a future. I am here to bring about what I believe will get us off the shore and into that powerboat that's blowing by us. I sat here on the shores of the St. Marys and watched those powerboats go by. I'm Sault Ste. Marie and I'm standing still. I've got to get off the shore and into that boat because....if you're standing still the world has gone by you. That is why I'm standing here today, sir. And I have instilled myself in this community as a citizen."

Legally, there's nothing stopping a come-from-away from running for municipal office.

The following are the eligibility requirements for mayoral or City Council candidates:

The following are disqualified from running for mayor or City Council:

In his rebuttal, Mayor Provenzano followed up on Ring's reference to this year's arrival of the Can-Am President's Cup Poker Run powerboat races:

"It's a number of times I've heard about this boat race. I'm pretty proud of the boat race because that's something new that's happened over this term of council. I think what we've done, this council, is we have really started embracing our future and moving forward....There's no doubt about my commitment to this community. There's no doubt about my investment in this community," the mayor said,

By the weekend, Ring was expressing umbrage at the mayor's debate question.

"Given the mayor thought it was perfectly acceptable to hire two police chiefs, a fire chief and a chief administrative officer all from out of town, it seems somewhat contradictory when it comes to the position of mayor," Ring said in a written statement issued Saturday.

"In what were surprising comments by the mayor during a recent debate, he directly implied that if you have not lived here for generations, you don’t have a right to represent the community. Coming from someone who is expected to be welcoming of others to the community, especially if we are to grow our city and our economy, Sault Ste. Marie cannot afford this type of attitude from anyone in a position of leadership."

"What the mayor did communicate was, we want you to come to Sault Ste. Marie and pay your taxes, but we don’t want you to participate in the political process, be engaged citizens, or ask too many questions because the old boys' club and the status quo is working just fine."

"My belief is that the person best able to do the job and represent all citizens should be elected as mayor. Regardless of a person's gender, age, sexual orientation, race or religion. The choice voters make should be based on merit and certainly not how long they have lived here or whether or not their grandparents live here," Ring said.

Also running for mayor in the Oct. 22 election are Ted Johnston and Kemal Martinovic.