Ten minutes into William Phillips' film Treed Murray is a scene in which a hot dog vendor can be seen wearing a Movie Network (TMN) hat.
Feb 24, 2002 12:00 AM By: David Helwig 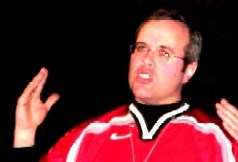 Ten minutes into William Phillips' film Treed Murray is a scene in which a hot dog vendor can be seen wearing a Movie Network (TMN) hat.

"For that, we got $20,000," the director told a sharp-eyed Saultite who spotted the logo during a Saturday-night screening at the Shadows of the Mind Film Festival.

Challenged as to whether it was a product placement, Phillips (shown above) confirmed that the TMN hat capped a deal that kept the $1.2 million Canadian production alive at a time when its future was in doubt.

TMN had already committed to pay for broadcast rights to the drama, but agreed to chip in additional cash for product placement to ensure the film was completed, he said.

When another observant Saultite enquired about the fictional brand of cigarettes preferred by the film's main character, Phillips explained that tobacco manufacturers aren't at all interested in paying to have their products used by someone who also uses crack cocaine and prostitutes.

Treed Murray, the story of a belligerent ad executive cornered in a tree by an angry street gang, is Phillips' first feature-length film.

Phillips portrayed his protagonist (actor David Hewlett) as a man as deeply flawed as the young hoodlums who harrass him in a Toronto park.

"We're all flawed. We're all the same," he said during a post-screening question-and-answer period at Station Mall's Galaxy Cinema.

The concept, six characters and a tree in a park, was specifically designed to keep costs down.

It turned out to be more costly than expected because a stunt co-ordinator was needed for each of the 10 days that Hewlett spent being filmed on a tree branch, Phillips told SooToday.com.

In addition to the film-festival circuit, Phillips' film has been screened commercially in Victoria, Vancouver, Toronto and Montreal.

Additional screenings are being considered in Calgary and on the East Coast, he said.

The Shadows of the Mind Film Festival is organized by a coalition of local agencies. It offers films that touch on the facts and mythologies surrounding mental health and addictions.

For full information about the festival, click on the SooToday logo at the top left of this screen and them click on the Shadows of the Mind link.

In a surprise development, organizers announced Saturday night that they're adding a second screening of Julien Temple's Pandaemonium, which was shown in connection with a gala opening on Thursday night.

The second screening will be 7 p.m. Sunday at the Galaxy Cinemas.