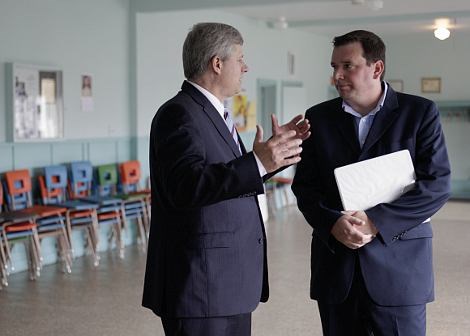 OFFICE OF THE PRIME MINISTER

ADSTOCK, QC - More Canadian families and businesses will have access to high-speed internet services thanks to a major new investment to extend and improve broadband coverage, part of Canada’s Economic Action Plan.

Prime Minister Stephen Harper today announced the next steps in the government’s strategy to expand broadband internet access to unserved and underserved communities throughout Canada.

“The potential benefits of expanded broadband services are enormous, particularly for the thousands of Canadians who live in rural and remote communities,” said the prime minister. “The jobs of the future will increasingly depend on people in communities like Thetford Mines having consistent and reliable access to broadband services such as distance education, telehealth coverage and new online business opportunities. These are services that more and more Canadians rely on; they should also be services that all Canadians can count on.”

The prime minister announced that the federal government has completed a comprehensive nationwide survey of broadband access to determine what regions have the highest need.

The Harper government will fund up to 50 percent of the costs for organizations selected to deploy broadband infrastructure and services to these areas.

The government will begin accepting applications from potential private sector partners this summer, and will select recipients by December 2009.

The key criteria for successful applicants include who can provide the best coverage at the lowest cost, create jobs, deliver within a set timeframe, and ensure a viable and sustainable business model for the future.

As part of Canada’s Economic Action Plan, the Harper government is investing $225 million over three years for Industry Canada to develop and implement a strategy to extend and improve broadband coverage.

The goal of this investment is to extend broadband service to as many remaining unserved and underserved Canadian households as possible.

As communities vary greatly in size, this program focuses on connecting households.

This method also provides a clearer understanding of service availability for Canadians; the fact that a community has broadband access does not always indicate the service is available to individual households.

Extent of broadband coverage in Canada

The CRTC reported that, at the end of 2007, 93 percent of Canadian households had access to broadband.

A significant gap exists, however; only 81 percent of rural households have broadband access, compared to virtually all households in urban areas.

While all households are within the range of satellite service, existing satellite capacity can provide service to only 1 percent of households.

Under the terms of the Harper government’s broadband strategy participating providers will be expected to provide broadband service of at least 1.5 Mbps to currently underserved Canadian households and businesses.

At 1.5Mbps, a customer can make a voice call over the internet, download an audio CD in seven minutes, and experience video quality streaming/videoconferencing.

Compared to lower speeds such as 256kps, at 1.5Mbps a consumer can use multiple applications at the same time.

For example, a consumer can make a voice over-Internet phone call at the same time as downloading a document.

Each of these services is particularly important to those who live in remote areas where local services are limited.

The government has just completed a comprehensive survey of Canadian households to determine where the gaps in broadband service are most acute.

This summer, the government will begin accepting applications from potential partners interested in expanding broadband service to these areas.

Final recipients will be selected by December 2009.

The selection process will primarily be based on lowest cost and greatest coverage.

The applicants must be able to demonstrate a capacity to deliver within the timeframe, and to ensure a viable business model.

Other factors will also be considered, including sustainability and future scalability.

Successful applicants will receive federal support equaling up to 50 percent of their one-time costs.

Such costs could include the purchase, adaptation or upgrade of equipment, hardware or software, long-term investments in network capacity (such as the lease of satellite transponder capacity), network deployment costs, and other costs directly related to extending broadband infrastructure.

The entire program will adhere to the following design principles:

Sustainability: Applicants must demonstrate that the proposal will be sustainable going forward.