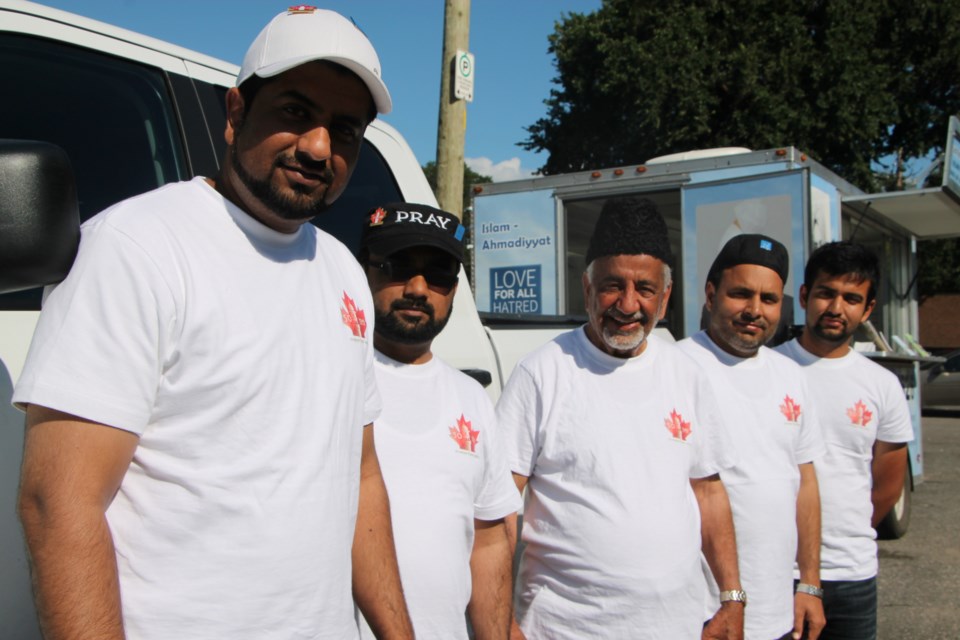 Omer Ahmed, of Ancaster, Ontario (near Hamilton) and fellow adherents of the Ahmadiyya Muslim Community, an Islamic religious movement, are travelling across the country to say 'thank you, Canada.'

Ahmed, accompanied by Dr. A. Momin Khalifa (president of the Sydney, Nova Scotia Ahmadi Jama'at, or congregation) and three other fellow Ahmadis from Toronto, stopped in Sault Ste. Marie Tuesday for an overnight stay as part of a 45-day cross-Canada trip, from East Coast to West Coast.

"We are celebrating 50 years in Canada (for the Ahmadiyya Muslim Community)…we are persecuted in Pakistan because of our beliefs, and Canada allows us to be free and gives us liberty to profess and worship and practice our faith, and because of that we want to thank Canada," Ahmed told SooToday.

Ahmed and his companions are travelling across the country in a truck towing a trailer which serves as an information booth for their faith.

"We want to tell people we're very thankful for all the liberty and freedom we have here…in Pakistan I wouldn't even survive a day if I tried to tell people about my faith," Ahmed said.

"In Pakistan if I wanted a drivers license or a passport I would have to write 'Ahmadi' on it, I cannot apply for certain government jobs because they say Ahmadi should not be allowed to do certain things and we can live with that, but then there are clerics…(who say) 'let's kill some Ahmadis to earn heaven.'"

"They think killing us will get them to heaven, there are some people who will not think straight and think 'let's kill them,'" Ahmed said, adding there is no protection from the Pakistani government.

"We've had people come up to us (here in Canada) and say 'thank you' for doing this because many of them don't know there are different groups within Islam…we're here to help answer any questions you may have about Islam or dispel any misconceptions you might have about Islam," Ahmed said.

"They think of us as something different from other Canadians, but we have nine-to-five jobs, we eat poutine and we like our steaks, but they don't know that," Ahmed said.

"The message is peace, love everybody in spite of the differences, love them," Ahmed said, in contrast to what he called "the Fox News version of Islam" portraying Islamic extremism.

"But when we come to Canada we have the right to practice our faith the way we want, so we're thankful to Canada for giving us that right."

There are approximately 40,000 Ahmadis spread across 90 Jama'ats in Canada, said Dr. A. Momin Khalifa.

The religion's main centre is in London, England, with almost 10 million practitioners in approximately 200 countries around the world, Khalifa said.

The group heads out to Thunder Bay Wednesday as it continues its cross-country tour.